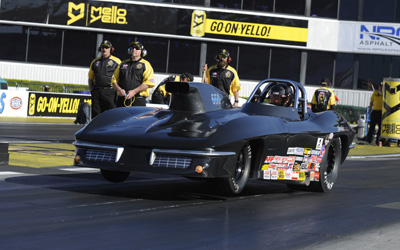 It certainly didn’t take long for the first double-up of the new season. At the Circle K NHRA Winternationals, the first of 25 national events to be contested during the 2017 NHRA Lucas Oil Drag Racing Series season, Utah’s Ed Olpin accomplished a feat every racer dreams of when he went the distance in two classes. Olpin, a multitime Division 7 champion and former JEGS Allstars winner, got off to a perfect start when he bagged both the Super Gas and Top Sportsman titles at the famed Auto Club Raceway at Pomona. With his dual wins, Olpin became the 21st driver to accomplish the rare feat, which has been achieved just 34 times. Incidentally, it was the first double involving the Top Sportsman class.

“Who’d have ever thought I’d start the year off like this? It was a whole lot of fun,” said Olpin. “Before the race, I’m not sure I could have guessed that we could do that. Then later in the day on Sunday when I was still in with both cars, I thought maybe there was some sort of a chance we’d get there. Last year in Sonoma, I got to a final round and a semifinal, and that was tough. This time, our schedule got jumbled because of the rain, but I was focused and not too nervous.” 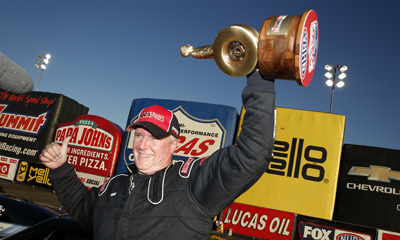 First up was the Super Gas final, and Olpin took care of business in a double-breakout battle against Robert Naber. Holding a .009 to .021 reaction time advantage, Olpin drove a textbook race with an eight-thousandths margin of victory at the finish line. The Pomona Sportsman categories were slightly out of sync due to rain earlier in the week, so there was a lengthy delay before Olpin returned to face former Comp racer Jeff Gillette in the final of Top Sportsman presented by Racing RVs.

As the last pair to go down the track, Olpin locked horns with Gillette in a memorable race. After identical .013 lights, Olpin tripped the win light by .0018-second with a 6.978 on his 6.96 dial. The Pomona double marked the fifth and sixth national event wins for Olpin, who has now won at least one national event in four of the last six seasons.

“I didn’t know I’d won the Top Sportsman final because I couldn’t see the win light,” Olpin said. “I didn’t know until I came around the corner [of the return road] and got stopped. It was hard to win in either class because both of those guys that I ran in the final are so good. Robert and Jeff are both great racers. I’ve raced both of them quite often. 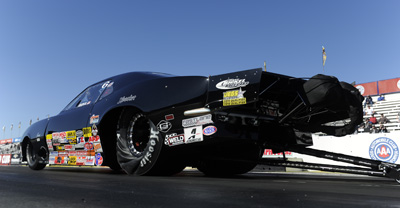 “We did have a long wait between the Super Gas final and the Top Sportsman final because they ran the Pros in between us,” said Olpin. “That actually worked in my favor because I could focus on one car at a time and not get too hurried.”

Olpin also pointed out that his winter preparation played a big role in his early-season success. Before heading to Pomona, he installed fresh engines and transmissions in both of his race cars.

“We had a little trouble with the Super Gas car on the first run when it lost a push rod, but after that, we didn’t have any other problems,” Olpin said. “Super Gas is a little easier because the Top Sportsman car requires so much maintenance between rounds. I’ve got to hand it to my crew chief, Ryan Anson; my son, Eddie; Steve Parsons; and the Blodgett family. All I can say is that I’m pretty honored. I never thought we’d pull this off.”

The best of the rest: The other five Sportsman champs crowned in Pomona in Comp, Super Stock, Stock, Super Comp, and Top Dragster all had one thing in common: They each had at least 10 national event wins heading into the 2017 season.

For many competitors, the Pomona opener represents a chance to shake the rust off after a somewhat lengthy offseason. In this instance, experience proved to be a valuable commodity with each of the champions having extensive final-round experience.

Comp champ Doug Lambeck has now won five of his 12 national event wins in Pomona, including back-to-back Winternationals Comp titles. Driving his D/SMA Sunfire, Lambeck triumphed over a small-but-talented 12-car field with a final-round win against Clint Neff’s K/AA roadster. The combination of a clean index and a perfect .000 light proved to be more than enough for Lambeck, who insured the win by running more than six-tenths under his index.

Now in his 12th year as a semi-regular competitor in the NHRA Lucas Oil Drag Racing Series, Justin Lamb is now sitting on 17 national event victories (against just six final-round losses). Lamb, a two-time national champion, wheeled his SS/AM Cobalt to a final-round win over Timothy Fletcher, who was driving his father Dan’s Peak ’69 Camaro. Lamb also saved his best run for last with a .005 light and an 8.638 on his 8.63 dial.

Texas-based Jerry Emmons decided to get an early start on his 2017 season and was rewarded with the Stock title after driving his Lucas Oil-backed ’69 Camaro to a win against Justin Jerome’s F/SA Duster. Emmons prevailed in a tough heads-up B/SA race against Chad Loge’s ’70 GTX in the semi’s and then returned to win the final with a 10.170 on his 10.16 dial. Emmons, who won his first national event in 1990, now has 15 full-sized Wally trophies in his collection, including an Indy win in 1994. 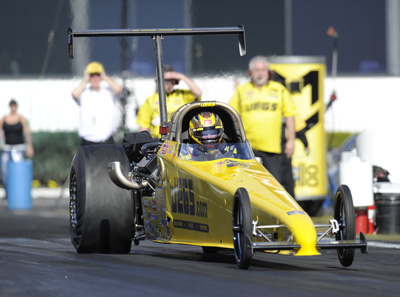 Steve Williams tried for years to win a race at his home event in Pomona, and he has now won the season opener for the last three years following his latest victory in Super Comp. The leader of the K&N Filters team, Williams won the Super Gas title in Pomona in 2015 and returned last season to claim the Super Comp title. He has now won 12 straight rounds of competition in the 8.90 class following his final-round win against Dave Alves. Like most of the Pomona champs, Williams was at his best in the final with a .008 light and an 8.903.

The Top Dragster presented by Racing RVs class featured a number of entries that flirted with the 6.00-second class limit, including eventual winner Mike Coughlin (pictured). The former two-time Division 3 champ decided to venture West to watch his brother, Jeg Jr., race in Pro Stock and his nephew, Troy Jr., make his Top Fuel debut. Deciding to bring along his ProCharger-equipped dragster, Coughlin was rewarded with his 14th national event victory. Already a winner in Pro Stock Truck, Super Comp, and Top Sportsman, Coughlin now joins the short list of drivers who have won in four different categories.