Practice Tree races have become a hugely popular way for racers to pass the downtime during the winter months. Here’s a look at a couple of the biggest and most successful ones in the country.
25 Jan 2017
Kevin McKenna, National Dragster Senior Editor
The Sports Report 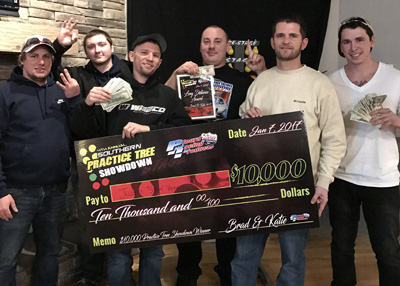 On Jan. 7, Justin Vickers won $10,000, and he didn’t burn a drop of racing fuel in order to do it. Vickers, who lives in Ohio, made the trek to Alabama for the 4th annual Practice Tree Showdown presented by Plourd Racing Products and emerged as the champion.

Using a pair of full-sized regulation Christmas Trees that are hooked to cockpit simulators, “racers” in practice Tree events compete head to head in an eliminations format with the best reaction time advancing. Each racer has the option to adjust the rollout to their liking. Not surprisingly, many competitors are consistently able to flirt with a perfect .000 reaction time, and a large percentage of the side-by-side heats are decided by just a few thousandths of a second. Unlike most real races, competitors in practice Tree events have the option to buy multiple entries, often as many as four for a single race.

At Plourd’s race, the starting field of 306 entrants was whittled down to just five with Rick Pennington, Christopher Martin, Matt Brehem, Jesse McKnight, and Vickers making it to the quarterfinals. Pennington and Martin bowed out first, and then Brehem was defeated in the semi’s. The final was decided via a red-light start with McKnight releasing the button too soon, allowing Vickers to claim the top prize.

Other events included a free race for kids, won by Lauren King over her friend Billy Vega. King, who claimed $100 for the victory, also won last year’s kids event. Team North won a $50 long-distance award after driving 760 miles (one way) from Pennsylvania. Adam Davis earned $50 as the last bottom-bulb racer left in the field. Davis, an NHRA Stock racer, made it down to the last 10 drivers. Bryce Edenfield also won $50 with the first perfect .000 reaction time during eliminations. That not-so-rare feat occurred just eight pairs into eliminations.

“We had another big turnout this year, and my wife, Katie, and I really appreciate everyone braving the roads and the weather,” said Plourd. “We had 306 entries for round one, and we were very pleased with that. I have to thank Jamie Southards, Danny Weaver, Matthew Holmes, Jared Pennington, and JJ for all their help. Todd and Leanne Campbell Ewing did a great job handling the 'time filler' as well.” 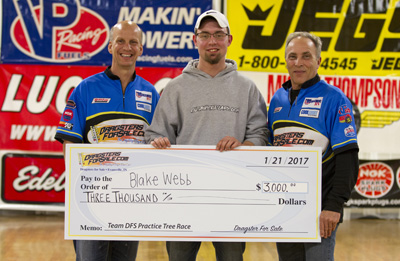 The first event was the Racing RVs Bottom Bulb event. Starting with 238 entries, the title was decided a few hours later when Neil Posey claimed victory over Shawn Rissler. Carson Griffith had the potential for a sweep with two entries still alive in the late rounds, but he lost twice in the semifinals.

The Top Bulb main event presented by Law Chevrolet featured 356 entries, including notables such as David “Bird” Jones and “Disco Dean” Karns, both of whom have been featured on the popular Street Outlaws television show. The final featured Brock Smith and Blake Webb with Webb taking home the $3,000 top prize. Ironically, Webb had earlier been the recipient of the “Mulligan Award” that allowed a racer to re-enter the event after they had lost a round. Webb used the mulligan in the round of 16 racers and went on to win the event.

There was also a separate race for an entry into the K&N Spring Fling event in Las Vegas, and it was won by part-time tractor puller Cody Wiggins, who defeated Jones in the final that featured .00 reaction times on both sides of the Tree. 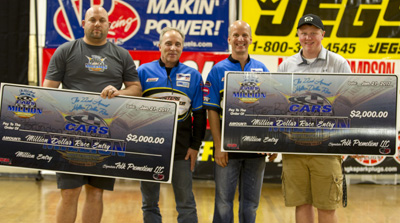 The final hours of the evening topped off with two entries into The CARS Protection Plus Million Dollar Race in Montgomery, Ala. Brandon Jarrell and Tyler Bohannon emerged from a field of 64 drivers to each claim an entry, valued at $2,000.

“We put this event on to get people out to visit their racing families that they normally only see eight months out of the year at the races,” said O’Neal. “The sight of racers winning one of the $8,000 in prizes really makes me happy. We ran for 12 straight hours, consumed 74 pizzas, 30 cases of cold beverages, and recorded over 800 runs on our Portatree practice Trees. Our evening could not have been a success without the great support of VP Racing Fuels, Mickey Thompson Tires, Lucas Oil, NGK Spark Plugs, Portatree, JEGS, Carts Gone Wild, Line First Racing Apparel, Performance Tees, Simpson, CoolShirt, Meyer Distributing, Auto Meter, Edelbrock, AFCO, Dynatech, Racepak Law Chevrolet, Racing RVs, Keith Berry, and Moroso. We’re ready to go racing for real, but at the same time, we’re also looking forward to our next event in 2018.”