The three that got away

Justin Lamb went to three final rounds in two weeks and lost all of them, but it would be hard for him to not consider his Sonoma and Seattle trip a success
09 Aug 2017
Kevin McKenna, NHRA National Dragster Senior Editor
The Sports Report 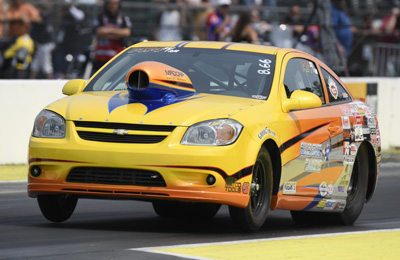 During a three-week swing that included the Division 7 Lucas Oil Series event in Sonoma, the Toyota NHRA Sonoma Nationals, and the NHRA Northwest Nationals in Seattle, Justin Lamb competed in five events. His combined record for the five includes a win, three runner-up finishes and a semifinal. For most racers, that would be a successful trip, but Lamb, a two-time national champ, prides himself on his ability to get the job done, particularly in final rounds.

“It’s both good and bad,” Lamb said of his recent trip. “I mean, how do you lose three final rounds in a row? Look, I lost twice to Jody Lang and he drove great in both races. He really made great runs and in Seattle, my Super Stock car just spun the tires. It’s frustrating but I try to look at the positive and remember that my worst finish in five races was a semifinal.”

Losing final rounds is never fun, but for Lamb, a couple of his losses were especially cruel. At the Sonoma national event, Lamb didn’t have a reaction time worse than .020 in his Super Stock car, yet he still came up a couple hundredths short against Lang in the final round. The Seattle Super Stock final was even more painful. Paired with Jeff Lane, Lamb cut a perfect .000 light but his normally reliable Cobalt spun the tires and he lost by .0008-second.

“If you had told me before the first race that I’d have a win, three runner-ups, and a semi, I’d have probably signed up for it,” said Lamb, who is now 17-9 in national event finals. “After the fact I’m sitting here thinking, ‘How did I just screw this up?’ It’s frustrating, but as I said Jody deserved to win both of those races. I thought I drove well as a whole, but he was much better. I’m not at all surprised to see him come out of this deal with two wins.” 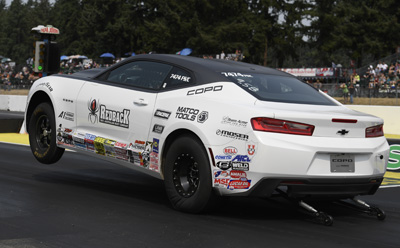 During the Sonoma and Seattle trip, Lamb elected to park his trusty D/SA ’70 Camaro Stocker and debuted a new 2017 model COPO Camaro. It was the first time he’s raced a car with fuel injection, but he managed to get the car sorted with a minimal amount of new car bugs.

“It’s a big learning curve going to one of these [fuel injected] cars,” said Lamb. “This car is quite a bit quicker than my old car so that played a big part in our decision. Roger Allen from GM was a big help with this project and I also went to Ben Strader’s EFI University. He’s the guy who helped a lot of Pro Stock teams get up to speed and I learned a lot there.

“I parked one of the best Stockers in the country, my ’70 Camaro, to race this car,” Lamb said. “I had a big debate with my dad [Chris] and we agreed that this new car had to be better than our old one or it was staying home.”

Reaching four final rounds had another unintended consequence for Lamb, who is not ranked solidly in the top ten in both Stock and Super Stock. While it could still be tough for him to catch leader Kevin Helms in the Stock battle, Lamb is very much in the running for the Super Stock title, and at the very least, a top ten showing in both eliminators.

“Up till now I had no interest in racing for points,” said Lamb. “Now, I’m going to be going to a few more divisional races. I actually have a higher average score than Jody [current leader Lang]. It really makes me made to lost that final because it was a big swing. I’d have 21 more points and Jody would have 21 less. That could be huge at the end of the year.”

The best of the rest: The Comp Eliminator field in Seattle featured just five cars and that number was reduced to just two after the first round because low qualifier Craig Schuck was unable to get his I/Dragster fired after it stalled on the burnout. Since Schuck could not stage, he was eliminated. That left Brian Hyerstay and Ryan Warter as the only two drivers left in the field. Technically, the semifinals became the final and Hyerstay dominated with a five-hundredths starting line advantage and a (-.788) 8.692 to overpower Warter’s competitive (-.422) 8.818 effort.

Lane has now won 11 NHRA national events including six at his home track, Pacific Raceways, after claiming the Super Stock title over Lamb. Driving the Cobalt that is normally raced by his son, Cody, Lane scored a critical quarterfinal win over Sonoma champ and fellow Division 6 ace Jody Lang to earn a bye into the final. It was also the third-straight year that Lane has won his home event counting his back-to-back Comp titles in 2015-16. 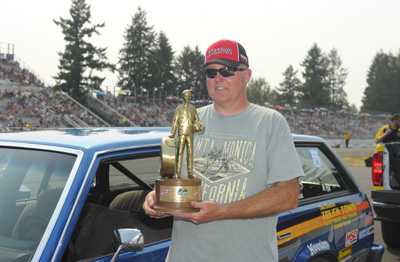 Jody Lang’s mini-version of the Western Swing was especially productive since he backed up his Sonoma Super Stock victory with a Stock win in Seattle. Lang scored career win No. 28 when he defeated Lamb in a competitive final. Driving his lumbering N/SA Malibu wagon, Lang matched his 12.32 dial with a 12.322, forcing Lamb into a breakout with a 9.685 on his 9.69 dial. Already the national points leader in Super Stock, Lang’s most recent victory has helped elevate him to the No. 2 spot in Stock, but he remains well behind runaway leader Kevin Helms.

Randy Beck’s first national event win in Super Comp was the result of a very solid driving performance that included a narrow win over Greg Taylor in the final round. In one of the best races of the day, Beck, the won of two-time NHRA Top Fuel champ Gary Beck, left first by a fraction, .001 to .006, and held on for the win by three-thousandths of a second, 8.935 to 8.933. The win was especially rewarding for Beck, who overcame a string of early round losses this summer to collect his first national event Wally.

The Super Gas final was also a very competitive battle with Dan Davis collecting his first national event title at the expense of Gene Kelly. Davis, in his ’95 Ford Probe, gained a slight lead at the start, .017 to .025, and then held one for the win, 9.924 to 9.929. Davis was also the low qualifier in Super Gas based on his nearly-perfect 9.909 pass in round one.

The Super Street final was decided on the starting line when Larry Miner fouled by .014-second, sending Tom Brown to his first national event title. Brown never strayed far from the 10.90 index in his wins against Allan Macham, Steve Beggerly, and Larry Emil. 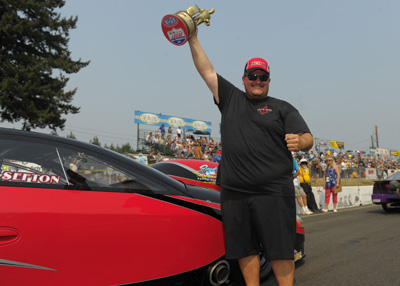 Nearly a decade after winning his first national event Wally in Super comp at the 2008 Seattle race, Don Sefton returned for an encore performance by winning in Top Sportsman presented by Racing RVs.com. Paired with Bryan Warr in the final, Sefton picked up the win with a slowing 7.239 on his 7.11 dial after Warr slowed to a 7.277 from his 7.05 prediction. Sefton’s path to the final included wins against Robert Strohm, Eddy Plaizier, and Shawn Herbst.

Yet another first-time national event champ was Andy Morris, who claimed victory in Top Dragster presented by Racing RVs.com. Morris won the final round after opponent Kyle Seipel fouled by one thousandth of a second. Earlier in the event, Morris drove his dragster to a string of solid victories against Megan Molinari, Gene Heaton, Ryan Carlson, and Jeff Havens. Morris had previously competed in just one Lucas Oil Series event this season, recording a round one loss in Mission, B.C.