Third time is the charm 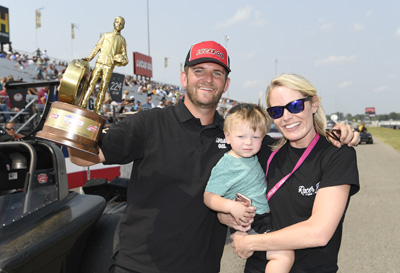 Winning any Comp race is hard. Winning Comp at Indy, the sport’s oldest and most prestigious event, is even harder. Winning Comp at Indy in a supercharged, methanol-burning low-six-second ’23-T altered? That’s nearly impossible, at least until Brad Plourd proved otherwise in the final of the 63rd annual Chevrolet Performance U.S. Nationals.

Plourd had made very few runs behind the wheel of Harry Schwartz’s wilde AA/AM roadster before arriving at Indy for the Big Go, but that didn’t stop him from turning on six win lights to claim his third Indy win and the 20th of his career.

The story of how Plourd ended up in the driver’s seat of Schwartz’s car is almost as improbable as his third Indy title.

“I got a call from Shawn Brown, the crew chief; he actually called me three times, and I didn’t answer because it was a random phone number from Calgary, Alta.,” Plourd said. “I just thought, ‘Who is this?’ I finally answered the third call, and he said, ‘Will you drive our car for Harry Schwartz?’ We tested in April in Montgomery [Ala.] and made some good runs. Bowling Green [a Division 3 NHRA Lucas Oil Drag Racing Series event] was our first race last week, and here we are.”

The thought of winning Indy in an unfamiliar race car doesn’t intimidate Plourd. He won his first U.S. Nationals crown in 2005 when he drove John Coughlin’s JEGS.com dragster to the title. Plourd had never sat in that car before the start of the event. Eight years later, Plourd borrowed a Chevy Nova from Division 1 racer D.J. Pires and earned his second title in Stock. 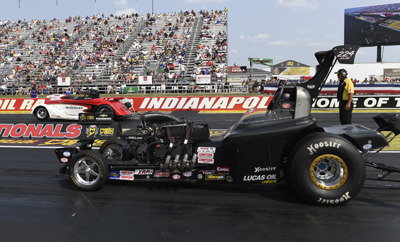 Driving a 10-second Stocker or an eight-second Super Comp dragster is one thing, but a 210-mph, short-wheelbase altered is quite another. Plourd has only limited experience in very fast cars, and he was the first to admit that he was a bit intimidated by the new ride. Those fears proved to be largely unfounded at Indy when the car went straight down the track on every qualifying and eliminations run. That includes the 6.371-second, 212.16-mph run that Plourd used to qualify No. 14 in the field. It was by far the quickest car in Comp.

“It’s an animal,” he said. “These guys do a great job of getting it down the track. I don’t want to say it’s easy, but for what it is, it’s very easy. I knew coming in here that we had a car that could win this race. We just needed to get it to go down the track every time.”

Plourd got through the first two rounds of eliminations cleanly before nicking his index slightly in a third-round win over Travis Gusso’s D/SM Cavalier. Plourd’s toughest challenge came in the quarterfinals, where he was paired with former national champion and low qualifier Frank Aragona Jr. Plourd won the bout with a very competitive (-.607) 6.413, but he also caught a break because Aragona had lost nearly two-tenths off his index due to repeated Competition Index Control violations. After a semifinal bye run, Plourd was able to sit on the starting line and watch while opponent Mike Farrell fouled by five-thousandths in the final.

“We knew it was fast enough to win, but in Comp, you have to get some breaks,” Plourd said. “This weekend wouldn’t be possible without these guys. I don’t win without a car like this. I was glad they chose me to try and wheel this beast.  We had a really good week.” 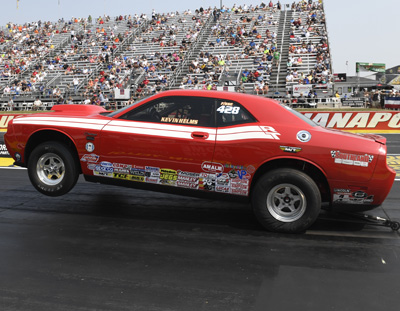 The best of the rest: Kevin Helms is already on track to win his fifth national championship in Stock, and now he may well win the Super Stock title following his third U.S. Nationals victory. Helms drove the Southland Dodge Drag Pak Challenger to a final-round win over Marion Stephenson. After a big wheelstand, Helms drove to a 9.122 on his 9.10 dial for the win. Stevenson was also .02-second off his dial with a 9.737. With the victory, Helms moved into second place in the Super Stock standings, just 23 points behind current leader Justin Lamb.

The Stock final was a class racer’s dream with Larry Gilley taking on Darrel Steiger in a heads-up, no-breakout battle of E/SA Mopars. Gilley, in his ’69 Dart, took on Steiger, in his ’70 Challenger, in Thursday’s class final, and Steiger claimed a narrow win, but Gilley returned the favor on Monday afternoon with a holeshot win, 10.622 to 10.619. Gilley was just a hundredth of a second quicker off the starting line, .022 to .032, making the final margin of victory just .007-second. Both Gilley and Steiger had their work cut out for them just to reach the final with Steiger taking out Dan Fletcher with a nearly perfect light and Gilley taking out fellow Division 7 racer Steve Wann in another close battle.

A pair of past national champions squared off to decide the Super Comp title with Ray Connolly taking a narrow win over Edmond Richardson. Both Connolly and Richardson had previously won the sport’s biggest event, but Connolly added a second title with a close 8.931 to 8.937 victory. Richardson was off the starting line first by three-thousandths, making the difference at the finish line just .003-second.

Appearing in his first national event final, Kevin Adams earned his first title in Super Gas when he stopped Samantha Coughlin in another side-by-side final round. Both Adams, and Coughlin, the wife of five-time Pro Stock champ Jeg Coughlin Jr., recorded matching 9.920 elapsed times in the final. The difference was Adams’ .006 to .029 reaction-time advantage off the starting line. A resident of Terre Haute, Ind., Adams joined J.R. Todd, Drew Skillman, and Eddie Krawiec, three Pro champs who also reside in Indiana.