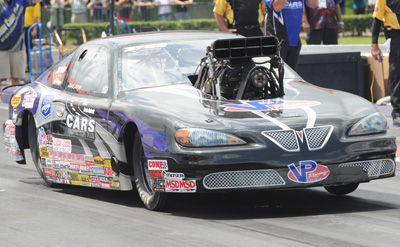 Louisiana has long been known as the “Sportsman’s Paradise” or so it says on the official state license plates, but last weekend, that unofficial title may have shifted a bit north to Bowling Green, Ky., the site of the annual JEGS NHRA SPORTSnationals at historic Beech Bend Raceway Park. Highlighted by Friday evening’s racer appreciation barbecue and after-hours fun in the track’s adjacent amusement park, the latest edition of NHRA’s Sportsman showcase was another sterling example of the sort of fellowship and camaraderie that is the foundation of Sportsman drag racing. Despite the threat of rain, the event attracted more than 400 NHRA Lucas Oil Drag Racing Series racers from all over North America.

Michael Bryant, Ricky Pennington, Jonathan Anderson, and Gary Horstmann will never forget the 2017 edition of the JEGS NHRA SPORTSnationals because all four drivers claimed their first NHRA national event titles. Bryant scored his first win in Super Stock, and Pennington took home the Wally in Stock. Anderson, the reigning NHRA Division 2 Super Street champion, left with the Super Comp trophy, and Horstmann was the winner in Super Street. All four drivers were not only first-time national event winners but also first-time finalists.

The rest of the champions were Jason Coan, who is now a five-time winner in Comp; Jason Lynch, who won his sixth national event but first in Top Sportsman; Joe Harper, who scored for the second time in Super Gas; and the veteran of the group Lynn Ellison, who celebrated his 50th birthday in style by winning the Top Dragster class, his eighth national event title.

Bryant, of New Orleans, stopped low qualifier Cody Lane in the final. Bryant drove his GT/KA Pontiac G5 to a 10.018 on his 10.01 dial to stop Lane, who was just five-thousandths behind with an 8.605 on his 8.59 dial. Gardendale, Ala.-based Penington overcame a tough loss during class eliminations to claim his first Stock title. Driving his FS/H Cobra Jet, Pennington overcame a nearly-perfect .004 light by final-round opponent Jeff Adkinson to win his first Wally via a double breakout.

Anderson has been nearly unstoppable on the divisional level in Super Street for the past two seasons, but he secured his first NHRA national event win in Super Comp when he knocked off Austin Williams, who was fresh off a victory at the Menards Heartland Nationals presented by Minties in Topeka. Anderson, of Griffin, Ga., won the final, 8.945 to 8.951. Horstmann, of Festus, Mo., won in Super Street by driving his vintage ’61 Ford Falson past Jeremy Schell in a double breakout, 10.896 to 10.876. 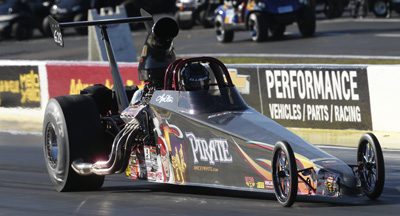 Coan qualified in the bottom half of the field in Comp but found a way to get the job done on race day when he drove his four-cylinder-powered dragster to a final-round win against Terry Smith, who fouled. Coan now has five wins: two at the Chevrolet Performance U.S. Nationals and three at JEGS SPORTSnationals races in Columbus and Bowling Green.

In 2002, Harper won the Super Gas title in Houston, and his persistence paid off more than a decade later with a second. Harper, of Florence, Miss., drove his Dodge Avenger to a nearly-perfect 9.904 to claim a narrow win over Division 3 ace Steve Hoyt’s 9.909. Lynch, who is best known as the crew chief for reigning NHRA Super Gas national champion Mia Tedesco, drove his CARS Protection Plus supercharged Pontiac Grand Am to the Top Sportsman title after a win over Mark McDonald. Lynch gave up a slight lead at the start but rallied to win with a 6.656 on his 6.65 dial while McDonald missed the mark slightly with a 6.622 on his 6.60 dial.

Kentucky native Ellison celebrated his 50th birthday by driving to his eighth national event win and third in the Top Dragster presented by Racing RVs class. Ellison, who also fields a Top Dragster for his daughter, Madison, drove his Pirate Racing dragster to a 6.310 on his 6.28 dial to stop opponent Michael Kile by just five-thousandths of a second.

News and Notes: The Grand Marshal for the event was Dallas Jones, the longtime Beech Bend Raceway track operator. Jones and his wife, Alfreda, purchased the track in 1984 and bought the adjacent amusement park three years later. Each year, the track features an ambitious schedule that includes the NHRA Hot Rod Reunion and several big E.T. bracket events.

The SPORTSnationals attracted entries from all seven of NHRA’s geographic divisions. Las Vegas resident Paul Wong represented the Pacific Division with his Stock Eliminator entry, and longtime Northwest Division racers Jeff and Cody Lane made the long tow from their home in Washington state to race their Comp and Super Stock entries, respectively. 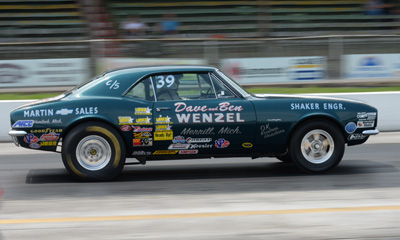 The inaugural NHRA SPORTSnationals was held at Beech Bend Raceway Park in 1974, and there is at least one car and driver combination that is still racing more than four decades later. Ben Wenzel was in action with his timeless ’67 Z28 Camaro Stocker. Not only is the car one of just 602 original Z28 models built in 1967, but it’s also the first Camaro to win a national event title at the 1967 NHRA Nationals in Indy.

The top qualifier in the Top Sportsman presented by Racing RVs.com class was Lester Johnson, who wheeled his ProCharger-equipped '55 Bel Air to an impressive 6.162, 229.78. Johnson was more than three-tenths quicker than No. 2 qualifier Keith Raftery’s 6.494. Johnson was also quicker than all but three entries in the Top Dragster category.

John Labbous Jr., the current points leader in Super Comp and Super Gas, elected to forgo both of those categories in Bowling Green. Instead, he entered the Super Street class with his Dodge pickup truck, which is a vehicle he normally uses for E.T. bracket racing. Labbous lost early in Super Street but plans to resume the points battle next week in Epping in both Super Comp and Super Gas.