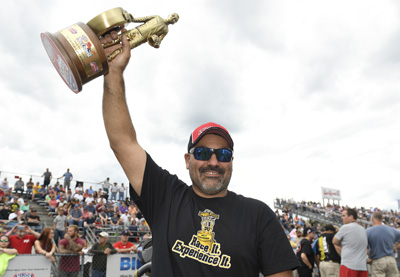 In 1987, when “Super Steve” Cohen won NHRA’s first Super Comp national championhip, he won so early and so often that he had the title sewn up by mid-July. History might well repeat itself this season thanks to the incredible win streak that John Labbous Jr. is currently enjoying in Super Gas. In eight races this year, Labbous now has four wins following his latest triumph at the NHRA New England Nationals. Labbous now has 614 points, with plenty of opportunities left to improve his score.

“This is good but I know I still have to improve in order to get the job done,” said Labbous. “That score is good, but it’s not enough to win the whole deal. When I left home to come here and to Englishtown next week, I said that if I could come home with 640 points, I’d feel good about it. That won’t guarantee the championship, but it’s a number that I’d be comfortable with. I’ve got a few third round [finishes] to improve on so I’ve got work to do but this is a great start.”

Labbous, who entered the Epping event leading in both Super Comp and Super Gas, made the long trip from Tennesse to Epping at the request of car owner Anthony Bertozzi, who doubled-up at the inaugural NHRA New England Nationals in 2013. Labbous had never raced at New England Dragway, a move that he said worked in his favor. In the final, Labbous stopped New York-based Chuck Rothermel on a holeshot, 9.922 to 9.914. It was the seventh time that Rothermel has been a runner-up at an NHRA national event. 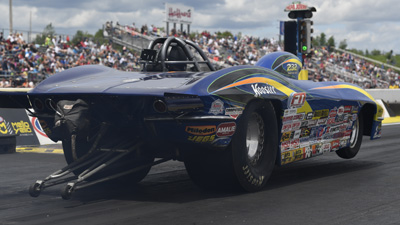 “I tend to do better at places that are new and unfamiliar because I know I have to pay close attention to all the details,” Labbous said. “Before the final, I was looking at the flags and the one on the starting line was still and the one down track on the top of the hill was whipping around. I had to go with my instinct and it worked. I really enjoyed racing here. The weather was great and the track was just about perfect.”

Labbous still doesn’t know if he can win the national championship but at this point, he’s committed to the battle and will travel as far as necessary in order to maximixe his chances.

“I will most likely be out of national events to claim this summer,” he said. “I’m going to Englishtown next week and then we’ll see. I’ve got a plan. If I have to go out west this winter to Las Vegas and Pomona in order to block, I’ll do that.” 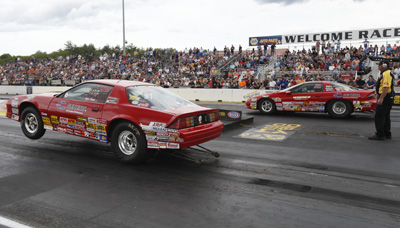 The best of the rest: For the second time, twin brothers Byron and Bryan Worner raced in a Super Stock final and for the second time, Byron emerged as the champion. Byron, the 2013 NHRA Super Stock champ, repeated his performance from last year’s Reading race when he defeated his brother for the Wally. It was Byron’s fifth national event title in six career finals.

“It’s a great feeling to know that the hardware and money is all going home with us,” said Worner. “When we pull in to the parking lot, we try to qualify on opposite sides of the ladder so we can race in the final. This is the second time it’s worked at a national event and it was the same result as the last time. When this happens, the semifinal becomes the pressure round.

Stock winner David Ficacci earned his third national event title and first since the 2010 JEGS SPORTSnationals in Columbus when he defeated Thomas Auger in a final round that featured two vintage early muscle cars. Ficacci was able to coast to the win in his ’69 Camaro after Auger fouled in his ’63 Dodge Polara.

“This means a lot because I’ve struggled the last few years,” said Ficacci. “Doubt starts to creep in so to win a race really feels good. At this race, the Tree was tight and everyone was killing it. The competition is always tough but this race was especially tough.”

Rich Dorr joined the list of first time winners when he drove his Undercover chassis dragster to the Super Comp title over Ray Fredricks. Dorr, a regular at New England Dragway, got the best of the double breakout battle, 8.892 to 8.871. Door also defeated Jason Kenny on his way to the title.

“This feels great,” Dorr said. “It took a while but I hope there is more to come. This couldn’t happen at a better place. It’s great racing here. The second round [against Kenny] was probably my toughest round.”

After watching his father, Ray, and brother, Mike, won multiple times in Super Gas, Brian Sawyer joined the crowd with his first national event title in the Super Street class. Sawyer, driving the same Camaro that Mike drove to a runner-up finish at the inaugural New England Nationals, grabbed a big lead against Karri Khory in the final round and won on a holeshot, 10.982 to 10.921.

“I took a few years off and this is my first race back,” Sawyer said. “It feels wonderful to get the win. We’ve run this car here since 1984. My dad and brother have both driven it and they’ve done very well. It was nice to join them.” 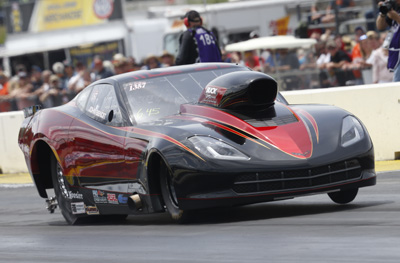 On Saturday, John Benoit was honored when his Corvette was honored with the Mothers Best Appearing Car award in Epping. A day later, he collected another honor by winning the Top Sportsman presented by Racing RVs.com class. Benoit was sharp in the final with a 6.444 on his 6.43 dial to edge defending event winner Matt Harper, who was just a thousandth of a second behind at the finish line stripe with a 7.441 on his 7.43 dial.

“This is unbelievable; for 20 years I’ve dreamed about a week like this,” Benoit said. “This is my home track and I love it here. This has been a special weekend.
Every single round is tough; they are all great drivers. The final was very close and it could have gone either way.”

The Top Sportsman presented by Racing RVs.com class produced NHRA’s latest female winner when Deborah DiGenova tuned on the win light in the final against low qualifier Scott Hall. DiGenova put together a three-hundredths package in the final round with a .014 light and a 6.826 on her 6.81 dial for the win while Hall broke out by nine-thousandths.  supercharged small block dragster, a car formerly campaigned by his father, Dale, a Division 1 Hall of Famer. Like several other Epping winners, DiGenova is a New England Dragway regular, along with her husband, Val.

“I’m just a bracket racer; I run here every week,” DiGenova said. “This is a dream come true. This is insane. Hopefully, it won’t be the last one.”