A pair of near misses 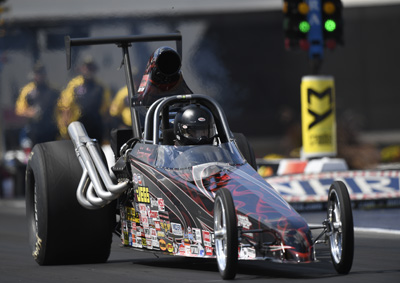 I spend a fair amount of time in this column discussing and dissecting doubles since it seems like someone in the NHRA Lucas Oil Drag Racing Series wins two classes, or at least comes very close to it, at almost every event. The reality is that a national event double is still a rare commodity. In more than 60 years, the feat has only been achieved 38 times by 24 different drivers. At last weekend’s NHRA Carolina Nationals, two drivers nearly doubled, but in the end, each of them had to settle for a split.

Not surprisingly, John Labbous Jr., was one of the drivers in line for a double after driving to the final rounds in both Super Comp and Super Gas. That is an impressive feat in itself, but it becomes even more remarkable when one remembers that Labbous scored his first career double at zMax Dragway in April, when he won in both Super Comp and Super Gas. Five months later, Labbous hasn’t lost a bit of momentum. He once again drove to the final in Super Comp and Super Gas. He won the Super Comp title easily when Amanda Boicesco encountered some sort of an issue, possibly a malfunctioning throttle stop, and ran 7.97, nearly a second under the index. Labbous then raced Dean Mathauser for the Super Gas title and suffered his first loss in a close 9.882 to 9.895 double breakout. All told, Labbous compiled an amazing 23-1 record in elimination rounds at zMax Dragway during the 2017 season, but it’s the one loss that he’ll remember most.

“I don’t want to be the guy who complains after winning a race; that’s not my style, but I’d like to have that one [Super Gas final] back,” Labbous said. “I knew that it was faster out and I knew that I was probably not going to take the finish line and be safe, but I did it anyway. Losing a race is one thing, but losing when you have a plan and don’t execute it; that’s what bothers me the most. Credit to [Mathauser], he did a nice job, but that was a winnable round.

“This also didn’t do much to help my final-round record,” said Labbous, who is now 6-8 in national event finals. “I was hoping to get that to at least the .500 mark, but that will have to wait now. I don’t want to be the guy who gets to the final and can’t get the job done.” 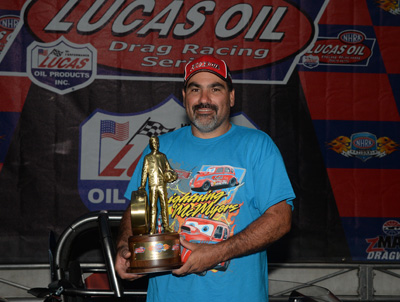 Labbous has had a monster season that now includes nine wins and three runner-up finishes spread across both classes. Although the zMax event did not count for points, Labbous remains the national points leader in Super Comp and Super Gas, although he’s far from guaranteed to win either of them. In Super Comp, four-time champion Gary Stinnett is just 15 points back, but Stinnett can only claim points at one more national event. In order to overtake Labbous, he must reach the final round. Austin Williams is also in the mix with several events left to claim.

Division 6 racer Chris Cannon has won four Lucas Oil Series events this season and is in a position to challenge Labbous for the Super Gas title. Having attended just two national events, Cannon has four more shots to improve his score. He’s likely to attend the last three races in Dallas, Las Vegas, and Pomona.

“We’ll see,” he said cautiously. “I’m done earning points, so all I can do now is block. If I’m still in the running for this, I’ll go out west. It’s great to be the leader, but I’m not about to get too excited about it. I might not win either of them.” 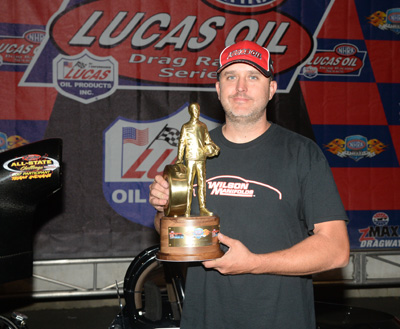 While Labbous was busy nearly running the table in the Super classes, Todd “Bones” Ewing was doing the same in Top Dragster and Top Sportsman. Ewing entered the Charlotte race with six national event wins, five in Super Comp and another in Super Stock. He drove his six-second Camaro to the Top Sportsman final, where he broke out by a thousandth of a second against past Division 3 champ Jerry Albert. For his part, Albert did a great job with a .024 light and a perfect 6.890 on his 6.89 dial.

Ewing later won the Top Dragster title when he beat Barry Brown in the final. After a perfect .000 light in the semifinals, Ewing, who was driving a dragster owned by Top Fuel champ Shawn Langdon, used a .008 to stop Brown. After numerous delays, the Top Dragster and Top Sportsman finals were the last two runs of the day.

“I was a little mad after I lost the Top Sportsman final,” Ewing said. “I knew it was quicker out there and I didn’t kill enough. He ran right on the dial but I still had a hundredth of a second to work with. I took eleven [thousandths] down there and I needed to take ten or less. I’m just glad I got it done in the dragster."

The best of the rest: The battle for the 2017 Lucas Oil Comp championship figures to be a two-horse race between former champions David Rampy and Frank Aragona Jr. and they met in the zMax final. Aragona managed to hold on for his fifth win of the season after driving his E/DA to a (-.532) 7.388 to beat Rampy’s slowing (-.376) 7.354. Despite the loss, Rampy remains the points leader, although Aragona has closed to within 12 points with a national and a divisional event left to claim. Rampy, who already has five wins on the season in Comp, has two divisional races left to improve his score. 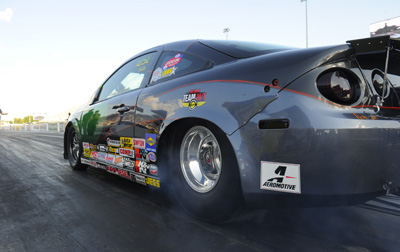 First-time finalist Nick Chiles accomplished a previously unheard-of feat when he handed former world champ Byron Worner his first loss in a Super Stock final. Worner, previously 5-0 with the money on the line, lost the double-breakout battle when he ran .012-second under his dial. Chiles was just .008 under his dial behind the wheel of his SS/BS Cobalt. In the semifinal round, Chiles was perfect on the starting line with a .000 light in his heads-up SS/BS battle against John DiBartolomeo’s Camaro. Chiles had a second .000 light in his third-round win over Epping champ Marty Rinehart.

There was also a first-time winner in Stock after Kenneth Stott drove past Mickey Whaley in an all-Camaro final. Stott grabbed a three-hundredths advantage at the start and held on to win with an 11.673 on his 11.66 dial. Whaley, seeking his sixth national event title, broke out by two-thousandths with a 10.688. Stott had a tough draw in the semifinals when he raced against reigning national champ Jeff Strickland while Whaley also had his work cut out for him against four-time national event champ Adam Davis.