Beyond the event winners, there were a handful of Sportsman racers who also made their mark on the Amalie Motor Oil NHRA Gatornationals.
29 Mar 2017
Kevin McKenna, National Dragster Senior Editor
The Sports Report

There is a strong likelihood that the recent Amalie Motor Oil NHRA Gatornationals will be remembered as one of the best races of the 2017 season and for Sportsman racers Lester Johnson, Roy Hill, and Carl Tasca, it was certainly a memorable race. Taking advantage of some of the best conditions in recent memory, all three drivers were able to make the quickest and/or fastest runs of their careers. 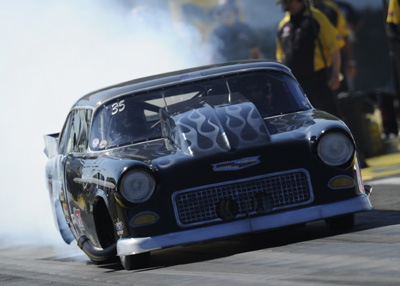 In the Top Dragster class, a number of competitors regularly flirt with the five-second zone even though any qualifying run quicker than 6.00-seconds is disallowed and there can be no race-day dial-in quicker than 6.00. Such is not the case in Top Sportsman, where it takes a lot more horsepower and savvy tuning to make a heavier, full-bodied car run in the fives.

Lester Johnson raised a few eyebrows when he unloaded a 5.949, 244.16 mph during Thursday’s opening round of Top Sportsman qualifying in Gainesville. Johnson has always had one of the quicker Top Sportsman entries, but he had typically been running in the 6.2-zone and had never run quicker than 6.14 before the Gatornationals. Johnson’s Excalibur ’55 Chevy is powered by a 521-cid Hemi engine from Brad Anderson Enterprises, and it’s equipped with a ProCharger centrifugal supercharger, a combination that is favored by many Top Dragster racers.

“It might be hard for some folks to believe, but the only difference in the car from last year is that we changed torque converters,” said Johnson. “We have a new short-block in the car, but it’s identical to what we ran last year. We went to a test session a few weeks back, and I talked with Greg Samuels from FTI converters. We went down and went over some data, and he said, ‘I’ve got something I want you to try.’ On the first two passes, it made so much bottom-end power, I had to take timing out just to get from point A to B. We ended up making our best eighth-mile pass with the car.

“When we got to Gainesville, I honestly thought I’d run 6.01 or 6.02, but since the test runs were eighth-mile passes, I didn’t know what kind of mph we’d run. I was really surprised to see that we ran 244. That was quite a bit more than I expected. It was a pleasant surprise to say the least. If I’d have had a killer tune-up in it I think we could have run 5.84 and maybe run 250 mph. I had a couple of Pro Mod guys come over, and they couldn’t believe how much timing we had out of the car and how much I was short-shifting it.” 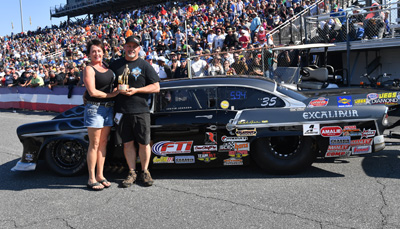 Johnson isn’t the type of racer who simply likes to go fast; he also wants to win rounds. He was the Top Sportsman winner at the 2015 St. Louis event, and he has finished in the top five in the very competitive North Central Division standings for the last two years. Johnson took more power out of his potent ’55 for the second qualifying session and even lifted before the finish line and still ran a 6.012 to claim the No. 1 qualifying spot, nearly four-tenths ahead of eventual race winner Jeffrey Barker. Johnson dialed a 6.01 for his round-one battle against Ronnie Proctor’s Mustang and ran a 6.042 but came up short by just five-thousandths at the finish line.

“On the run where I lost, I was coasting 5.7-seconds into the run and lost the stripe by five-thousandths,” Johnson said. “It was kind of a shot in the dark. Now that I know what to do, I can still bracket race this car. The good part about it is that it’s so fast that I can take timing out, and my 60-foot times are slower than a lot of the guys running 6.7s. I don’t have to hit the tires so hard, so this car will go down the track as long as you get through the first 120 feet. We also built this car to be stable. It has that big flat trunk and side plates to keep it stable. The faster it goes, the more it stays straight. It almost drives itself.

Although Johnson didn’t win the Gatornationals Top Sportsman title, he did leave Gainesville Raceway with some hardware in the form of the Edelbrock Never Rest Performer of the Race award.

“Winning that award made me feel good,” he said. “We do this for fun; it’s never about the money. And I’m not out here trying to outrun anybody. I have my own goals, and whenever I leave the track, I’m happy because we got to race. I do think it’s cool that we have the world’s fastest ’55 Chevy, and I don’t think anyone in Top Sportsman or Top Dragster has been 244 mph. It’s not an official record, but we’ll take it.” 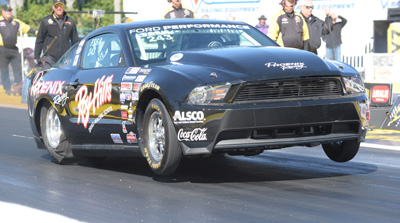 From Pro Stock racer to driving school instructor, Roy Hill has made his mark on the sport in many ways, and now he has another title he can add to his résumé: NHRA’s quickest Super Stock driver. During Thursday’s opening qualifying run in Gainesville, Hill, as feisty as ever at age 71, wheeled his FSS/A Cobra Jet Mustang to a 7.784 to not only join the exclusive seven-second fraternity, but he also made the quickest run in the long history of the Super Stock class by nearly a tenth of a second. Unfortunately, for Hill, he never got a chance to improve his performance because he broke and was unable to show for the first round of eliminations.

For the record, the other drivers who have earned seven-second time slips in Super Stock trim include John Gallina, Carey Bales, John Clegg, P.B. Candies, Stephen Bell, Ray Skillman, and Scott Gove. Ironically, Bell had his COPO Camaro entered in FSS/B in Gainesville and nearly made that class’ first seven-second run with an 8.009 to lead all qualifiers. 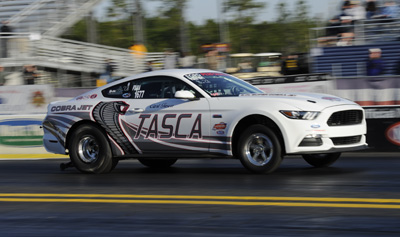 When Carl Tasca’s scoreboard lit up with a 170.28 speed during the opening round of qualifying in Stock Eliminator, many people, including myself, believed they had just witnessed the sport’s first 170-mph Stock Eliminator run. Apparently, many of us have short memories, forgetting that just last November Stephen Bell recorded a 171-mph speed during the Division 4 National Open event at No Problem Raceway Park in Belle Rose, La. Bell was one of several Factory Stock drivers at that event attempting to make the first seven-second Stock pass. He wasn’t able to accomplish that mission but did leave with a 170-mph time slip with his bright red COPO Camaro.

While Bell may have been the first driver over 170, it makes Tasca’s run no less impressive. The uncle of nitro Funny Car driver, Bob Tasca III, Carl has been racing supercharged Cobra Jets for several years, but he only recently began running NHRA events. Tasca also had a solid outing in final eliminations, making it to the third round before losing to 99-time national event winner Dan Fletcher, who received a nearly four-second head start in his 12-second station wagon. In eliminations, Tasca also recorded speeds of 168.85 and 168.70.