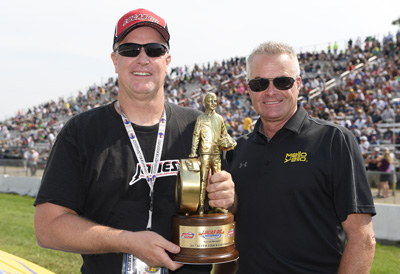 Every kid who has ever played Little League Baseball has dreamed of one day playing in the Major Leagues, but the reality is that few ever make it that far. Eric Bell is one exception. A native of Modesto, Calif., Bell was drafted in 1982 and enjoyed a solid career as a left-handed pitcher with stops in Baltimore, Cleveland, and Houston between 1985-1993. Today, Bell operates a professional baseball school and Bell Sports Gear, in Chandler, Ariz. He also races in NHRA Super Stock competition with a wheelstanding GT/EA ’68 Barracuda.

The same drive and discipline that helped Bell overcome long odds to reach the big leagues has helped him become a competitive Super Stock racer. Bell scored his first win in 2010 at the Pacific Division Lucas Oil Series event in Las Vegas. A week after reaching the semifinals of the national event, he closed the deal with a final-round win over national champion Ryan McClanahan. More recently, Bell was a runner-up at the Division 7 event in Sonoma last season, and he drove to another runner-up finish at the Division 5 event in Brainerd, a week before the Lucas Oil NHRA Nationals. Riding a recent hot streak, Bell collected his first national event title at the Lucas Oil NHRA Nationals after Canadian Darrell Dietz red-lighted in the final round.

Following his Brainerd win, Bell, who once took a no-hitter into the ninth inning, wasn’t hesitant to compare his career as an MLB player with his pursuit of an NHRA Wally trophy. 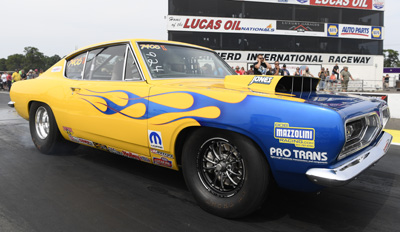 “I was thinking about this earlier and [winning a national event] is harder than winning a major league baseball game,” said Bell. “Once you get there [to the big leagues] you expect to win games. If you enter a race, you have a chance, but this is definitely tougher to do. I just haven’t done it as much as I’d like to.”

Bell won five rounds to reach the final of the Lucas Oil Series event before losing to Brett Speer when he missed the Tree. At the national event, he qualified No. 1 and then went the distance. All told, Bell compiled an 11-1 record in elimination rounds during the two events.

“Eric Jones in California builds my engines, and he’s out of this world,” said Bell. “It was nice qualifying No. 1 and having a bye run. I had a couple of rounds where my lights weren’t that great but they came around in the late rounds, and I was able to get it done.”

The best of the rest: Ben Line became the third member of the Line family to win an NHRA national event title, joining his older brothers, three-time Pro Stock champion Jason and Lance, after claiming the Brainerd Stock title. Line opened eliminations with a win against his brother-in-law, Johnny Diekema, and also topped national event winners Trista Fenner, Brett Speer, and Cal Method to reach the final. Paired with two-time Brainerd winner and defending event champ Bill Feist in an all-Mustang final round, Line was almost perfect with a .005 reaction time and a 10.533 on his 10.52 dial-in. Feist had won 13-straight rounds in Brainerd before losing the close final to Line.

The Super Comp final featured a pair of very accomplished racers; Trevor Larson and Jeremy Demers. Larson, a past Division 5 champ and the only driver to double-up at the JEGS Allstars race, won the close double-breakout final with an 8.891 to Demers’ 8.886. Larson was also quicker off the starting line by three-hundredths. Larson’s path to the final included a near-perfect run against defending national champion Nick Folk and an equally competitive holeshot win over four-time national champ Gary Stinnett in the semifinals. For Larson, the win was his sixth in NHRA competition. 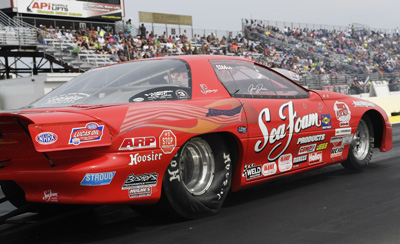 There were a number of first-time winners in Brainerd, including Super Gas champ Jim Davis, who wheeled his Sea Foam ’92 Camaro to a win over Ken Griffiths in an all-Minnesota final round. Davis gave up a slim lead at the start but prevailed in a close 9.917 to 9.995 decision. Davis topped Super Stock racer Tim Nicholson in the semifinals and also defeated Chad Covert and Matthew Larson in eliminations. Also of note was the ultra-rare perfect run (.000 light and 9.900 E.T.) that Robert Rowan put down in his opening-round win over Brianna Rachac in round two.

Bob Fischer collected his first title in the Top Dragster presented by Racing RVs.com class after stopping Michael Kritzky in the final. The Top Dragster class typically offers some of the best racing in the NHRA Lucas Oil Drag Racing Series and this was no exception. Fischer won with a 7.403 on his 7.37 dial, holding off Kritzky’s 6.411 (6.38 dial) by just nine-thousandths. Fischer’s best performance came in the semifinals where he ran a 7.381 on his 7.38 dial to stop 2015 JEGS Cajun SPORTSnationals winner Joe Hessling.

Yet another first-time winner was Top Sportsman presented by Racing RVs.com champ Brian Heath. Making the trip to Brainerd from his home in Texas, Heath worked his way to the final with wins over Doug Woody, low qualifier Paul Pittman, and Larry Demers. In the final round, Heath got off the starting line first with a .004 light and then drove his Camaro to a 7.152 on his 7.13 dial for the win against Joseph Mohana, who slowed to a 6.841 from his 6.77 dial. Earlier this season, Heath opened his season with a victory at the Division 4 Lucas Oil Drag Racing Series event at Royal Purple Raceway near Houston.