The Indy Before Indy 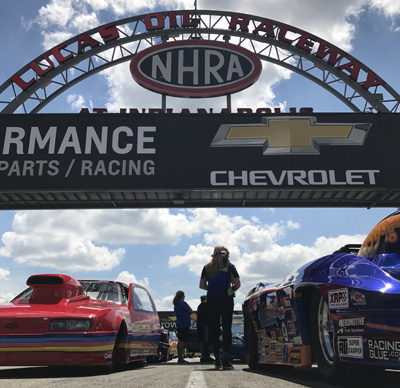 The Chevrolet Performance U.S. Nationals doesn’t start for two more weeks yet there were officially 634 racers on the grounds of Lucas Oil Raceway at Indianapolis last weekend. The large gathering of Sportsman racers was made possible when the North Central Division decided to add a second mid-summer NHRA Lucas Oil Drag Racing Series event at the historic facility. The track has long been the host of the first North Central Division race in May, and when that event was postponed by rain, the August race became a doubleheader. Jeff Conley, the new Division 3 director, dubbed the event a great success.

“This event far exceeded even our highest expectations,” said Conley. “Given the location and the date, I was expecting somewhere in the neighborhood of 500 cars. The record for any Division 3 Lucas Oil Series race is 669 cars and to think that we almost topped that in the middle of the summer is amazing.

“I’m new to this job and so is much of my staff, but I hope we showed the racers that we have the ability to get the job done. We had a minimal amount of delays, and we were able to run the final pair at 6:30 p.m. on Sunday night. I appreciate all the hard work that the Division 3 team put into this event, and I also appreciate the cooperation of the racers, who helped everything go so smoothly.”

On track, the racing at Indy was second to none. Aided by a cool front that produced dry weather and high temperatures in the 70s, the Spitzer Race Cars Top Dragster and Top Sportsman classes each produced a record bump spot. All 32 Top Dragster qualifiers clocked in at 6.42-seconds or quicker while the Top Sportsman field was also an all-six second affair with a 6.87 bump. Not surprisingly, the Top Dragster title went to second-generation racer Marty Cheeseman, who was dialed 6.00 (the quickest E.T. allowable) for his final-round battle against championship leader Lynn Ellison.

Not to be outdone, Alex Bosak drove to his first win in the Top Sportsman class after final-round opponent Scott Krueger ran into a mechanical issue and fouled. For Bosak, like everyone else in the class, it was an honor just to be a part of the record 32-car field. Bosak ran a very competitive 6.781, 205.07 during qualifying with his Dodge Neon and was No. 21. All but three drivers in the Top Sportsman field topped 200-mph and there were five drivers who ran in the sixes and didn’t make the field, including current championship contender Belva “Badeye” Brinegar and former Division champ and JEGS Allstars champ Jerry Albert. 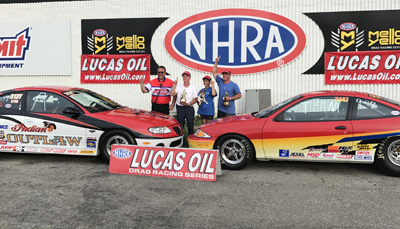 For fans of NHRA class racing, the Indy event was one not to be missed. The Super Stock and Stock classes were filled with quality entries from across the North Central Division. The final car counts were impressive with 92 Super Stock entries and a whopping 122 Stockers. Overcoming staggering odds, the Kentucky-based Morris family ran the table with Matt Morris claiming the win in Super Stock on the strength of a nearly perfect .003 light against Chad Taylor while his son T.C. drove his E/SA entry to a narrow win over Matt Antrobius to complete a perfect 14-0 run for the duo.

The other noteworthy star of the event was Joey Fuestang, the Super Comp champ. A week ago, Feustang won seven rounds to earn the title at the National Trail Raceway event. He doubled that total with another impressive seven-round win total in Indy. In the final, Feustang defeated James Hinkle to win his fourth career Lucas Oil Series title, and second this season. Following his back-to-back wins, Feustang is prepared to mount a serious challenge for the Division championship. He’s currently ranked second to Jacob Elrod, with two races in hand. 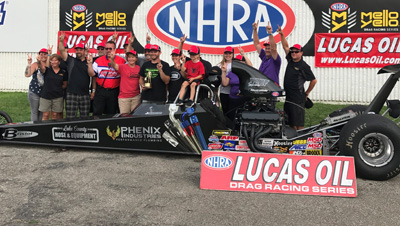 Another driver who nearly duplicated Feustang’s success was Super Street winner Phil Smida. The winner of the 2013 Chevrolet Performance U.S. Nationals, Smida was a runner-up in Columbus. Following his back-to-back final rounds, he’s just 20 points out of the lead and has a race in hand versus current leader Mark Smith.

The Indy Lucas Oil Series doubleheader was scheduled during a very busy time in the North Central division. A week ago, the series made a stop at the newly renovated National Trail Raceway in Columbus, an event that attracted more than 450 racers. After a week off, the D3 crew will head south to historic Beech Bend Raceway Park in Bowling Green, Ky., for another well-attended event that annually attracts north of 500 racers. After the Bowling Green race, a steady parade of haulers, trucks, and race cars will make the four-hour trip back to Indy to begin stacking for the Chevrolet Performance U.S. Nationals.

Events like the Indy Lucas Oil Series event help to illustrate the popularity of NHRA Sportsman racing. In addition to the 634 entries at Lucas Oil Raceway at Indianapolis, there were approximately 400 more die-hard Sportsman racers in action 700 miles to the west at the West Central Division event in Brainerd.

“Things are good right now,” Conley acknowledged. “Sportsman racing is healthy, particularly in our division, and we keep looking for ways to make it better. I have toyed with the idea of scheduling a double-header weekend at Indy sometime, but I’m afraid we might get 1,000 cars.”