The hottest driver in drag racing 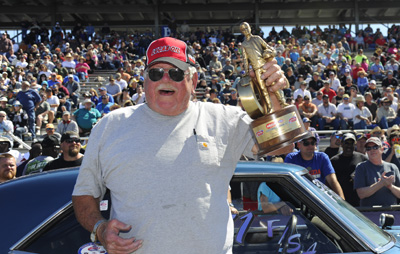 Last weekend at the Amalie Motor Oil NHRA Gatornationals, nitro racers Leah Pritchett and Matt Hagan had their two-race winning streaks snapped in Top Fuel and Funny Car, respectively. There is one other driver who suffered no such loss of momentum in Gainesville and his name is Terry Nagel.

A longtime Division 3 Stock racer, Nagel has been on a tear that most racers can only dream about. Nagel’s adventure started last October at the North Central Division National Open event at Lucas Oil Raceway at Indianapolis where he won the Stock title in his trusty F/SA ’68 Camaro. After a short winter break, Nagel was eager to hit the road again, so he ventured south to Florida for the season-opening Southeast Division NHRA Lucas Oil Drag Racing Series race at Orlando Speed World Dragway, where he was rewarded with another victory. Nagel stumbled a bit when he lost in the first round of the Gainesville Raceway Lucas Oil Series event, but he quickly recovered a week later to win his first national event title. All told, Nagel has won 20 of his last 21 rounds of competition.

“I’m very excited and happy,” Nagel said. “I’ve been doing this a long time, and I don’t know that I can tell you what this feels like right now. I do have to thank my wife, Linda. We’ve been married for 53 years, and she’s always stuck with me.”

Nagel, who will be 75 years old in May, woke up Monday morning after Gainesville to find his name at the top of the Stock points standings, ahead of more well-known racers, including Dan Fletcher, Jerry Emmons, Justin Lamb, and Kyle Rizzoli. 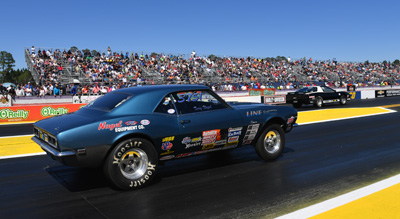 The hot start to 2017 is a far cry from last season, where Nagel competed in 10 national and divisional events but only made it past the second round once. His best showing, outside of the Indy National Open victory, was a third-round finish at the fall Charlotte event. Even Nagel is at a loss to explain why or how his fortunes have turned around so quickly, but he’s not about to question his success.

“We came down here and won the Orlando points meet, and I thought that was amazing,” Nagel said. “Now this [Gainesville win] is overwhelming. I have to thank a lot of people including Lance, Jason, Ben, and Lawrence Line, Dan Dobson, Jim Marshall, and Jimmy Roberts, and of course, my family."

The best of the rest: A public service announcement to future Gatornationals competitors: It might be wise to compete in the Lucas Oil Series event held a week earlier at Gainesville Raceway. David Rampy and Jeffrey Barker swept both events in Comp and Top Sportsman, respectively, and Michael Volkman backed up his win at the points meet with a runner-up finish in Super Stock. 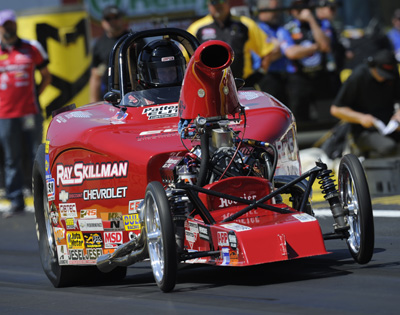 For Rampy, the victory marked win No. 93 in his storied career. Driving his Skillman Automotive-backed A/EA Bantam roadster, Rampy qualified No. 7 but worked his way to the semifinals without incurring a large Competition Index Control penalty. Rampy lost a tenth of a second in index during his semifinal win over Jenny Treadwell, but he was still able to pull out a win in the final round after Wes Leopold fouled in his A/SMA Dodge Stratus. Rampy doesn’t often pursue the Lucas Oil Comp title, but after starting the season with back-to-back wins, he may opt for a different strategy this time around.

After winning the inaugural national title in the Top Sportsman presented by Racing RVs class in 2015, Barker is eager to prove that his 2016 struggles were an anomaly. So far, he has done just that with a pair of wins to open the season. With elapsed times in the 6.5s at more than 208 mph, Barker is essentially bracket racing a Pro Stock car but he has a solid game plan and rarely makes mistakes. After qualifying No. 2 in the quick field, Barker earned a bye into the final round following his quarterfinal victory over Jason Lynch. After giving up a hundredth of a second at the start, Barker won the final round in a double breakout against Casey Spradlin’s unique ’37 Chevy.

In Super Stock, Volkman managed to win 11-straight rounds in Gainesville aboard his GT/LA Chrysler Sebring before a red-light start ended the streak in the final round. Volkman’s foul allowed Fred Allen to claim his first national event title behind the wheel of his SS/TB Chevy S-10 truck. Allen had been a three-time runner-up in Comp, including last year’s St. Louis event. Allen kicked off eliminations with a nearly perfect .001 reaction time against Gary Ewing and also avoided disaster when Dan Zrust broke out by a thousandth of a second after gaining a six-hundredths advantage at the start. 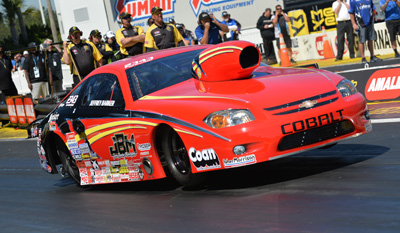 The Gainesville Super Comp field was loaded with talent, and the final round reflected the quality of the competition with 2015 Lucas Oil Super Gas champ Jacob Elrod taking on former Million Dollar Drag Race champion Troy Williams Jr. In one of the closest final rounds in this or any other season, Elrod prevailed 8.917 to 8.931 with a margin of victory at the finish line of just .0006-second. For Elrod, the win marked his third national event title and second in Super Comp. It also helped take the sting out of a disappointing round-two loss a week earlier.

Two-time national champion Sherman Adcock Jr. has appeared in more than 20 national event finals during his great career, but few were as meaningful as the Gatornationals, where he took on his longtime friend and fellow NHRA champion, David Tatum III. Adcock, in his Peak-backed Corvette, grabbed a small lead at the start, and it was enough for the win with a 9.908 that held off Tatum’s perfect 9.900 pass. For Tatum, who has six national event titles to his credit, just making it to the final was rewarding because he has spent the last couple of years rebuilding his race team after his Chevy Nova Super Gasser was stolen.