Want to know what’s going on in NHRA Sportsman racing in 2017? Here are a few things to look out for as the new season kicks off
01 Feb 2017
Kevin McKenna, NHRA National Dragster Senior Editor
The Sports Report

Technically, the 2017 season kicked off last weekend with the Pacific Division National Open event at Auto Club Dragway in Fontana, Calif., and we’re less than two weeks from the first national event of the season, the Circle K NHRA Winternationals in Pomona. Between national and divisional events and the JEGS SPORTSnationals, there are 70 opportunities for racers to earn points towards championships and give the parity that exists in the NHRA Lucas Oil Drag Racing Series, but it’s a good bet that at least a few of those titles won’t be decided until Nov. 12, the final day of the Auto Club NHRA Finals, and the last regularly scheduled day of Pro and Sportsman competition. 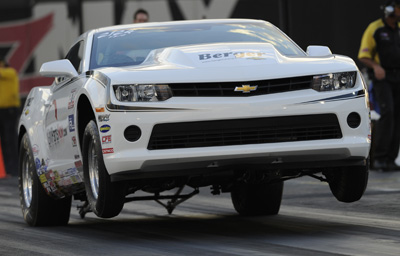 Will any of the 2016 champions repeat?
Conventional wisdom says, if you can accomplish something once, you can repeat it, and that should certainly apply to each of the 2016 NHRA Lucas Oil Drag Racing Series national champions. That being said, defending a title is often harder than winning one.

While repeat championships are quite common in the alcohol classes, they are quite a bit more infrequent in other Sportsman classes. The last Comp driver to go back to back was Dean Carter in 2003-04. Before that, only Coleman Roddy (1983-84) had accomplished the feat. In Super Stock, none of Jimmy DeFrank’s five titles have come in consecutive years, and the only drivers to have done it are Greg Stanfield, who won three straight, and four in a five year span between 1990-94. Keith Lynch was also honored as a back-to-back champion in 1982-83.

In Stock, Kevin Helms three-straight titles in 2001-03 sets the gold standard although Brad Burton’s two titles came in a three-year span. It’s worth noting that Burton finished a close second to Jeff Strickland last season, which may help set up another title run this season.

If one of the 2016 champs does repeat, history might favor Super Comp champ Nick Folk. Fellow Super Compers Scotty Richardson, Shawn Langdon, and Gary Stinnett have all won back-to-back titles since the class was officially recognized as a championship eliminator in 1987. By comparison, no Super Gas driver has ever successfully defended a title, although, Sheldon Gecker and Sherman Adcock Jr. are both two-time champions. Mia Tedesco already made history as the first female Super Gas champion, so it wouldn’t be at all surprising if she were to enter more uncharted territory as the class first back-to-back champ. 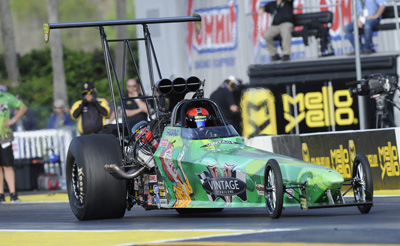 How much quicker will the Top Dragster class get?
During last year’s preseason preview, at least one Top Dragster competitor noted that he expected the class to “eventually turn into a 6.0-second bracket race.” While the Top Dragster presented by Racing RV’s class hasn’t progressed quite that far, there is a good chance that prediction will come at least partially true.

Last season, the Top Dragster class was contested at 17 national events, including the JEGS SPORTSnationals in Bowling Green, Ky., and more often than not, it took a run in the 6.0-second zone to claim the top spot. Most competitive entries ran in the 6.3 to 6.4 range, and in almost every case, it took a run deep into the sixes just to make the field. As one other driver put it, “the days of taking the throttle stop off your Super Comp car and racing in Top Dragster are long gone.”

On the divisional level, the Top Dragster class is even more brutal. Without the car-count restrictions that often hold national event performances in check, some of the NHRA Lucas Oil Drag Racing Series divisional fields are brutally quick. That’s especially true in the North Central and South Central Divisions where bump spots in the 6.4s are to be expected at most events.

Reigning Top Dragster national champion Jeff Strickland runs 6.4s in his Top Dragster using a ProCharger centrifugal supercharger and what he calls a mild tune-up. Other Top Dragster racers achieve similar performances using nitrous oxide, a conventional roots-type supercharger or a turbocharger. Many current Top Dragster drivers previously raced in Super Comp, and after years of running consistent 8.90s, they’re happy to be back in a class that is at least semi-performance based.

The only reason that Top Dragsters don’t regularly run in the five-second zone is because the current rules don’t allow it. With that in mind and based on the recent history of the class, expect to see more Top Dragster entries in the 6.0-6.3 range this season. 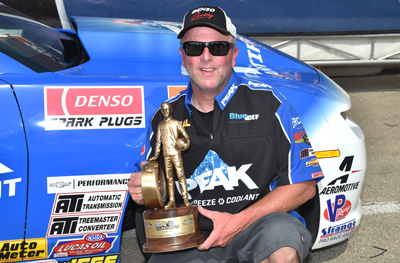 Will Dan Fletcher get to 100 wins?
If there is one prediction here that is almost a mortal lock, this is it. Given the fact that Sportsman racing legend Dan Fletcher needs just one win to join the exclusive 100 win club, he will almost certainly get there this season. In fact, a better question might be, “Does Dan Fletcher get his 100th win before Gainesville?” event then, the answer might be a resounding yes since he has had great success in Pomona and Phoenix, the first two stops on the 2017 NHRA Mello Yello Drag Racing series tour.

Fletcher’s career is defined not only by his gaudy win total but also by a lengthy run of consistency. He has won at least one national event title every year since 1994, and he seems to get better with age. In the last five seasons, Fletcher has boosted his win total by 25 victories, including four last season and three in 2015.

Last season, Fletcher also scored his first wins in Super Comp and Super Street, so he has now got national event victories in six different classes. He has often joked about racing in Top Sportsman or Top Dragster in order to collect a seventh different class win, and it wouldn’t be at all surprising to see him in either class this season.

Fletcher maintains that his days as a touring Pro are numbered, and once he gets to 100 wins, there is little left on his to-do list. Interestingly enough, Fletcher has won national events at 22 different facilities. The only current venues where he has not won are Epping and Norwalk, so it’s a possibility that he could add those titles this season.

Fletcher knows that he’ll never catch leader John Force, who is still going strong with 147 wins, but he believes he has got a good chance to move into the No. 2 spot should he be able to pass Frank Manzo’s total of 105 wins. 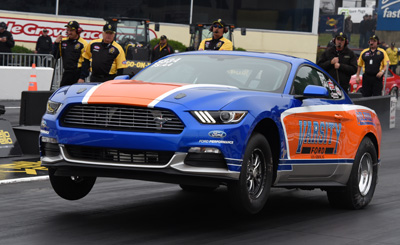 Who will shine in the Factory Stock Showdown?
The School of Automotive Machinists and Technology NHRA Factory Stock Showdown has expanded to five events this season, which means that fans in Gainesville, Charlotte, Norwalk, Indianapolis, and St. Louis will have the opportunity to see the heads-up battles between the Cobra Jet Mustang, COPO Camaro, and Drag Pak Challenger factory race cars.

Last season, David Barton threatened to run the table in the four-race series with his Gary Wolkwitz-owned COPO Camaro with three dominating wins in the first three races. Barton’s bid for a sweep was stopped cold during the Chevrolet Performance U.S. Nationals where Chris Holbrook dominated with his Cobra Jet. Both Barton and Holbrook have run in the low-eight-second zone at more than 165 mph, and they are the leading candidates to become the first Stock driver to earn a seven-second time slip. Both drivers insist that their cars are capable of running in the sevens, but much like the 200-mph barrier in Pro Stock Motorcycle, they’ll need a perfect combination of track and weather conditions in order to do it.

While Barton and Holbrook are arguably the two biggest stars in the Factory Stock Showdown, the class, which many have dubbed “Jr. Pro Stock” is far from a two-man show. Chuck Watson, Steven Bell, Kevin Skinner, Anthony Bongiovanni, and Fox television commentator and two-time Comp national champion Bruno Massel all field competitive entries. Pro Stock driver Bo Butner is building a supercharged Factory Showdown Cobra Jet, and there is a good chance that at least one other well-known NHRA Pro driver will make an appearance in the series this season. At some of the bigger events last season, there were upwards of 20 cars trying to make the eight-car Factory Showdown field and that trend should continue this season.

Finally, while the Ford and GM brands have shown considerable performance potential in the Factory Stock class, it has been a while since the Dodge program has enjoyed success. That figures to change this season since parent company FCA has devoted additional resources to building and promoting their NHRA Sportsman racing program. The Drag Pak Challengers were late to the party as far as supercharged engines go but they have reportedly come a long way this winter, a move that should help achieve the three-brand parity that helps make the class so popular. 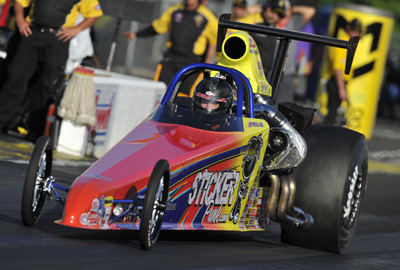 Can anyone double-up at a national event?
There are a lot of NHRA Sportsman drivers who race multiple entries, but to this point, a double win is still a rarity. Since Pat Austin ushered in the era of the double in 1991, just 20 drivers have combined to accomplish the feat a total of 33 times. There were three doubles in 2015 but only one last season when Jeff Strickland claimed the Stock and Top Dragster titles in Gainesville. Incredibly, Strickland went on to win national championships in both eliminators, an even rarer feat.

In addition to Strickland’s double, there was another near-double when Jimmy Hidalgo Jr. drove to a pair of final rounds in Atlanta, where he finished with a win in Super Stock and a runner-up in Stock.

The last year that did not feature at least one double was 2010, so it stands to reason that at least one driver will go the distance in two classes this season. There were four doubles in 2012 and 2013, so it seems that the trend favors drivers in two eliminators.

In addition to the usual suspects like Fletcher, Rampy, Peter Biondo, Gary Stinnett, and Tommy Phillips, a couple of drivers who have yet do double but could easily join the club are Steven Furr, Slate Cummings, Trevor Larson, Hidalgo Jr., and Marco Abruzzi, all drivers who have shown the versatility necessary to win two classes in one event.