A final round for the ages

The Indy Stock final between Larry Gilley and Darrel Steiger was a heads-up, no-breakout battle between two of the most evenly matched cars in the grounds, and they did not disappoint
13 Sep 2017
Kevin McKenna, NHRA National Dragster Senior Editor
The Sports Report 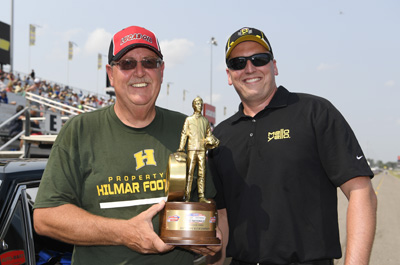 During Thursday’s Stock Class eliminations at the Chevrolet Performance U.S. Nationals, more than 160 drivers from all over North America slugged it out for bragging rights and a coveted gold NHRA Wally trophy. A total of 39 individual class champions were crowned on Thursday, including Darrell Steiger, who wheeled his clean ’70 Challenger T/A to the title in E/SA. Steiger, from Clayton, Ind., outlasted a field of seven entries to claim the win. In the final, he defeated California’s Larry Gilley in a close battle, 10.636 over 10.646. While he celebrated his win well past the finish line at Lucas Oil Raceway at Indianapolis in the class winner’s circle, there was no way for either racer to know they hadn’t seen the last of each other.

Four days after their race to decide the E/SA title, Steiger and Gilley met again on Monday afternoon in the final of the 63rd Chevrolet Performance U.S. Nationals. Not surprisingly, it was another close battle and this time, it was Gilley’s turn to shine with a slight holeshot and a 10.622 to 10.691 victory. The final margin of victory was just seven-thousandths of a second.

“A final round, heads-up, it doesn’t get any better than that,” Gilley said. “I feel privileged just to be here. I’m just like everyone else, but it was just my day today. I tried to keep it consistent and did that. The air changed a lot today so we had to keep track of that, and I tried to do a good job driving. It just all worked out. 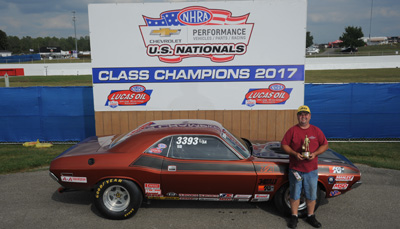 This was my first trip to Indy and when I got there, I didn’t know if I’d even qualify,” Gilley said. “On the first run, we hopped the car up just to make sure we’d get in the field. Then we got to the class final. I had my buddy, Brad Van Lant with me. He lives in Missouri and he knows a thing or two about how to tune for that air because it’s a lot different than the west coast.”

“When I lost the class final, I was disappointed,” Gilley said. “He outran me by a hundredth and had a little better light. When I saw the time slip, I realized I could have won that race if I’d have done a little better job. After that, we just decided to concentrate on the eliminator and get ready for the firtst round. Never in a million years did I think we’d race again in the final heads-up.”

Gilley needed to survive several tough battles as he worked his way through the mammoth 128-car field. He topped two-time Topeak winner Verne Buchanan, survived a .001 light by Drew Whalen, and also earned a semifinal win over his Northern California neighbor, Steve Wann. Since they had raced in the class final, Gilley didn’t expect many surprises when he and Steiger squared off again in Monday’s final. However, he wasn’t taking any chances.

“I didn’t know,” Gilley said. “I assumed he was hopped up in the class final but you never know what a guy can do. We just did what we could do. We iced it down and put some light oil in it. Basically, we did the same thing that we’d done for the class final. To race the same guy in the final round and win another close race, that was just 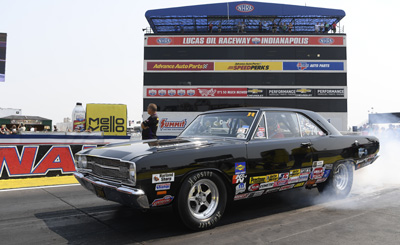 Although he lost the final, Steiger had plenty of reasons to feel good about his Indy performance. For one, he earned the E/SA class title, no easy feat in itself. He also had a tough road to the final with races against John Shaul, J. Allen Sherman, both Candies brothers, J.B. and Brett, and 101-time national event champ Dan Fletcher. In that battle, Steiger used a .009 light to move into his second U.S. Nationals final. He was also a runner-up to Grant Lewis in 1991.

Gilley has won two previous national events, the 2009 Sonoma race and the spring Las Vegas race a year later, but he’s quick to admit that nothing compares to the feeling of an Indy win. It’s been almost two weeks since Gilley won the sport’s biggest event and the impact of that victory has still not sunk in.

“It is a dream come true for sure,” he said. “I’m like every other racer; I’ve wanted to win Indy ever since I started racing. I had a lot of help from Brad Van Lant and my brother, Kenny. I also have to thank my wife, Debbie, and our son, Jason. Every time I go to the races, he tells me to bring him a trophy. I got a pretty good one this time.”