The Amalie NHRA Gatornationals will not only feature the first event of the season for racers in the Pro Stock Motorcycle and the J&A Service Pro Mod series, but it will also mark the 2017 debut of the new and improved School of Automotive Machinists & Technology NHRA Factory Stock Showdown. The popular event, which features heads-up competition among modern-day muscle cars, has undergone a number of changes this season, including an expansion from four to five events. On the eve of the season-opener, here are five Facotry Stock questions to be answered: 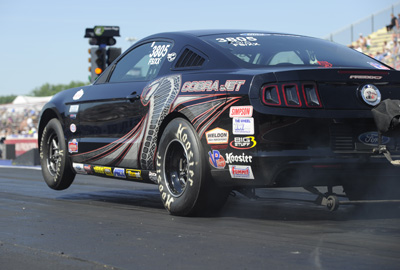 What’s new?
This season competitors in the Factory Stock Showdown will qualify together as a group rather than being dispersed throughout the Stock Eliminator qualifying field as in past years. The move to designated qualifying sessions will undoubtedly produce a lot of drama since there 22 entries expected in Gainesville and just eight available qualifying spots.

From a competitor standpoint, another change for 2017 is a move from a full countdown Christmas Tree start to a five-tenths Pro Tree. That move figures to be very popular with Factory Showdown participants and should help to drastically reduced red-light starts. 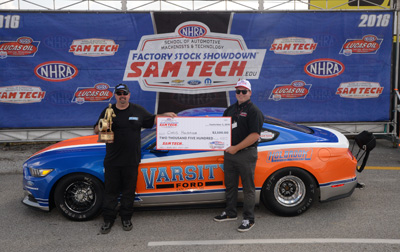 Will the seven-second barrier be broken?
A year ago, before the start of the 2016 SAM Tech Factory Stock Showdown, no NHRA Stocker had ever run quicker than 8.32 but that record didn’t stand long. After winning in Gainesville with his COPO Camaro, David Barton produced the sport’s first 8.2-second run in Englishtown and by the end of the year, both Barton and his closest rival, Ford racer Chris Holbrook, were running 8.0s. Both Holbrook and Barton went to the Pennsylvania Dutch Classic last year with the intention of running in the sevens but neither driver could make it happen. Both racers believe they have the horsepower to run a seven, but applying it to the race track on a 9-inch rear slick is proving to be a bigger challenge. Gainesville Raceway has been the site of many barrier breaking runs and weather permitting, it’s entirely possible that someone will leave with a sub-eight second time slip. As a side note, it’s also not out of the question that a Factory Stock racer could exceed 170-mph for the first time although the seven-second run appears far more likely.

Can anyone challenge Holbrook and Barton?
Based solely on last year’s results, where Barton won the first three SAM Tech Factory Showdown races in Gainesville, Englishtown, and Norwalk, and Holbrook claimed the fourth and final title in Indianapolis, the dynamic duo certainly appear to have an edge against the rest of the field but they are not infallible. The combination of small rear tire and 1,000-plus horsepower means that Factory Showdown cars can be a handful even on the best-prepared tracks and prone to a bit of tire slippage. That is especially true for Barton and Holbrook as they are expected to pull out all the stops to run in the seven-second zone.

Should Holbrook or Barton falter the racers most likely to pick up the pieces include former Factory Showdown winner Kevin Skinner, or possibly Chuck Watson. Skinner has consistently been among the top qualifiers with his Cobra Jet Mustang, which is backed by his family business, Columbus Joint and Clutch. Skinner will reportedly debut a new 2016-model Cobra Jet this weekend and given the technological advancements from year to year, one would have to think he’ll be in the mix. Watson’s company, Watson Racing, has played an integral role in the development of the Cobra Jet Mustangs and he will also be wheeling a 2016-model in Gainesville. Also from the Ford camp, veteran Don Fezell, the first Stock driver in the eights, ran a career-best 8.26 with his 2008-model Cobra Jet during the recent NMRA event in Bradenton, Fla. 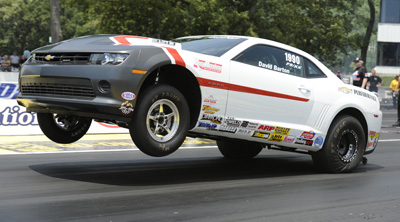 Who are the Chevy drivers to watch?
The current 22-car entry list features eight COPO Camaro entries including Barton’s car, which is owned by Gary Wolkwitz. While Barton figures to be the favorite, other COPO drivers to watch include Stephen Bell, Todd Patterson, and a driver who should be very familiar to NHRA fans, two-time NHRA Mello Yello series Pro Stock champion, Erica Enders. Bell’s Louisiana-based COPO has been prepared by veteran Pro Stock racer and engine-builder Greg Stanfield and he qualified No. 6 in a very competitive field at last year’s Chevrolet Performance U.S. Nationals. Patterson and Enders will be racing as teammates as part of the Omaha Track team. Both drivers will be wheeling the first of the new 2017-model COPO Camaro entries. Patterson is part of an alliance with the Elite Motorsports team, which currently fields three Pro Stock cars for Enders, Jeg Coughlin Jr., and Vincent Nobile. A week before their Gainesville debut, Enders and Patterson were testing during the NMCA muscle car event in Florida. Depending on how quickly they can get the new combination up to speed, they certainly appear to be capable of challenging for the title.

Can a Dodge be competitive?
The short answer is yes, and if you ask any of the class’ more successful engine builders, they might argue that the supercharged Dodge combination, while still relatively new, has the greatest amount of untapped potential. At this point, the Mopar contingent features just two entries, the DragPak Challengers driven by Kevin Helms and Geoffrey Turk. Helms is a four-time national champion in Stock, and he’s easily one of the class’ best drivers. As a member of the Southland Dodge team, it’s hard to imagine he won’t arrive in Gainesville without a competitive engine under the hood.