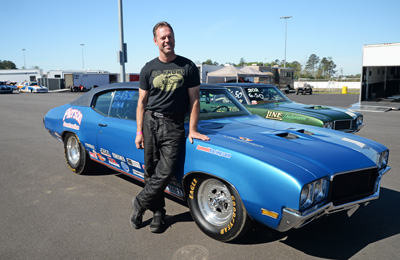 Jason Line and the KB Racing team are generally all business with the sort of 24/7 mindset that is necessary for success in Pro Stock. However, with a three-week break between the national events in Las Vegas and Houston, Line had a chance to step out of the dyno room for some quality time with his family. Line’s off weekend did involve a dragstrip, but instead of his six-second Summit Pro Stock Camaro, he was behind the wheel of his trusty D/SA ’72 Buick GS, a car that he has owned for a quarter-century. Racing at the Division 2 NHRA Lucas Oil Drag Racing Series event at GALOT Motorsports Park, Line enjoyed a successful weekend that included the No. 1 qualifying spot and a runner-up finish.

“Our friend Jimmy Alund was here from Sweden, and this was a great opportunity to race with him again and to have some fun with my family — especially my son, Jack, who is very interested in racing,” said Line. “This let him see a different side of racing than what he’s used to, and he was able to work on the car, help me, and be part of it. We all had a great time, and it was a lot of fun.”

Long before he won three NHRA Mello Yello Pro Stock championships, Line was one of the most feared Stock racers in the country and the 1993 national champion. Unlike some of the Sportsman racers who eventually go on to success on a professional level, Line has never lost touch with his roots, and he doesn’t remotely consider Stock a step down from Pro Stock. In Line’s opinion, both classes are very similar because they involve refining a particular combination to perform under a strict set of guidelines. To that end, Line was especially pleased that he also qualified in the No. 1 spot.

“I really like working on my own car, and I had done some work to my Buick and just wanted to see how fast it would go,” Line said. 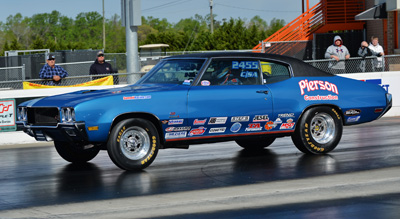 Line managed to reach the final round, where a narrow loss to multitime Division 2 champ Jeff Adkinson prevented a storybook ending. For the record, Line’s last Lucas Oil Series divisional wins came in 1993, his championship season, when he won three straight events in his native Division 5.

“What a great weekend. We loved the facility, and everyone there was super nice,” said Line, who was joined at GALOT by wife Cindy, daughter Emma, and son Jack. “The best part of the weekend was being there with my family. My boy was so excited that he told his mom he would have to miss his Friday night dodgeball game because we had to get the Stocker ready to go. I love cars, and this is something Jack and I can do together. He’s been surrounded by it forever, but this is a chance for him to really start at the beginning and see how it works. As a father, to be able to work on an old muscle car with my son, it’s really special.

“Before the final, Jack looked at me and said, ‘Dad, this is the most fun I’ve ever had. We should do this every weekend.’ This was so fun, my kids were so excited, and it was one of my favorite days ever going to the racetrack.” 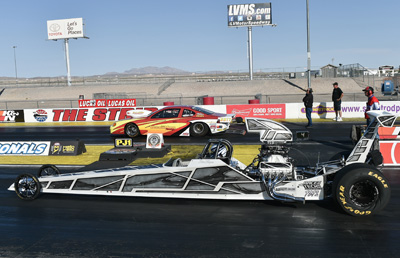 Second chances: Last week’s Division 7 Lucas Oil Series event at The Strip at Las Vegas Motor Speedway attracted more than 600 entries, making it one of the biggest Lucas Oil Series events of the season. The huge car count included 71 entries in the Top Dragster class and another 58 competitors in Top Sportsman. Even with expanded 48-car fields in each eliminator, there were 33 competitors on the sidelines after the conclusion of qualifying. That’s where Division 7 Director Mike Rice and LVMS dragstrip manager Jeff Foster stepped in. Rice and Foster each ponied up $100 and encouraged supporting manufacturers to do likewise, and they held a special Top Comp event for the non-qualifiers. Word spread quickly through the pit area and support grew quickly. In less than 24 hours, the prize pool swelled to more than $1,300 in sponsor donations and a $100 entry fee helped sweeten the pot.

Almost every non-qualifier in Top Dragster and Top Sportsman took advantage of the bonus event, which many dubbed the "Turtle Race", and in the end, Top Dragster racer Shane Thompson squared off against Top Sportsman’s Dick VanderMeer. Thompson, coming off a perfect .000 reaction time on his semifinal bye run, repeated the perfect light in the final and ran a 7.454 on his 7.42 dial for the win while VanderMeer posted a 7.603 on his 7.56.

“We had a lot of fun with this race,” said Rice. “It was just a nice way to reward all the racers who came down to support this event. It’s great to see how much support we’re getting for Top Dragster and Top Sportsman, but I also hate to see racers go home and not qualify. We may have to try this again sometime.” 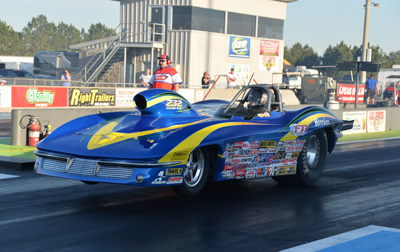 Who’s hot: With three Lucas Oil Series events last weekend in Divisions 2, 4, and 7, there was plenty of Sportsman action from coast to coast. Just two months into the season and several racers are already starting to build a nice points cushion. In Division 4, Kevin Helms drove to a runner-up finish at the event at No Problem Raceway Park. The four-time NHRA Stock national champion has already been to three final rounds in Stock with two wins, and he’s ranked in the top 10 in both Stock and Super Stock.

In Las Vegas, Kyle Rizzoli wheeled his ’69 Camaro to the win. Rizzoli won the Stock title at the Phoenix national event last month, and he’s also a threat to post a top-10 finish in both categories.

At the GALOT Motorsports Park event in Division 2, John Labbous Jr. padded his lead in the Super Gas standings after winning his second straight event. Labbous is also in the top five in the Super Comp class after winning the first event of the season at Orlando Speed World Dragway.

Finally, the Stock final round from the No Problem Raceway Park event is worth noting since it featured part-time NHRA National Dragster columnist Brenda Grubbs in her AA/SA ’69 Camaro. After six tough rounds, Grubbs took on the similar AA/SA entry of Justin Hutto in a heads-up, no-breakout battle. Hutto had the quicker car in qualifying and made his best run of the weekend with a 9.81 to cover Grubbs’ solid 9.987 effort.