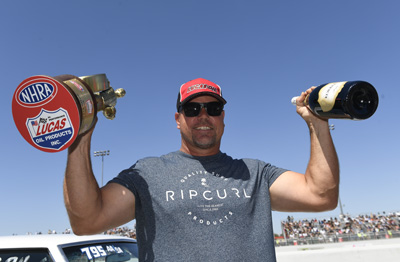 As the son of former national champ Jerry McClanahan and the father of 2010 Super Stock national champ Ryan, Brian McClanahan has been to the winner’s circle many times at NHRA national events, but he didn’t have a Wally trophy to call his own until he defeated Dwayne Scheitlin in the Stock final round on Sunday in Sonoma. McClanahan left first, .019 to .045, and held on for a narrow win with a 9.871 on his 9.84 dial. Scheitlin matched his dial with a 10.116, but he was .001-second behind at the finish line.

“This is a dream come true; it took a long time to finally get it done,” said McClanahan. “You’ve got to make them tight down there. I gave the throttle a couple of whacks to pull ahead. I tried to take more than .001 [second]. I misjudged it a bit, but hey, the win light came on.”

McClanahan was in the final round of the 2011 Phoenix event and the 2015 Finals in Pomona, and he broke in both of them. This time he had no such mechanical issues.
Driving his AA/SA ’69 Camaro, one of the quickest cars in the Sonoma field, McClanahan defeated Jon Irving Jr., Brad Burton, Carl Battis, Joe Sorensen, and Justin Jerome to reach his third career final. 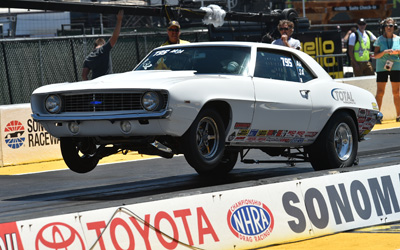 “We’re a family team,” said McClanahan. “My son, Ryan, helped me dial the car, and I just had to cut a light and drive the stripe. It was a great weekend.”

From 1973 to 1978, the late Jerry McClanahan won four national events in Stock, including the championship-deciding Ontario Motor Speedway events in 1974 and 1978. Third-generation racer Ryan has claimed six national events of his own and now all three generations of McClanahan’s have won NHRA national events, joining a short list that also includes Johnny, Shane, and Tanner Gray.

The best of the rest: McClanahan wasn’t the only first-time winner in Sonoma. In fact, he was one of four drivers who were able to hoist their first Wallys, including Evan Kowalski (Super Gas), Chris Borges (Super Street), and Bart Smith (Top Sportsman presented by Racing RVs.com).

The Super Stock final in Sonoma featured Justin Lamb and Jody Lang, two drivers who have achieved a fair amount of success. Lang’s Chevy Malibu is one of the slowest cars in Super Stock, but he’s not the least bit afraid to race against faster cars, including Lamb’s eight-second Modified car. Lang left first by a few thousandths and then ran right on his dial to freeze out Lamb, who missed his dial by .02-second. Lang, who also defeated 101-time winner Dan Fletcher, now has 27 national event wins to his credit, including four at Sonoma Raceway.

En route to his fourth career win, Super Comp champ Val Torres Jr. defeated his brother, Gabe, in the quarterfinals and then went on to defeat Ryan McClanahan in the final. Torres was almost unstoppable with a .001 light and an 8.919 while McClanahan, looking to join his father, Brian, in the winner’s circle, came up a round short with a close 8.920. 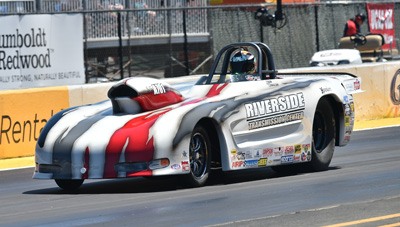 At 20, Super Gas champ Evan Kowalski became the latest graduate of the NHRA Summit Racing Jr. Drag Racing League to find success on the national event level. In his 10th appearance at a national event, Kowalski gained a sizable lead against Chris Cannon in the final round and won on a holeshot, 9.941 to a near-perfect 9.903. Afterwards, Kowalski noted, “My car was flawless. I couldn’t cut a light, but the car made me look good.”

Kowalski winning his first national event title in 10 starts was impressive, but then there was Super Street champ Borges, who won in his national event debut. Racing in the “big show” for the first time, Borges topped Matt Blodgett in the final, 10.921 to a 10.898 breakout. Borges also won his pressure-packed semifinal round against Sean Eling with a near-perfect 10.902.

Top Dragster winner Paul Nero didn’t leave much room for opponent Jeff Havens in the final round with a package that included a .010 light and a 6.708 on his 6.70 dial. Nero’s consistency helped him survive a couple of close races, including a semifinal battle against Andy Spiegel that was decided by .008-second and a quarterfinal battle against Michaelyn Roelle that fell in his favor by just seven-thousandths. Nero is a former national event winner, having won the Super Street title at the 2000 Seattle event.

After a tough start to the 2017 season in Pacific Division competition, former drag boat racer Smith picked the right time to get over the hump and collect his first win in the Top Sportsman presented by Racing RVs.com class after final-round opponent Keith White fouled in his Ford Ranger. The No. 24 qualifier in the 30-car field, Smith was solid on the starting line, but his path to the winner’s circle can be traced directly to his ability to choose the correct dial-in. Through the first four rounds, Smith matched his prediction within a few thousandths of a second which helped secure wins over tough opponents, including reigning national champ Mike Williams. In the final, Smith was able to chop the power early and enjoy the ride after White fouled at the start. 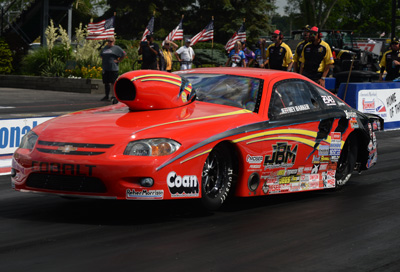 In other news: While West coast racers were enjoying a picture-perfect weekend at the Toyota NHRA Sonoma Nationals, racers in the middle of the country were invading Heartland Park Topeka for the annual Division 5 NHRA Lucas Oil Drag Racing Series double-header weekend. Nearly 650 entries made the trip and none fared better than Southeast Division ace Jeffrey Barker, who swept both events in the Top Sportsman class. With his two wins, Barker is now a big favorite to capture his second Top Sportsman national championship in the last three years. Austin Williams also took over the top spot in Super Comp with a pair of runner-up finishes. With more than 128 Super Comp entries, Williams received 104 points for each of his final-round appearances.