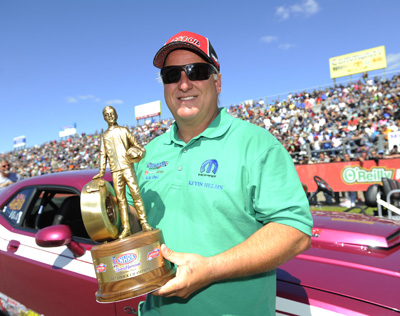 Kevin Helms missed his second career double by a fraction of a second when he lost in the Super Stock final, but that was about the only thing that went wrong for the four-time champion during last weekend’s NHRA SpringNationals in Houston. Helms won the Stock title when he drove Jeff Teuton’s Challenger past Austin Ford’s Cobra Jet Mustang, and a few minutes later, he returned to face Norvell Bowers for the Super Stock title. Bowers got the win in another close battle, but Helms isn’t about to complain.

“Everything is going pretty well,” Helms said. “That was [national event] win No. 25, and I’ve been in 42 finals, so that’s not a bad average. In the semifinals, when I ran Brett Candies, I think we both ran into a big gust of wind. We both ran off, and I dialed up for the final. I thought I was safe, but I ended up on a breakout run, and that did me in. I’ve known Norvell for a long time, and I was really happy to see him win. Before we ran, he said to me, ‘Well, I’d hate to keep you from that double.’ And I told him, ‘Well, I’d hate to keep you from winning your first.’ In the end, it worked out for both of us. I was very happy for him.”

Despite the loss, Helms is off to a roaring start in Super Stock with a pair of runner-up finishes and a semifinal to his credit. He currently leads the Super Stock standings by a significant margin. While Helms has been solid in Super Stock, his record in Stock is otherworldly. In six races, Helms has bagged three wins and a runner-up. He has already got a massive 499-point score, which would typically be almost enough to assure a top-10 finish. Helms’ 2017 season is beginning to resemble his most recent championship campaign in 2015. That season, Helms also got off to a hot start, but he’s being extremely cautious when it comes to predictions.

“Right now, everything is going great,” he said. “When I look back at 2015, I got off to a great start, but I still had to have a runner-up in Charlotte and win in Bristol in September in order to finish it off. I had 680 points that year, and it was barely enough, so there is still a lot of work to do. All I’ll say is that this is a good start. It’s subject to change at any moment.” 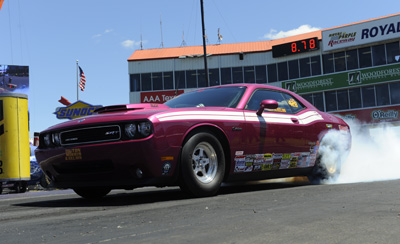 Helms’ battle in the Houston Stock final was memorable when he faced Austin Ford in a battle of late-model muscle cars. Ford has been having traction issues with his SAM Tech Mustang, so he has employed an unusual tactic. Racing a car that is capable of running in the 8.5s or quicker, he has been dialing up by more than a second and pacing his opponent. Helms countered with a strategy that called for Ford to cross the finish line first, counting on the high probability of a breakout run.

“He’s been having a tough time with that car, and his whole game is to rip the Tree and then take as little [margin] at the finish line as possible,” said Helms. “I just needed to make sure I could run my number and then cut him loose. He was pacing me from half-track on, and I parked it at the first [mph] block. He broke out, and I was .01-second over. That’s pretty much how I wanted it to play out.

“I also have to thank whoever was in charge of making the schedule on Sunday,” Helms noted. “I tried to hurry as much as possible with both cars, and I know NHRA adjusted the running order to give me as much time as possible. That was greatly appreciated.”

Helms plans to pursue both the Stock and Super Stock titles as part of the Southland Dodge team, but he has also got a side project underway, namely a new Drag Pak Challenger that will soon debut in the School of Automotive Machinists and Technology NHRA Factory Stock Showdown. Helms plans to test the car soon, but he isn’t sure when it will make its competition debut or who will be driving it.

“Ideally, I’d like to drive the car in Norwalk, but there is a good chance I’ll need to claim that race for points in Stock, and it probably isn’t a good idea to show up with a brand-new Showdown car,” he said. “I’m not sure what we’ll do, maybe look at finding a Pro to drive the car at that race. I’m in a little bit of a quandary, but it’s a good problem to have.”

The best of the rest: 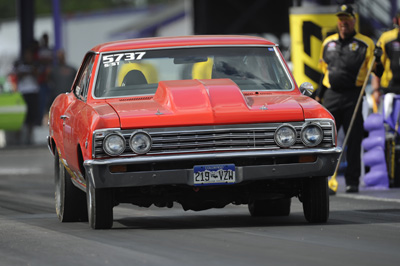 Alan Savage scored his second national event title in Super Comp when he drove past Britt Cummings in a double-breakout final round. Savage had the better light in the final, and he used it to his advantage to claim the win. Savage’s other national event title also came in his home state of Texas, at the 2014 Dallas event.

Steven Collier did everything he could to make sure he didn’t lose the Super Gas final, and that included posting a nearly perfect run that opponent Roger Warren could not match. Collier won the Houston event for the third time in the last four years with a package that included a .008 light and a perfect 9.900. Warren was competitive with a .018 light and an 8.899 run but couldn’t do much against Collier.

Chris Vang made the long trip to Houston from his home in Parker, Colo., pay off with his first national event title in Super Street. Vang wheeled his ’67 Chevelle to the title following a frustrating -.001 red-light by final-round opponent Val Harmon. Vang was sharp in every round, including the second round where he had a perfect .000 light against Chanse Bullock. 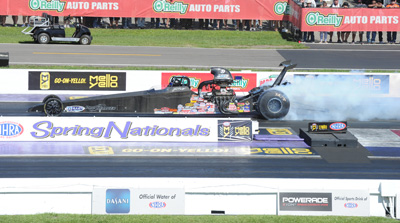 In his last three appearances at Royal Purple Raceway in the Top Dragster class, J.R. Baxter has yet to see anything other than a win light in his lane. After winning the Top Dragster presented by Racing RVs class in Houston in 2015 and 2016, Baxter completed the ultra-rare three-peat when he topped fellow Texan William Kruse in the final round. In a rematch of the 2015 Houston final, Baxter ran his winning streak to 15 consecutive rounds after Kruse fouled by .004-second. On race day, Baxter’s dragster was solidly in the 6.1s, making it one of the quickest cars in the field.

A pair of Division 4’s best met in the final to decide the title in the Top Sportsman presented by Racing RVs class. Keith Raftery caught a tremendous break in the semifinals when he was late against Arlie Boggs, but he survived to make the final and then downed Vince Hoda with a 6.479 on his 6.46 dial. It was Raftery’s fifth national event victory but his first outside of the JEGS NHRA Cajun SPORTSnationals in Belle Rose, La.