The best Father's Day, ever

With a win and a runner-up, Greg Stanfield and his son, Aaron, came within one round of having the perfect Father’s Day in Bristol.
21 Jun 2017
Kevin McKenna, NHRA National Dragster Senior Editor
The Sports Report 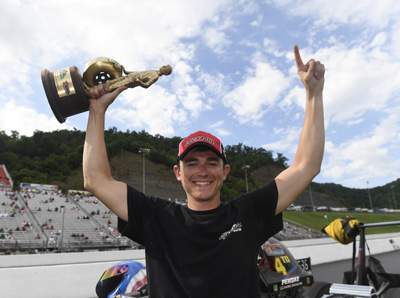 Greg Stanfield got beat by first-time winner Marty Rinehart in the Bristol Super Stock final but the sting of losing was tempered by the Father’s Day gift he got from his son, Aaron, which happened to be the Bristol Top Dragster Wally. The younger Stanfield, who made a name for himself in Pro Stock as a teenager and has since become a solid contender in a variety of Sportsman classes, earned his third national event title when he stopped Angie Travis in the final round.

Much like his father, who used his calm demeanor to win four national championships in a five-year span, Aaron Stanfield apparently doesn’t rattle easily. In the final round, he cut a near-perfect .001 reaction time and ran a 6.370 on his 6.46 dial to freeze out Travis, who was more than competitive with a .033-second package.

“I love racing with my family,” said Stanfield. “This is a great family sport and I can’t think of a better gift to give my dad on Father’s Day than this [win]. He told me to be calm and that’s the best advice I’ve gotten. I rolled a bit into the [delay box] before the final and thank God that dad told me to do that.”

Stanfied’s brief time in a Pro Stock car was no doubt helpful in helping him make the transition to a low six-second Top Dragster. In addition to his final-round win over Travis, he also ran a perfect 6.360 on his 6.36 dial in round two against Joe Fisher and used a .006 light to help defeat former Super Comp national champion Kevin Brannon in the quarterfinals.

As for Greg, his run towards a possible father-son double ended in the Super Stock final, where Rinehart scored his first win with a 9.980 on his 9.96 dial. Stanfield gave up a hundredth at the start and couldn’t make up the difference with an 8.731 on his 8.71 dial. Rinehart didn’t get to the final by accident. In the semifinals, he was nearly perfect when he drove his clean ’69 Camaro to a .010-second package to stop former national champ Ricky Decker. 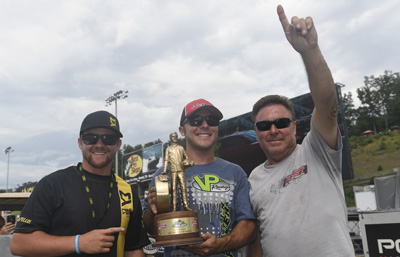 The best of the rest: Greg Stanfield wasn’t the only Division 4 racer to have a memorable Father’s Day. Jimmy Hidalgo also celebrated after watching his son, Jimmy Jr., win the Stock title. Jimmy Jr., affectionately known to his friends as “Cooter,” has been a frequent visitor to the winner’s circle and lately, he has carried a single digit number, which is symbolic of a top-10 finish the previous season. After the final, Hidalgo Jr. shared Stanfield’s sentiment regarding family racing.

“I think dad gets a little more excited than me,” he said. “It’s special to win on Father’s Day. The only thing that would have made it more special was to race [dad] in the final. We enjoy racing together. It’s not the same if we’re not together.

“I wish I learned as much as I taught him; he’s a hell of a driver.” Added Jimmy Sr.

In last week’s edition of The Sports Report, we chronicled how John Labbous Jr. lost in the Super Gas final in Englihstown to Dan Northrop, but he may have won the war by adding to his already impressive points total. Labbous has dominated in Super Gas competition this year and it’s going to be difficult for anyone to unseat him. Fast forward to Bristol and Labbous raced in the final for the third-straight week. This time, he was in Super Comp and finished as a runner-up to David Morris, who left nothing on the table with a .002 light and an 8.905. While Morris celebrated his first national event victory, Labbous was left to lick his wounds but he has not got an impressive score going in Super Comp, so the possibility of him joining Scotty Richardson and Jeff Strickland as a double national champ is not out of the question. 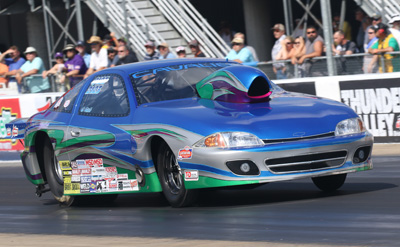 For the last half-decade or so, Steve Furr has done his share of damage in both Super Gas and Top Dragster. In Bristol, Furr scored again when he drove his venerable Camaro to the Super Gas title. Racing former national champ Jacob Elrod in the final, Furr was another driver who split the atom down the middle with a .008 light and a 9.914. Elrod was .021 off the starting line and broke out with a 9.896 in the close final. For Furr, it was his sixth overall victory and second-straight at the Thunder Valley Nationals after last year’s win in Top Dragster presented by Racing RVs.

Just as Labbous doesn’t lose many finals in Super Comp or Super Gas, neither does Jeffrey Barker in the Top Dragster presented by Racing RVs class. Barker, the inaugural Top Sportsman national champion in 2015, reached his ninth national event final but was thwarted by Roberts, who turned on the win light by a thousandth of a second. Following the big win, Roberts joined Rinehart as a first-time NHRA national event champion.