Another week, another double

With a little help from his friends, John Labbous Jr. becomes the latest driver to double-up after winning the Super Comp and Super Gas titles at the NHRA Four-Wide Nationals.
03 May 2017
Kevin McKenna, NHRA National Dragster Senior Editor
The Sports Report 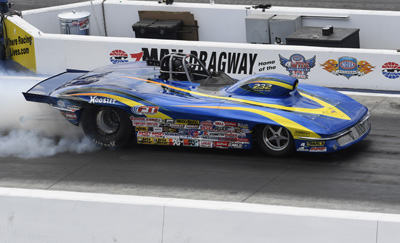 Believe it or not, a double victory remains one of the most difficult feats to accomplish in NHRA drag racing. As most drivers know, winning one race is hard enough but to win two on the same day is extremely problematic. Despite the challenges of a double, the first six events of the 2017 season have produced two doubles and a near miss. Ed Olpin kicked off the season by winning the Top Sportsman and Super Gas titles in Pomona and Houston, and Kevin Helms earned a win in Stock and a runner-up finish in Super Stock. Now, John Labbous Jr. has joined the party with Super Comp and Super Gas wins at the NHRA Four-Wide Nationals.

“This is pretty amazing,” said Labbous, who drives for team owner Anthony Bertozzi. “To be perfectly honest, I got down to [the last] four cars here in both classes and didn’t win either one of them. I’ve been to about the last five or six races here because I really like this track. I love racing here, but I felt like this place owed me one. I just never dreamed it owed me this.”

First up for Labbous was the Super Comp final against Franklin DiBartolomeo. After an even start, Labbous trimmed the finish line stripe to just six-thousandths of a second to take an 8.909 to 8.916 victory. Jumping over to the Super Gas final, Labbous left little room for opponent Matt Tankersley with a .001 to .023 advantage at the start. In a double breakout, Labbous turned on his 12th straight win light, 9.895 to 9.883.

“I fell on the tough side ladder in Super Comp, which is to say I could not get a bye run,” Labbous said. “In Super Gas, I was on the good side, which is hard to say based on the quality of the drivers out there, but I had fewer cars and a semifinal bye, so that worked out really well for me. 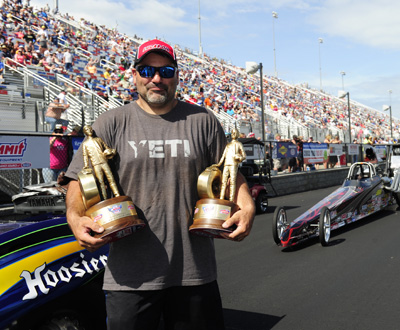 “I won the Super Comp final first, and I was obviously very happy, but before I even got off the track, I had to remind myself to not get too wound up,” Labbous said. “I had to get my game face back. I’m sure the .001 light in the Super Gas final was a result of adrenaline from winning the first one. I’d just won a national event, of course I was pumped up.

“When I was still in both classes heading into Sunday, I had a lot of confidence,” Labbous said. “I would not let myself think that I wasn’t winning both of them. I expect that at every race where I bring two cars. You should think about winning or you’re not supposed to go. That’s always been my mentality, but the truth is you’re not going to win both every time and you’re not even going to win one class most of the time. For me, I just had a little extra confidence.”

Labbous went on to reveal that the source of his extra confidence was the presence of West Coast racer Kyle Seipel, who flew in to drive another one of Bertozzi’s cars in Top Dragster. “Big Nasty”, as Seipel is known to his friends, lost early and then devoted the rest of the weekend to what many consider his specialty, which was helping Labbous dial both of his cars.

“Kyle came in and told me, ‘All you have to do is turn loose of the [expletive] button. We’ve got the rest handled.’ He just asked me what I wanted the car to run and he watched the weather and the track and made all the adjustments. That’s not really my style. I’m not capable of that. I do things my own way, and I’ve been fortunate to have success. We did it Kyle’s way and we were on the number 95 percent of the time.

“We talked often and by Sunday, we pretty much agreed on everything. That allowed me to focus on my driving and it was a big deal, probably more than Kyle even knows. Every time I pulled in water, I didn’t have to think about anything but hitting the Tree and making my run. That made it way more fun than it normally would be because I wasn’t second-guessing myself.” 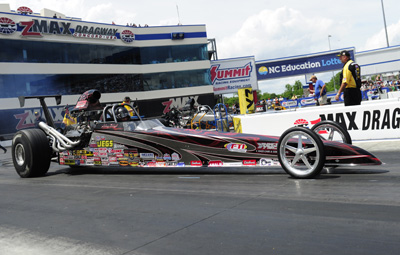 Labbous went undefeated in 12 rounds at zMax Dragway and while that is an impressive feat, it is far from a personal record. He once claimed three wins in three days at the inaugural Spring Fling event at Bristol Dragway. That weekend, Labbous won a $12,500 race and a pair of $20,000 races, winning nearly 30 consecutive rounds.

“I don’t remember how many rounds I won, but I do remember that I also won a week earlier in Bowling Green [Ky.], so it was four-straight races,” Labbous said. “I also remember that Jeff Strickland busted my ass on the last day of the Spring Fling in the third round.”

Last week, we highlighted the similar effort by Kevin Helms at Houston where the four-time champion earned a win and a runner-up in Stock and Super Stock, respectively. As a result, Helms was ranked first in both classes. Labbous finds himself in a similar position following his Charlotte double. In Super Comp, Labbous opened the season with a win at the Division 2 NHRA Lucas Oil Drag Racing Series event in Orlando, Fla. He has also got a few other mid-round finishes mixed in. Labbous has done the most damage in Super Gas where he has won his last three races, all of them in April. After back-to-back Lucas Oil Series wins at South Georgia Motorsports Park and GALOT Motorsports Park, he won the Charlotte event to improve his score to 467 points, 107 more than second-ranked Rusty Cook.

“It is way too early to even think about a championship,” Labbous said. “Division 1 and Division 3 haven’t even had their first races yet. I think it would be fairly asinine to entertain that idea or even say, ‘I’m going to win it’ at this point. I do have a points total that makes it worth pursuing. That’s all. I’m going to run a lot of the races coming up, like Epping, Englishtown, Bristol, and Norwalk, so my points will be pretty much tapped out by the end of June. I do have a lot of people to thank, including my family and friends, and especially Anthony Bertozzi, Kyle Seipel, and Phil Ivy as well as FTI and Hoosier. They all helped me a lot.” 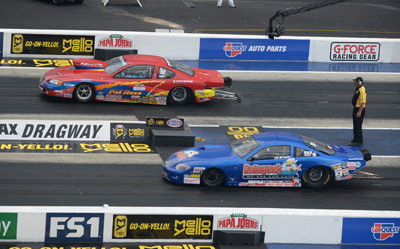 The best of the rest: Millions of racing fans know Bruno Massel as one of the hosts of the NHRA television broadcasts on the Fox networks. Of course, Massel is also a two-time Comp national champion and when he has a rare off-weekend he still likes to compete with both his turbocharged Cavalier and his COPO Camaro Factory Showdown entry. Massel lost a tenth of a second in Competition Index Control penalties before his final-round battle with Pat Ross, but he still had enough muscle to get the job done. Ross got the jump on the starting line but Massel drove by him to win by a scant .002-seconds at the finish line. For Massel, it was his 11th national event win, and 10th in Comp.

The incomparable Peter Biondo scored his 51st career win when he took care of business in the Super Stock class. Driving partner Phil Monteith’s Hatari Firebird, Biondo closed the deal when he topped fellow Division 1 racer Joe Lisa in the final. Off the mark first with a .005-light, Biondo closed the deal with a 9.680 on his 9.65 dial. Biondo had two previous wins at zMax Dragway, both of them at the fall event in September. Biondo has also won at least one national event in 12 of the last 13 years and 27 of his 51 wins have come in Super Stock.

Kyle Kohr, 21, became the latest first-time winner when he drove to the Stock title over defending event winner Jeff Hairrington. Kohr, in his manually-shifted D/Stock ’68 Camaro, was solid in the final with a .036 light and a 10.737 on his 10.70 dial for the victory over Hairrington’s Cobra Jet Mustang. Kohr scored a big win in round three after Dan Fletcher fouled, and he also defeated Jeff Longhany in the semifinals. 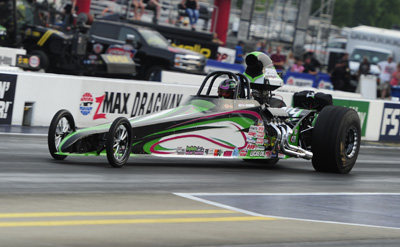 Winning the Top Dragster presented by Racing RVs title in Charlotte might only be the second-best thing that’s happened to Ivey Brannon in the last six months, and that’s because the former Ivey Hutto is recently married to 2015 Lucas Oil Series Super Comp champ Kevin Brannon. Weddings and honeymoons aside, Brannon was plenty excited to claim her first NHRA title after downing another former world champ, Alan Kenny, in the final round. Kenny picked up .007-second at the start, but Brannon made up the difference and won with a 7.148 on her 7.13 dial while Kenny trailed with a 6.243 on his 6.20 prediction.