The 2017 season officially starts this weekend, and among other things, that means Jimmy DeFrank will have an opportunity to pursue a sixth Super Stock national championship.
08 Feb 2017
Kevin McKenna, NHRA National Dragster Senior Editor
The Sports Report 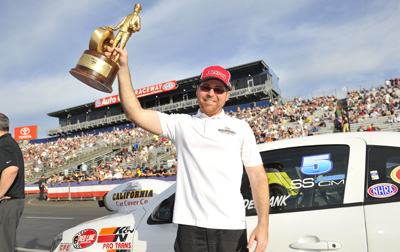 Much like baseball’s spring training, the start of each new season of NHRA Drag Racing brings with it a renewed sense of optimism and hope. The first day of the season-opening Circle K NHRA Winternationals means fresh paint, fresh parts, and an equal points total for every competitor at Auto Club Raceway at Pomona. One driver who has been counting the minutes until the start of the season is Jimmy DeFrank. Coming off a season that concluded with his fifth NHRA Lucas Oil Drag Racing Series Super Stock championship, Californian DeFrank is rested and ready to resume the fight at his home track.

“We’ve been doing a lot in the last few weeks,” said DeFrank. “As far as the prep of the car and the rig, we’re all good mechanically. We even worked on the cars on Super Bowl Sunday. As far as my state of mind, that’s a different story. We have done zero planning as far as this year goes. I even asked my dad [Jim Sr.] what our schedule for the year might be and if I’m going to be driving one or two cars, and we really have no idea.

“I was reading the most recent National Dragster and saw that no one has ever won back-to-back championships in Super Stock. I was on the phone with [former national champ] Justin Lamb the other day, and we agreed that it takes almost a year to recover from the stress of racing for a championship. Out here, in Division 7, our offseason is about as short as it can be. We race in both Pomona races, and we start preparing for the next season the day after the [division awards] banquet. That makes it a challenge to keep focused.”

After years of pulling double-duty, DeFrank elected to park his ’69 Camaro Stocker last season so he could concentrate solely on the Super Stock championship, and that strategy paid obvious dividends. This year, DeFrank will follow a similar path, at least in the short term, with a focus on a single entry while his brother, Tony, returns to action behind the wheel of the family Stocker.

“The whole two-car approach works for a lot of racers, but I just don’t think it’s for me,” said DeFrank. “I get the whole idea about twice the seat time and twice the data, but I just prefer to drive one car and try to be the best I can be in that particular car. That isn’t to say I won’t race the Stocker at some races, but in Pomona, I’m going to concentrate on one race car.” 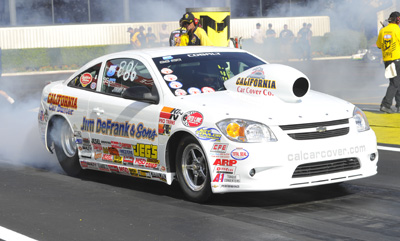 DeFrank has always been at a loss to explain his success in Pomona, but with nine of his 19 career wins coming on the famed Parker Avenue quarter-mile, he’s happy to have two opportunities to race there and to have the track close to his Tarzana, Calif., home.

As for his race car, DeFrank will campaign the same California Car Cover Cobalt that he drove last season. Other than a thorough cleaning, the car is unchanged from last season because as DeFrank put it, “We couldn’t think of anything to do in order to make it better or more consistent.

“I think it’s an advantage to race in Pomona, but I could say that for any track in our division,” DeFrank said. “I tend to get nervous when I go to a new track or a track that I’m not overly familiar with. We race so often in Pomona, Phoenix, and Las Vegas that we’re able to use our notes year after year, and that makes me feel so much more comfortable. It’s also nice to have all three of those tracks relatively close to home.”

DeFrank won the first of his five championships as a teenager in 1997, and now a veteran at 38, he is quick to acknowledge that he appreciates each of the subsequent titles more and more.

“They are definitely harder to win now than they were 20 years ago,” he said. “The older you get, you appreciate everything more and more — family, friends, and just life in general. It’s also harder as a driver. I’m 38 now, so that’s definitely not old, but I can say that it’s not as easy to be consistent as it used to be. When I was in my 20s, it seemed like my lights just came naturally. Now, it’s a struggle, and all the kids coming up today are really good. You just have to work harder and harder to keep up with them.

“Basically, I’m going to try and approach this year like any other,” DeFrank said. “If we see an opportunity, we’ll go after it. Winning a championship is the greatest memory of my lifetime, and I appreciate each of them more and more. You just can’t tell when or if they’re ever going to happen. You certainly can’t predict one before the season starts. That would be a really easy way to embarrass yourself.”

Dan Fletcher will resume his quest for 100 national event victories when he hits the track in Pomona. Fletcher finished the 2016 season with 99 wins, so his next win will be arguably one of his most historic. As usual, Fletcher will be racing two entries in Pomona: his COPO Camaro Stocker and the Chevy Cobalt Comp entry owned by Rick Braun. Fletcher has banked 11 of his 99 wins in Pomona, including the Super Stock title at last year’s Circle K NHRA Winternationals.

For the first time, the popular Top Dragster and Top Sportsman classes will be included in the Pomona program. The Top Dragster field is particularly interesting because there are a number of fast cars entered, including former Division 3 champ Mike Coughlin, Jesse Adams, and Denny Hills, who are all capable of running in the five-second zone. With a 6.00 e.t. limit, all three drivers will have to slow their cars in order to make the field. One other Top Dragster entry that should attract attention is Bryan Fitzpatrick’s Lucas Oil entry. Fitzpatrick previously raced the car in Comp, and with a turbocharged 198-cid engine, it has by far the smallest powerplant in the class. 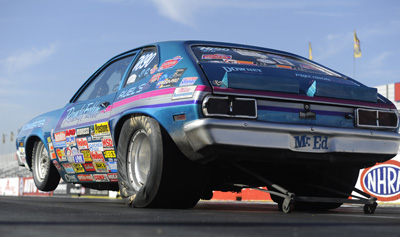 The Pomona Super Gas field will include Gary Cooke, Randy Fabbro (pictured), Ted Seipel, and Ed DeStaute, four drivers who can trace their roots back to the birth of the 9.90 class. Cooke won the Winternationals in 1982, the first year that a national champion was crowned in Super Gas. Seipel won the Pomona opener a year later when he defeated Cooke in the final round. Likewise, Fabbro also bagged a national event win in 1982, winning the long-defunct Golden Gate Nationals. Fabbro has already won a race this season, scoring at the Division 7 National Open event in Fontana, Calif. Ironically, he still drives the same Ford Pinto that he wheeled to his first win in 1982.