Young and young at heart 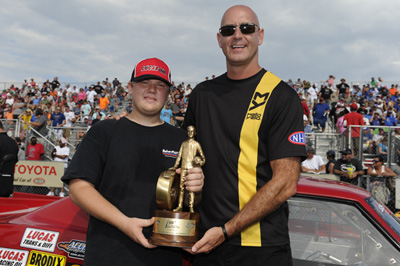 On Friday, Sept. 23, Koy Collier celebrated his 18th birthday by climbing behind the wheel of his father Steve’s ’68 Camaro Super Gas car and making time-trial runs in his NHRA national event debut. Two days later, Collier gave himself the ultimate birthday present when he hoisted the Wally after winning the final round of the AAA Insurance NHRA Midwest Nationals. In a sport where timing is everything, Collier’s timing was impeccable. Had the St. Louis event been held a week earlier, he would not have been eligible to compete because NHRA rules require that all national event competitors be at least 18 years of age.

A sharp contrast to teenager Collier was veteran Larry Cummings, the St. Louis Super Stock winner. Cummings, 69, has been racing for more than a half-century. Cummings' two sons, Britt and Slate, are both multitime national event winners, and his grandson, Cole, 22, also appears to be on the fast track to success in Super Comp. Incredibly, Larry had not won an NHRA national event until he defeated two-time national champ Keith Lynch, also a veteran at age 69.

Collier may be young, but like most Jr. Dragster grads, he has plenty of experience. He moved up to “big cars” more than a year ago and has competed at 16 Lucas Oil Series events and the 2015 JEGS NHRA Cajun SPORTSnationals in Belle Rose, La. At 17, Collier earned a runner-up finish at the Division 5 event at Heartland Park Topeka last season. 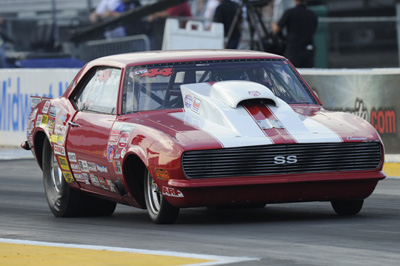 In his “big show” debut in St. Louis, Collier was impressive. He opened eliminations with a tremendous performance that included a .005 light and a 9.906, and he carried that momentum to the final round, where he stopped one of the toughest opponents in the field, reigning national champion Jacob Elrod. The final round was a barnburner, with Elrod a thousandth of a second ahead at the start (.007 to .008) and Collier ahead at the finish line by .014-second, winning by a 9.910 to 9.925 count.

“It’s rough out here; every round is tough,” said Collier. “You only get so many gimmes. Going into the final, all I could think about was ‘Turn on the win light.’ Nothing else. This was a great way to celebrate a birthday.”

The Cummings family usually brings a fleet of race cars to most events, and the St. Louis race was no exception. The Moser Engineering-backed team had six cars in action, but by Sunday’s semifinal rounds, the last driver left standing was Larry in his SS/BM Chevy Cavalier.

“I was 18 51 years ago, and I’m 69 now,” said Cummings as he congratulated Super Gas champ Collier. “This is my first final round, and I won it. I have to thank all my kids for coaching me all the way. I’ve been doing this for 53 years, and it means everything to me.” 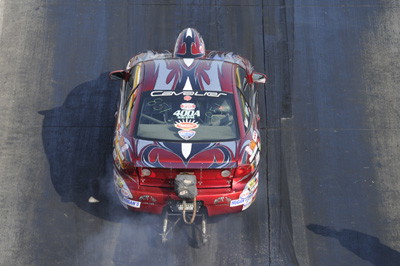 Cummings worked his way through a tough ladder that included races against national champions Jeff Taylor and Anthony Bertozzi. He also had to face his son Slate in the second round in a battle decided via a red-light start. In the first final round of his career, Cummings faced Lynch, another multitime national champ, and he fulfilled his lifelong goal of an NHRA national event win with a flawless performance that included a .005 light and an 8.538 on his 8.52 dial.

“I just about passed out when I saw the [win] light come on down there,” Cummings laughed. “I just about started to hyperventilate. All weekend, my car was absolutely perfect; it ran the numbers every time. This is a big accomplishment for me.”

One of the other big winners from the St. Louis race was Matt Driskell, who scored in the Top Dragster presented by Racing RVs category. Driskell, the 1996 NHRA Super Comp national champion, claimed his seventh national event victory when he stopped Jeff Strickland in the final round. Driskell was nearly flawless with a .014 light and a 6.322 on his 6.32 dial. Strickland was not far behind with a competitive .027 light and a 6.421 on his 6.42 dial. Driskell is now in second place in the Top Dragster standings, just one point behind leader Steven Furr. Strickland is ranked fifth, although his runner-up finish in St. Louis and a runner-up a week earlier in Charlotte do not count for points.

“Last year, I lost the championship by a few points,” said Driskell, who finished second to Marco Abruzzi by just 23 points. “This puts me a little closer to the top again. This car has been very good. I recently made the switch from nitrous oxide to a ProCharger, and this is the second race on it. A lot of people said the ProChargers weren’t consistent, but I beg to differ.”

Driskell has an excellent chance to win his second national championship because he can still earn points in Dallas, the final national event that features the Top Dragster class, and at two more Lucas Oil Series events. He will be bettering a pair of round-two finishes on the divisional level.

Points update: Following up on last week’s edition of The Sports Report, Doug Doll Jr. has indeed clinched the 2016 Lucas Oil national championship in Comp eliminator. Doll didn’t compete at the St. Louis event, but he locked up the title when Division 6 racer Brian Hyerstay, the only driver still mathematically in the running to catch him, went 0-for-2 at the Division 7 Lucas Oil Series doubleheader at Rocky Mountain Raceways.

Though the championships are not mathematically clinched, there is also a strong chance that Jimmy DeFrank will win his fifth title in Super Stock and Mia Tedesco will become the first female Super Gas national champion. With three wins and two runner-up finishes, DeFrank has a monster score of 660 points in Super Stock. Tedesco, who is also ranked in the top 10 in Top Alcohol Dragster, has 654 points in Super Gas. Her closest rivals, Jackson Collier and Mike Sawyer, are both 84 points behind with just four national events and four Lucas Oil Series races left this season.