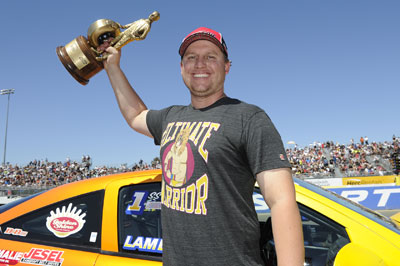 The big No. 1 that adorns the sides of Justin Lamb’s Chevy Cobalt Super Stock car wasn’t put there by accident. The single digit identifies Lamb as the reigning national champion in the class, and after a memorable 2015 season, Lamb has continued his winning ways. In addition to being the national champion, Lamb was the 2015 winner of the Toyota NHRA Sonoma Nationals, and he managed to successfully defend his title, but it wasn’t easy.

Lamb found himself in early trouble when he gave up a sizable starting-line advantage against Jim Rau in the second round, but he rallied to win with a perfect 8.555 on his 8.55 dial. Lamb also survived a close call in his third-round battle versus multitime Division 6 champ Jody Lang, who got off to a great start with a .007 light but missed his dial by eighth-hundredths.

Lamb won his fourth Sonoma final round in an unexpected manner after four-time Super Stock champ and current points contender Jimmy DeFrank red-lighted by seven-thousandths in the final.

“I didn’t expect to see a red-light,” said Lamb. “I figure the chances of Jimmy doing that are about 1,000 to 1. He just doesn’t do that. I had made kind of a poor run in the semi’s, and I was counting on a really tough race, and it would have been if we both had green lights. It was lucky for me that he went red. 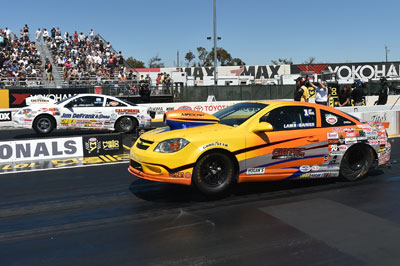 “I don’t take these wins for granted,” said Lamb, who has won 16 times in 22 final rounds. “It gets harder and harder every week. In Denver, I got to the semi’s and got beat by [Dan] Fletcher. Then I come here, and I have to run Jimmy in the final, and he’s one of the best Super Stock drivers of all time. It just means it’s that much more exciting when you win.”

For DeFrank, the news wasn’t all bad. Although he lost in the final round, DeFrank added 94 points to his total, and he is the leader in the battle for the national championship. So far in 2016, DeFrank has competed at four national events, and he has a win, a runner-up, and a quarterfinal finish on his tally sheet. At NHRA Lucas Oil Drag Racing Series events, DeFrank has also been impressive. In five appearances, he has a win, a runner-up, and a semifinal finish. It’s far too early to tell if DeFrank can win a fifth national championship this season, but he’s almost certain to be in the mix when the season ends in November.

Stevie Wonder: Whenever the NHRA Lucas Oil Drag Racing Series hosts an event in the Pacific Division, Jimmy DeFrank can almost always be counted on to win some rounds in Super Stock and Stock, and the same can be said for Steve Williams when it comes to the index classes, Super Comp and Super Gas. Williams, who works for K&N Filters, won his 11th national event title since 2003 when he took out Ron Kelly Jr. in a close Super Gas final, 9.91 to 9.94. 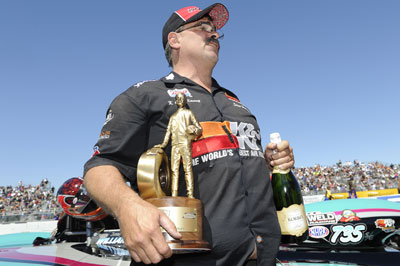 After the final, Williams noted that he not only loves racing at Sonoma Raceway but was also happy to have success in his Super Gas Corvette because his Super Comp dragster had been carrying the load at most events lately.

“It’s pretty hard for me to hide my excitement right now, but I will tell you I love this track, and I love all the Sonoma fans,” said Williams. “I’ve tried for 20 years to win Super Gas here, and I finally won it. With all my responsibilities at K&N, it’s hard to get out and race, but I’ve been to four national events this year, and I’ve been to the final of all four of them. I’m also happy to win here in Sonoma, especially because Toyota is sponsoring this event, and they are a technology partner with K&N. My family is here, so that makes this a perfect day for me.”

Near miss: In Denver, Peter Biondo took a shot at winning a Top Dragster title and came up short with a semifinal showing. The seven-time national champ tried again in Sonoma and reached the final round before a -.001 red-light cost him a shot for the win against Steve Casner. A Top Dragster win is at the top of Biondo’s to-do list because it will give him NHRA national event wins in seven classes, a feat that has only been accomplished by Jeg Coughlin Jr. Biondo has already won in Comp, Super Stock, Stock, Super Comp, Super Gas, and Super Street. As a side note, Biondo was driving the same car that his buddy and business partner Kyle Seipel drove to a victory at the 2015 Sonoma event.

In case you missed it: Last weekend, Nick Folk pulled off an extremely rare feat when he doubled up with back-to-back Super Comp wins at the Division 5 NHRA Lucas Oil Drag Racing Series doubleheader weekend at Heartland Park Topeka. While Lucas Oil Series doubles are indeed impressive, they are not that uncommon. In fact, Sportsman Motorcycle racer Beau Drexler also doubled in Topeka. What made Folk’s achievement so memorable was the fact that more than 128 Super Comp cars were in Topeka, which means that Folk had to win eight rounds in each event.

As a veteran of many big-money bracket races, Folk is used to fast-paced events, and he also frequently races two cars at most events, so it’s probably not the first time he has competed in 16 eliminations rounds in a two-day period. To put an exclamation point on a memorable weekend, Folk won his second title with a perfect .000 reaction time against Doug Wegner, who broke out.

Looking at the bigger picture, Folk banked 115 points for each win (230 total) and is now a serious contender for the national championship in Super Comp. Folk admittedly has some work to do to catch current leader Austin Williams, but in addition to his two Topeka wins, he earned a runner-up finish at the JEGS NHRA SPORTSnationals, so he’s maintaining a very strong average. Folk has only attended three national events and four Lucas Oil Series races, so he also has plenty of opportunities to improve his score.