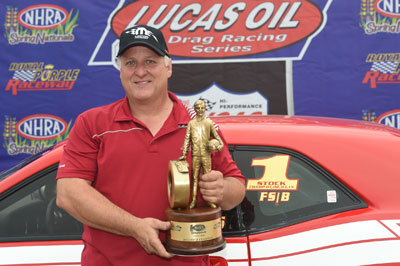 Some stories practically write themselves, and when reigning Stock national champion Kevin Helms arrived in Houston for the NHRA SpringNationals, it was almost a given that he was going to leave Royal Purple Raceway with a Wally. Nobody wins four national championships without being motivated, but Helms had a lot of extra incentive to perform in Houston following the recent passing of his longtime friend and team owner, Division 4 Hall of Famer Joe Teuton.

A beloved and influential figure in the NHRA South Central division for more than a half-century, “Big Joe” Teuton and his younger brother, Jeff, are best known as the proprietors of Southland Dodge, the Houma, La., car dealership, which provides a base of operations for a fleet of Mopar-powered Super Stock and Stock cars. Helms’ first three national championships came behind the wheel of his ’69 Chevy Camaro, but last year, he claimed title No. 4 in the Southland team’s bright-red Drag Pak Challenger.

“Truthfully, I didn’t even want to come to the races this weekend,” said Helms. “All of our team drivers pulled out earlier in the week, and I was going to do the same. I was talking to Jeff, and I told him that I was completely fine with it if he wanted to park the car, but he said, ‘No, that’s your call. You can do whatever you think you need to do.’ I sort of figured that the best way to honor Joe was to go out and try and win a race, so we came to Houston. 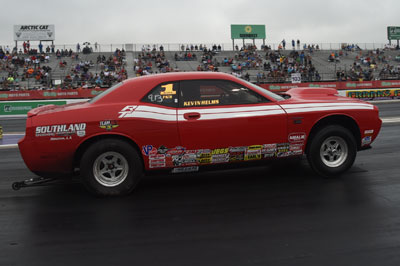 “ 'Big Joe' hired me after my stint in Belle Rose [La., as a track manager at No Problem Raceway Park],” Helms said. “I drove and worked on his Hemi cars for two years. Both Joe and Jeff Teuton and their families have treated me like one of their own. We had Joe’s memorial service on Thursday, and there were more than 3,000 people at the church, then I had to rush to get to the track. I’m pretty sure I was the last driver to go through registration.”

By late Saturday night, the Super Stock and Stock fields in Houston had been whittled to the semifinals, and Helms was still in contention for both titles. At that point, he was still cautiously optimistic that he’d be able to fulfill his mission by winning in one, if not both, classes.

“On Saturday, we really had to hustle,” said Helms. “I was still on the scales weighing my Stocker and they were sending Super Stock cars down the track, so it was hectic, but it felt good to have both cars still in on Sunday. We had small fields in Houston, but pretty much everyone there was really good.”

Helms suffered a tough loss in Super Stock when he missed the Tree and broke out against semifinal opponent Jacob Pitt, but he quickly regrouped and won the Stock crown over Jerry Emmons with an almost perfect 9.136 on his 9.13 dial.

“I think I had some help in the final: 'Big Joe' was with me,” said Helms. “I felt like I was on a breakout run, so I knew I had to hit the brakes. I was about to get on the pedal when the engine just shut off. That was such a distraction. I didn’t know if the engine blew up or what happened. I think I probably hit the brakes after the finish line, but I did happen to see my win light come on. It turns out that the bracket for the crank trigger [ignition] broke. Can you imagine that? The bracket broke at precisely the right time, and I ran right on the dial-in. I’d have to think that was 'Big Joe' up there saying, ‘Hey, you’re going too fast. Let me help you out a little.’ There’s no other way for me to explain what happened.”

Helms not only dedicated the win to the memory of Joe Teuton but also to Jeff Teuton, who is still recovering from injuries suffered in a highway accident while towing back from the Amalie Motor Oil NHRA Gatornationals in March.

“It’s been a tough year for our team, but we keep moving on,” said Helms. “At some point, you just have to say, no mas. Hopefully, this is a sign that things are beginning to turn around.” 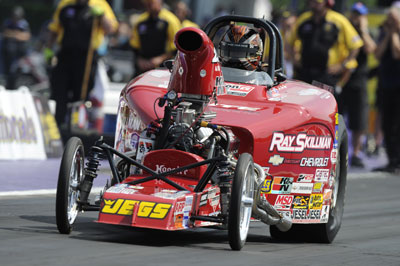 Numbers game: Houston Stock champ Helms has now won 24 national event titles, and Super Stock winner Tommy Phillips collected his 35th NHRA national event Wally, which puts him in a tie with Top Fuel legend “Big Daddy” Don Garlits. By almost any measuring stick, Helms and Phillips are two of NHRA’s most successful Sportsman drivers, but their combined total of 59 wins still falls well short of the gaudy numbers put up by Comp winner David Rampy, who now has 91 wins to his credit.

A week after winning in Charlotte, Rampy scored again in Houston. Even a nearly perfect .001 reaction time by final-round opponent Dick Maris wasn’t enough to deny the touring Pro. Incredibly, Rampy has been able to win at least one national event in 26 of the last 28 years dating back to 1989. The only years he went winless were 1993 and 2013. Although Rampy does not often pursue the NHRA Lucas Oil Drag Racing Series championships, he is the current points leader in both Comp and Super Stock.

Run of the event: These days it’s rare for anything other than a new Cobra Jet Mustang, COPO Camaro, or Drag Pak Challenger to qualify No. 1 in a Stock field, but J. Allen Sherman isn’t afraid to challenge the new generation factory cars with his trusty B/SA ’00 Corvette. Sherman, who builds some of the sport’s most competitive Stock engines, showed off his handiwork with a (-1.063) 10.187 that was good for the top spot in the 44-car field. The next four cars on the sheets were new Factory Showdown cars.

Race of the event: Jay Bunce and William Swann put on a show for the fans in Houston and those watching on the NHRA All Access live stream when they tangled in the second round of Super Comp. Bunce, of Piedmont, Okla., left with a .015 reaction time and recorded an 8.906. Bunce’s .021-second package would win almost any Super Comp race, but it wasn’t nearly enough to get past William Swann, who was almost perfect on both ends of the track with a .008 light and an 8.907.

In case you missed it: In addition to the NHRA SpringNationals in Houston, there were three other Lucas Oil Series regional and divisional events held last weekend. Arguably the best performance of the weekend went to Steve Furr, who doubled up at the Division 1 event at Virginia Motorsports Park when he bagged both the Top Dragster and Super Gas titles. So how did Furr and his wife, Denise, celebrate the rare feat? They hopped on a plane and headed to Puerto Rico for a little R&R.