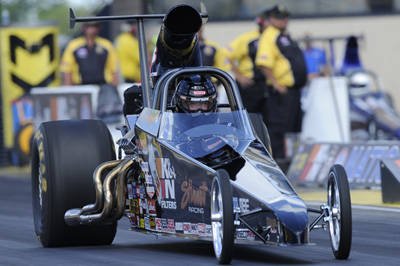 “The best teams always seem to find a way to rise to the occasion, especially when the spotlight is the brightest.”  Those words come from Top Fuel racer Tony Schumacher, who won the Chevrolet Performance U.S. Nationals for the 10th time when he defeated Steve Torrence in the final round. That could just as easily been uttered by any one of the Lucas Oil Sportsman champs at Indy, particularly Super Comp winner Gary Stinnett and Super Gas champ Tommy Phillips.

Anyone who follows Sportsman drag racing should be quite familiar with Stinnett and Phillips. Stinnett is a four-time national champion in the Super Comp class, and he’s also one of the sport’s most accomplished engine builders and tuners. A former employee of Pro Stock legend Warren Johnson and past Comp champ Norwin Palmer, Stinnett won his 24th national event title and second at Indy when Greg Kamplain fouled in the final. Kamplain was attempting to win back-to-back Indy titles after claiming the Comp title last season.

Stinnett isn’t overly superstitious but he had to feel good about his chances early in the event. During Friday’s opening round of eliminations, he recorded a perfect 8.900 pass to claim the No. 1 qualifying spot on the ladder, which meant a bye run in round two. Stinnett survived an extremely close [.003 margin of victory] race against current Stock points leader Jeff Strickland in the fourth round and later used runs of 8.906 and 8.904 to stop West Coast hitter Steve Williams and chassis builder Ray Miller Jr., respectively.

Stinnett’s first Indy title came in 2004, and the Super Comp class has changed a lot since then. The availability of data, improvements in race car design and construction, and an influx of talented young drivers have made for some of the toughest racing imaginable, but year after year Stinnett is able to hang tough. Although he is mathematically out of the running for a fifth national championship in the 8.90 class, Stinnett does have a shot at a top-10 finish following his latest victory.

Unlike Stinnett, Phillips has yet to win a national championship, but that may be the only thing missing from his résumé. Following his final-round win over Ray Miller III, Phillips now has 37 national event titles to his credit, including three this season. He won the Brainerd event two weeks ago, and earlier this season, he bagged his first win in Super Stock. Like Stinnett, Phillips is also a former Indy champ, having won the Super Comp title in 2012.

Driving his new CBS ArcSafe Corvette roadster, Phillips survived a tough battle in round three when Bob Locke cut a perfect .000 reaction time against him. Phillips also defeated Michelle Furr, Alan Bush, and Jason Lynch to reach the final round. Phillips surrendered a .01-second lead to Miller in the final but roared back to win with a 9.97 after Miller slowed.

Phillips has only raced in two national events in Super Gas this season, and he’s won both of them. On the divisional level, he’s attended three races with a fourth round to his credit. It’s not too late for Phillips to pursue the national championship, but in order to get his full allotment of events in, he’d have to attend most of the remaining Lucas Oil Series divisional events. Regardless of whether he chooses to pursue a title, Phillips can’t be too disappointed with his current three-win season and a second U.S. Nationals title.

Indy Comp champ Kevin Self won for the third time in his career when he defeated three-time Indy champ Jason Coan in a final round that featured a six-cylinder vs. four-cylinder battle.

By the time Coan and Self reached the final round of the 52-car field, they had both been hit hard by the Competition Index Control system. Self had lost .19-hundredths to CIC penalties while Coan was down .22-hundredths. In a class where drivers are sometimes maligned for their reaction times, the Indy finalists were both extremely competitive. Self left with a .017 bulb, and Coan was nearly perfect with a .001 light. At the stripe, Self’s F/EA was ahead by nearly a tenth and lit the win light with a 7.79, a run nearly seven-tenths under his original index. 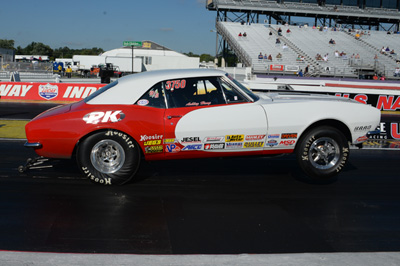 There were more than 300 entries in Super Stock and Stock, but by Monday afternoon, just two drivers, Ryan Haag and Jeff Lopez, were left standing. Haag, the son of longtime Division 3 racer David Haag and a former Jr. Dragster champion, was appearing in his first national event final. Lopez, who is also a second-generation racer, previously won four national event titles, but all of them had come in heads-up classes and none at Indy.

Haag made his way through the tough 128-car Super Stock field to meet Division 6 racer Sean Cour in the final. Haag was almost perfect at the start with a .006 light and cruised to the victory with a 9.821 on his 9.31 prediction. Cour couldn’t match Haag’s reaction time and crossed the finish line second, even though he ran right on his dial with a 9.497.

For the second straight year, a COPO Camaro won the Stock title after Lopez drove his new-era Chevy to a final-round win over Charley Downing’s Cobra Jet Mustang. After an even start, Lopez crossed the stripe first by .009-second with a 9.395 on his 9.36 dial. Downing followed with a 10.383 on his 10.34 dial.