The trouble with doubles 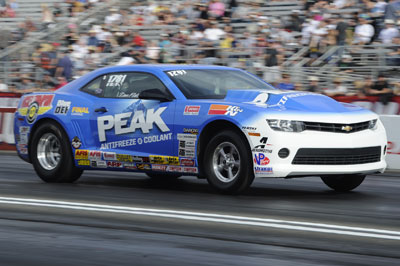 Winning one national event is a major achievement for just about any NHRA Lucas Oil Drag Racing Series Sportsman driver and winning two in the same weekend remains a goal that is achieved by only a select few. That point was reaffirmed during the season-opening Circle K NHRA Winternationals in Pomona, where Dan Fletcher and Robert Naber both made it to two final rounds, but neither one of them was able to run the table. Fletcher finished with a win in Stock (his 95th career win) and a runner-up in Comp, and Naber collected career win No. 4 in Super Gas and was a runner-up in Super Comp.

Fletcher is certainly no stranger to the concept of a double victory. In fact, there is probably no one who understands the degree of difficulty involved in the feat. The Pomona event marked the 11th time in his career that Fletcher has had a chance to double yet he’s only finished the job once when he won the Super Stock and Stock titles at the 2013 Seattle race. Luckily for Fletcher, he has also not had to deal with the bitter disappointment of losing two finals, either.

“It’s crazy to think that this is the 11th time I’ve had a chance to double, but I’ve only been able to finish the job once,” said Fletcher. “I guess that it’s harder than it looks because I really can’t explain it. On one hand, you made it to two final rounds so you’re on a roll that day, but at the same time, both of your opponents got to the final as well so they must not suck, either.”

In Stock, Fletcher was consistent if not spectacular with a string of conservative reaction times and some smart finish-line driving behind the wheel of his Peak-backed COPO Camaro. He drove to national event win No. 95 with a final-round win over 1999 Stock champ Don Little, who broke out by a thousandth of a second. 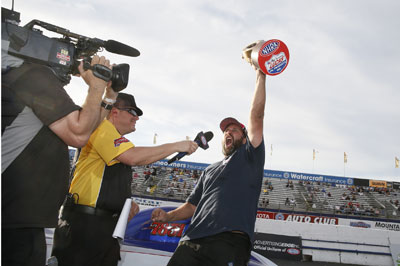 In Comp, Fletcher was one of just 15 drivers to make the first round in Pomona, but his chances for a victory suffered a hit when he incurred a big Competition Index Control penalty in round one by driving Rick Braun’s Cobalt to an 8.077 (-.623) in his round-one win over Scott Hedlund. Fletcher somehow managed to reached the final, but his 8.027 best (-.553) fell to Doug Lambeck’s (-.574) 8.406. Adding insult to injury, Fletcher’s loss was accompanied by a .02-second permanent index reduction.

“This race was a bit different than most of the other times I’ve had a chance to double,” Fletcher said. “I really had no business being in the Comp final. I lost .12-hundredths in the first round, so I should have been done after that. I honestly don’t care that I lost the Comp final, but I hated to take two-hundredths [permanent index reduction] in the final. That will bother me for a long time. One Sunday night, I should have been the happiest guy in Pomona because I’d just opened up with a win and a runner-up, but I was miserable because the last run I made down the track was a big mistake.”

Naber, above, attempting his first double, competed in the Super Comp final first but lost to Steve Williams via a close double breakout. A few minutes later, Naber had a chance for redemption and didn’t let it go to waste with a nearly perfect 9.901 in the Super Gas final after Mike Wiblishouser red-lighted. All told, Naber competed in 12 eliminations rounds and won 11 of them to start the season.

There have so far been 19 drivers who have combined to produce 32 national event doubles, but there are many more drivers, including Fletcher and Naber, who have come up short. Their plight only helps to illustrate just how difficult it is to win two classes at the same event. The fact remains that more often than not, a driver in two finals is likely to take a win and a loss, or on a handful of occasions, two losses.

“One would think that after you’ve won 10 or 11 straight rounds in two cars that it wouldn’t be that hard to win a couple more, but it is,” Fletcher noted. “It’s a good question, but I really have no idea why so many potential doubles end up in splits. I guess I’m just grateful that I haven’t lost both finals. I wouldn’t enjoy that.” 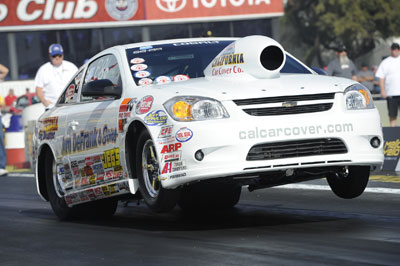 Home Court Advantage: The dragstrip at Auto Club Raceway at Pomona is named Parker Avenue in memory of longtime Pomona Police Chief Ralph Parker, who was instrumental in the development of the facility. The pit-side return road is also named Wally Parks Boulevard in honor of the late NHRA founder. Years from now, it’s not too difficult to imagine that there might also be a “DeFrank Drive” on the Fairplex property in honor of Jimmy DeFrank. The four-time Super Stock national champion has a record of success in Pomona that is unrivaled.

With his most recent win at the 2016 season opener, nine of DeFrank’s 19 career wins have come in Pomona and 28 of his 46 final rounds. He’s also won the season opener five times, including his memorable Stock/Super Stock double in 2013.

In his most recent win, which came behind the wheel of his California Car Cover Super Stock Cobalt, DeFrank survived a couple of close calls en route to the final round. He landed the Wally after 1996 Phoenix champ Fred Moreno red-lighted in the final. As a side note, in three of his four championship seasons — 1997, 1999, and 2009 — DeFrank had started the season with a final-round finish in Pomona.

Run of the weekend: Super Gas national champion Jimmy Lewis appeared to do everything right in the quarterfinals at the Circle K NHRA Winternationals with a .004 reaction time and an 9.906 in his Sunset Racecraft Corvette. The only problem was that Lewis did not turn on the win light because his opponent, eventual runner-up Mike Wiblishouser, was just as aggressive with a .002 light and a 9.908 and turned on the win light by just .0001-second.

In case you missed it: Sweden’s Jimmy Alund, who became the first European driver to win an NHRA Pro title when he claimed the Pro Stock championship at the 2013 NHRA Four-Wide Nationals, made his Stock debut at this year's Winternationals with an A/S ’68 Nova recently purchased from Clark Holroyd. Alund, who plans to race the car at as many as 10 events this season, qualified No. 4 and red-lighted in round one.