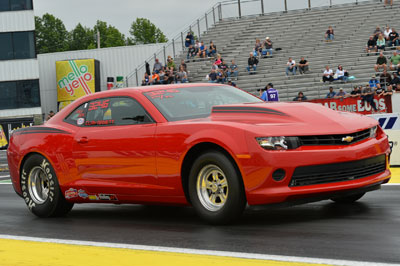 Trying to predict the future usually affords a lesson in frustration, but given the opportunity to look ahead a few years, it’s not unreasonable to think that fans who attend this weekend’s Amalie Motor Oil NHRA Gatornationals will be able to say they were a part of history. There’s no way of knowing if this is the week that the 200-mph Pro Stock Motorcycle barrier will be broken or some other historic milestone achieved, but the 2016 Gators will definitely be remembered as the race where the NHRA Factory Stock Showdown came of age. Some might even argue that the new event, backed by the School of Automotive Machinists & Technology, might just provide a glimpse of a future Pro class.

For a bit of perspective, it pays to take a quick look back at the Factory Stock movement, which began nearly a decade ago when John Calvert debuted the then-new Cobra Jet Mustang with a win in Stock at the 2008 Circle K NHRA Winternationals. Since then, the popularity of factory-built Stock and Super Stock race cars has exploded. The arrival of the Dodge Challenger Drag Pak and Chevrolet COPO Camaro entries gave all three major American automakers a stake in the game, and it quickly became obvious that a special event to showcase the new cars was needed. In 2012, the inaugural Factory Stock Showdown was held in Indy.

The early Factory Stock Showdown races proved to be extremely popular, but due to the large performance disparity between the supercharged and naturally aspirated engines, it was difficult, if not impossible, to fairly handicap the numerous engine and vehicle combinations. As a result, the original Factory Showdown events proved to be a bit confusing, even for the racers. The early events were also run in conjunction with Stock class eliminations, traditionally held Thursday. As a result, many fans never got the opportunity to see the popular new Detroit hot rods. 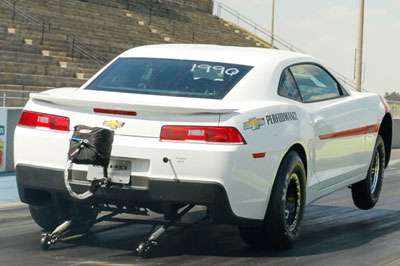 Fast-forward to 2016 and the arrival of the School of Automotive Machinists & Technology NHRA Factory Stock Showdown. The event features a revised format in which the quickest eight qualifiers, regardless of brand or engine combination, will advance from Stock eliminator to the Factory Stock Showdown main event. Those eight qualifiers will race heads-up for the title. More important, final eliminations are scheduled to take place Saturday and Sunday, prime-time hours that will allow fans to enjoy the battle between low-eight-second, 165-mph modern muscle cars.

The new format represents a radical departure from previous Showdown races, and many drivers, including veteran driver and engine builder David Barton, believe it sets the stage for growth of factory muscle car racing. Barton, a past Showdown winner with his naturally aspirated Challenger, is set to debut a new supercharged COPO Camaro this weekend as part of a partnership with Gary Wolkwitz.

“Overall, I’m really excited about this deal,” said Barton, who recorded several 8.4-second runs in preseason testing with the new Chevy. “I’m a bit lucky because I’m now racing a [supercharged] car, and that’s obviously going to be the only way to be competitive. I feel a bit bad for the naturally aspirated guys, but the writing has been on the wall for a while. We’ve seen more and more blown cars show up, and that’s part of why we made the switch. Those [supercharged] cars are the future of this deal because they’re faster, louder, and do bigger wheelstands.

“We have supported this [Factory Showdown] deal since the beginning, and we’ve even made two cross-country trips to Las Vegas, so it’s important to us. I believe this is a prototype for what we’re going to see in the future as far as maybe a new Pro category. I don’t consider myself a Pro, but these cars are running low eights at over 160 mph, so they’re not exactly Stockers anymore. At the end of the day, this is going to be an exciting race. We all want to race in front of a crowd, and I think this [new format] will attract some more serious racers.” 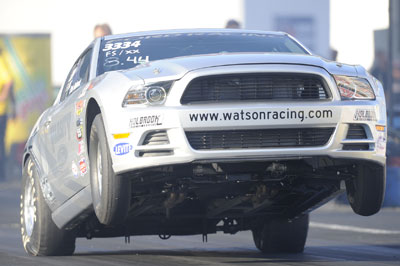 Most racers are inclined to agree with Barton’s assessment that the supercharged cars will have the upper hand under the new Factory Stock format. The good news is that all three manufacturers now offer what should be a competitive package. The Cobra Jet and COPO entries are already proven winners. Cobra Jet driver and former Showdown champion Chris Holbrook has run in the low 8.3s with his Watson Racing entry, and Clay Arnett has recorded similar 8.3-second elapsed times at more than 165 mph with his supercharged COPO Camaros. Both drivers are expected to be among the favorites to win the Gainesville race.

The supercharged Dodge Drag Pak engine combination is all new for 2016, but it is rumored to have great potential. Division 1 racer Jonathan Allegrucci is expected to debut the first blown Dodge in Gainesville. Allegrucci’s engine was built by Barton, who is convinced that the continued growth of the Factory Stock Showdown is good for business.

“From a business perspective, this is very good for us,” Barton said. “That’s one of the reasons why we built a GM car. I wanted to show everyone that we can do more than just build Mopar engines. We worked on the new Challenger, and we’ve also spent a lot of time with this new COPO Camaro, and the two engines are very close in terms of power. After years of building Super Stock Hemis, this is a new challenge, but it’s one that we’re enjoying.” 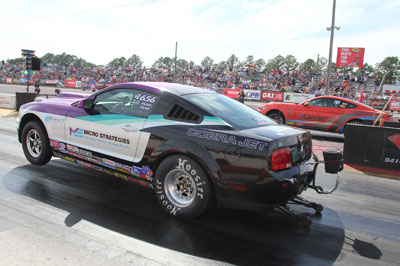 Two-time national event winner Ken Miele is another longtime Stock racer who is bullish on the future of the Factory Stock Showdown. Racing as part of Anthony Bongiovanni’s multicar Micro Strategies team, Miele admits that he’s fighting an uphill battle with his 2008 model Cobra Jet, but he’s prepared to take his best shot in Gainesville.

“My car is now eight years old, and a lot has changed as far as technology,” said Miele. “I might be able to make the Quick 8 and I might not, but I am going to enter [Factory Stock] because I want to support the program. I think I can run in the low 8.6s, and that might be enough to make the top eight. I think that there are a lot of guys out there who have been waiting for this. They’ve been waiting to see what direction the class is going to go, and they have the resources to jump in and be competitive. Now that there is a new format, you might see more and more cars come out. This isn’t cheap to do, but you’re talking about the best of the best here. It doesn’t take anything away from traditional Stock eliminator racing. You can still do that on a reasonable budget.”

Looking back at the brief history of the Factory Stock Showdown races, it isn’t hard to make comparisons to the original muscle car wars of the 1960s, when the factories turned out some of the most powerful street cars of the day. During that time period, the auto manufacturers were heavily invested in drag racing and used the sport as an integral part of their marketing and product-development strategies. The original factory Stock cars ultimately morphed into the class that we now know as Pro Stock, which begs the question, “Is the current Factory Stock Showdown the prologue to Pro Stock 2.0?”

“I’d like to think that’s the direction we’re headed,” said Miele. “Fans do love these cars because they can relate to them. How many new Camaros, Challengers, and Mustangs do you see on the street? There are thousands of them out there, and as far as new cars go, they are relatively affordable. With the exposure this [Factory Showdown] should get this weekend with all the fans in the stands and hopefully some television coverage, there’s no telling where this deal could end up. It’s obviously a big thing for each of the auto manufacturers, so I’m sure they’d like to see it continue to grow. I’m just really happy to be a part of it.”