The rarest double of them all 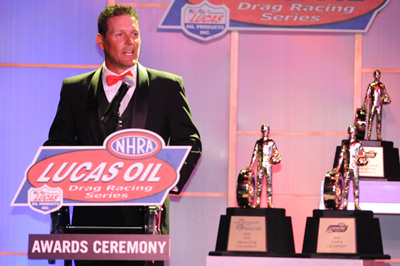 Other than the final round of the Auto Club NHRA Finals, where he lost to Bob Gullett’s nearly perfect run, there likely isn’t much that Jeff Strickland would have changed about the 2016 season. Strickland opened the year with a historic double in Gainesville, were he won the Stock and Top Dragster titles. Little did Strickland know that nine months later, he would be crowned the NHRA Lucas Oil Drag Racing Series champion in both classes.

Strickland is just the second racer to win two national championships in a single season, joining Scotty Richardson, who claimed the Super Comp and Super Gas titles in 1994. Winning one title is difficult enough for most racers, but to win two in a single season is a feat for the ages, and Strickland fully understands the magnitude of that achievement.

“I can’t put it into words what this means; I’m kind of speechless,” said Strickland. “I know this means a lot of things to a lot of people, but for me, I’m just a racer who is trying to turn on win lights. I don’t look at the glamour and the glory. I just do my job. To be honest, I dread having to give a speech [at the Lucas Oil Series championship banquet] more than I dread staging either of those two race cars.”

Strickland clinched the Top Dragster title just more than a week ago in Las Vegas with a virtuoso performance that included his third win of the season in the fast bracket class. Before sealing the title with a victory, he had to get past his closest rival, Matt Driskell. Strickland used a .007 light to help defeat Driskell in the fourth round to officially lock up the title. Strickland hadn’t initially planned on making the trip to Las Vegas from his home in Alabama, but he thought that he had to to maximize his chances of winning the title.

“When we took a look at it, we realized that we had to go,” he said. “The Las Vegas race is six rounds, and everyone is there. I also had to go to the SEMA Show for the debut of the new COPO Camaro, so it worked out well. I’ve been on the road for three weeks, so you can imagine all the texts and phone calls I’ve gotten from home. I live in a small town [Red Bay, Ala.] of about 4,000 people, and everyone knows everyone. Some of them have gotten carried away like they want to name a street after me. That’s definitely not my style.

“I will say the pressure of the Top Dragster championship was the worst,” Strickland said. “Driskell had been hot. He was winning every race he went to. When I saw that I had to run him, I knew I had to be .00 on the Tree just to have a chance. When we staged, I tried to block everything out. I never even looked around to see what was happening on the starting line. It was a big relief to get that one out of the way.” 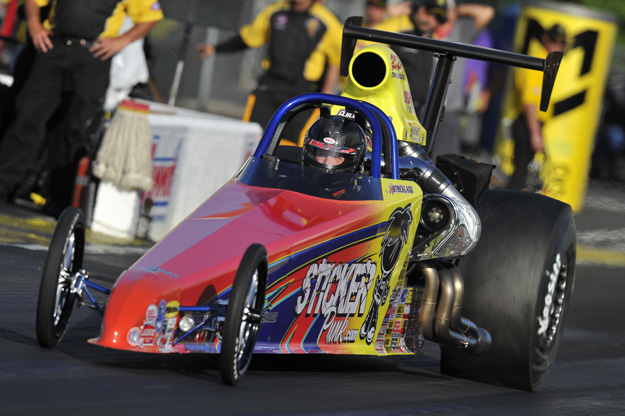 With the Top Dragster title safely secured, Strickland had little time to relax before turning his attention to the Stock championship. Arguably, the Stock title is the more important of the two because Strickland drives a COPO Camaro for the Gray Motorsports team, and he has the backing of a large contingent of officials from General Motors who support the COPO program. The importance of winning a national championship in one of the factory race cars can’t be understated.

Heading into the final event of the season, the Auto Club NHRA Finals in Pomona, Strickland’s only challenger was two-time champ Brad Burton, who needed to reach the semifinals to take the title. Strickland tried to qualify in a spot where he could race Burton early, and though his plan wasn’t perfect, he got the matchup he had been looking for in round three. In perhaps the biggest round of his life, Strickland got away first, .017 to .029, and held on for the win when he drove the Gray Motorsports COPO Camaro to a 9.393 on his 9.39 dial. For his part, Burton was also sharp with a 10.646 on his 10.64 dial but came up .015-second short at the finish line.

“I usually don’t play the ladder game, but that time, it worked out the way it was supposed to,” said Strickland. “Like I said, I’m just a racer who tries to do the best job I can anytime I get in a car, but I know what this [Stock] championship means to the folks from GM and Gray Motorsports. They showed a little faith and took a chance on this Alabama guy to drive their car. I have to wonder how many times something like that works out like this. I’m just happy that I was able to deliver a championship for them.

“To be honest, I don’t think I’d change a thing about this season except for maybe the Stock final in Pomona,” said Strickland. “He [Bob Gullett] did a great job, but that was rude. I didn’t even have a chance to win. Seriously, I never thought I’d be in a spot to win even one championship, much less two. I am truly blessed.” 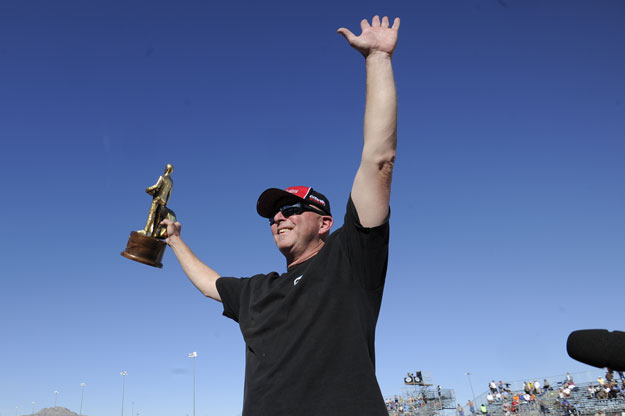 One more to go: In an interview in February, Dan Fletcher said that he would be upset if he didn’t get to the 100-win mark during the 2016 season. Though he came up one win short, it would be hard for even Fletcher to complain about a year that included five national event titles in four categories.

Fletcher bookended his season with a pair of Stock wins in Pomona, one at the season-opening Circle K NHRA Winternationals and a second at last weekend’s Auto Club NHRA Finals. Between, the touring pro won races in Super Stock, Super Comp, and Super Street. It was the first time that he had won national events in Super Comp and Super Street, fulfilling a pair of longtime goals.

“As my friend 'Pirate' [Gary Tackett] pointed out, it was nice to win the first and last races of the season,” said Fletcher. “That part is pretty awesome. For the last month or so, things have been pretty rugged. I raced in Comp this weekend [in Pomona] and made a mistake when I let my opponent get by me by a few thousandths of a second. Winning [in Stock] is what keeps me from hanging myself when it’s not going my way.”

Fletcher will now head into the 2017 season needing just one more win to join John Force and Frank Manzo as the only NHRA drivers to claim 100 national event victories. Fletcher has stated that he wants to earn win No. 100 in his Super Stock car, an original ’69 Camaro that was purchased new by his late father, Tom. To that end, Fletcher may abandon his long-term practice of racing two cars at each event, although given his success in Pomona and Phoenix, he likely won’t have to wait long to celebrate his milestone victory.