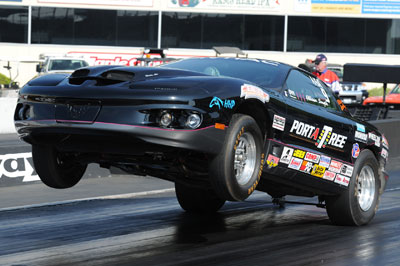 Division 1 Sportsman racers Doug Doll and Allison Smyth have been dating for about a year, and based on their recent results, the relationship has done wonders for their racing careers. At the recent Northeast Division NHRA Lucas Oil Drag Racing Series event in Reading, held over Memorial Day weekend, Doll and Smyth had a rare chance to celebrate in the winner’s circle when he won the Comp title and she followed with a win in Stock. For most racing couples, sharing wins is a once-in-a-lifetime moment that will never be forgotten. For Doll and Smyth, it was just a warm-up for a bigger moment when they duplicated the feat on the NHRA Mello Yello Drag Racing Series national event stage with two more wins just eight days later.

“We are stunned,” said Smyth, whose family operates Portatree, a leading retailer of practice Trees, simulators, weather stations, and other racing-related products. “It’s crazy and unbelievable to win a national event, but to have your boyfriend win at the same time is beyond words. When we race together, I try not to know if he wins or not because I don’t want to upset my routine. This weekend, when Doug ran the Comp final, I was two pairs behind, but I couldn’t see. I asked my brother if he won, and he said, ‘I don’t know.’ I was just really happy to get my first win and have both of us celebrate together.

“I never thought we could win on the same day, and then after we won Reading, I didn’t think it could ever happen again,” said Smyth. “For it to happen two weeks in a row is just too much. It’s not even real.

“Sometimes, we do talk about strategy and how our cars are set up and things like that, but mostly, we just support each other,” said Smyth. “Racing together with Doug just gives me more confidence.” 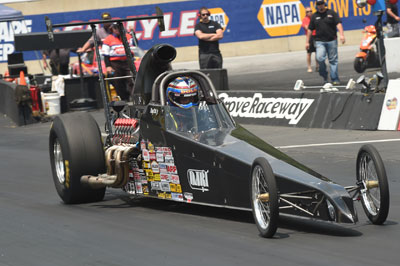 Doll won his first national event on NHRA’s biggest stage in Indy in 1999, when he captured the Super Comp title. He has since won seven national event Wallys, including in Epping, where he scored his second in Comp eliminator. Doll’s E/DA dragster was quick, but he also had to overcome a pair of nearly perfect reaction times by Frank Aragona Jr. and Al Ackerman, both of whom are past national champions. In the final, Doll held off Ackerman by just .009-second.

Smyth earned a top-10 finish in Stock last season in her A/SA Firebird, but she had never appeared in a national event final before the Epping match. Paired with longtime family friend Jerry Hatch, Smyth became NHRA’s 74th female winner with an outstanding performance that included a .006 reaction time and a .006 margin of victory at the stripe.

“I don’t think I was too nervous in the final because it had already been a great day no matter what happened,” said Smyth. “I may have been a bit nervous, but I calmed down once I got in the car. I have known Jerry for a long time; he used to race with my dad, and I gave him a big hug. He’s a tough racer, and he’s got a seriously fast car. I’m glad I don’t run in D/SA because I wouldn’t want to race him heads-up."

The Epping race marked the third time this season and second straight event that a female driver was crowned the Stock champ, following Randi Lyn Shipp’s win in Phoenix and Trista Fenner’s most recent victory in Topeka. Interestingly, Hatch also lost to Shipp in the Phoenix final.

“A couple of weeks ago, I thought this was going to be a tough stretch with three races in a row in Maple Grove, Epping, and Englishtown,” Smyth said. “By now, I would have figured that I was ready for a break, but I can’t wait to get to Englishtown this week. I’m ready to get back in the car.” 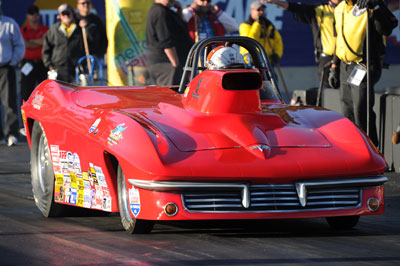 Clash of the titans: By almost any measuring stick, Tom Stalba Jr. and Ray Sawyer are two of the best Super Gas racers in the Northeast Division, if not the entire nation, so it should not have come as a surprise to anyone that they met in the final of the NHRA New England Nationals.

Sawyer, the 2005 Super Gas national champion and defending Epping winner, appeared to be headed to his sixth national event title when he grabbed a .024 to .053 lead against Stalba’s Corvette at the start. Downtrack, Stalba made up for his late light with a nearly perfect run. Coming from behind, Stalba drove around Sawyer’s Camaro to take the win, 9.902 to 9.937. The final margin of victory was just .0062-second, which is not uncommon in NHRA Super-class races.

“I got lucky,” said Stalba. “I had a bad transmission; it almost didn’t hold on the starting line. Thankfully, my car was dialed. That red car is the best race car I’ve ever had. It’s bailed me out more than once. It wasn’t pretty, but I’ll take it.”

While Stalba has yet to earn a national championship, he has won just about everything else, including six Division 1 titles and a host of other big Super-class and E.T. bracket races. Following his latest victory, which came almost a year after his most recent win at the 2015 Englishtown race, Stalba has nine national event Wallys.

Run of the event: Scott Gove had run in the seven-second zone with his SS/AM Dodge Daytona, but the Maine resident had not done it at a national event until he blasted to a 7.905 during qualifying for the Epping event. Gove’s run is more than a second under the 9.00 SS/AM index. For the record, he is part of a seven-second Super Stock club that includes John Gallina, Carey Bales, P.B. Candies, Bill Skillman, Steven Bell, and John Clegg.

Race of the event: Veterans Bill Skillman and Jim Boudreau put on quite a show in the quarterfinals of Stock eliminator. Boudreau got off the starting line with a .003 light and left second to Skillman’s perfect .000. Skillman’s Cobra Jet was the first car across the finish line, but he broke out by a thousandth of a second. Boudreau maintained his nearly perfect pace with a 10.192 on his 10.19 dial.

In case you missed it: In addition to the NHRA New England Nationals, there were four NHRA Lucas Oil Drag Racing Series events across North America last weekend, and the results proved that NHRA’s unofficial Year of the Woman Racer is still going strong. At the Division 2 eighth-mile event at the luxurious new GALOT Motorsports Park, Jenny Treadwell scored her second win of the season in Comp. The Division 3 race at Route 66 Raceway featured wins by Mia Tedesco (Super Gas) and Janette Thornley (Pro Fuel Harley) as well as runner-up finishes by Brina Splingaire (Stock) and Kristina Lawyer (Top Dragster). At SRCA Dragstrip in Division 5, Rachel Smith drove to the final of Super Street, and north of the border at Mission Raceway in Canada, Francesca Giroux earned the title in Top Dragster.