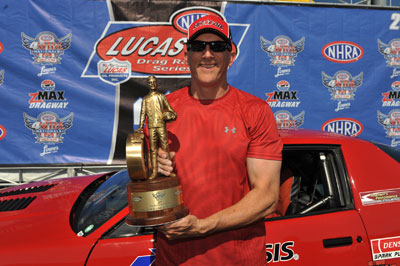 Bryan Worner loves it when a plan comes together. With the initial field of 65 Super Stock racers whittled to just three late Sunday afternoon in Charlotte, Worner pulled into the zMAX Dragway staging lanes and was greeted by two familiar faces. In the semifinals, Worner was paired with his twin brother, Byron, and the winner of that heat faced a final-round match against Herbie Null, a longtime friend and traveling companion.

“Other than maybe racing my brother in the final, this was as good as it gets,” said Worner, shortly after he defeated Null to win his fifth NHRA national event title. "The three of us travel together, and we have a lot of fun. There are actually about eight of us that make up the Division 1 Wolfpack. We all share a lot of information, and that helps make all of us better racers.”

The final was decided when Worner gained an early lead and Null broke out at the finish line. The semifinal battle between Bryan and Byron proved to be one of the best rounds of the day. In a close double breakout, in which both drivers were under their dial-ins by three-thousandths, Bryan prevailed. It wasn’t the first time that the Worner twins have had to race each other in the late rounds. They also met in the final of last year’s NHRA Keystone Nationals in Reading, which was won by Byron, who is the oldest by three minutes. 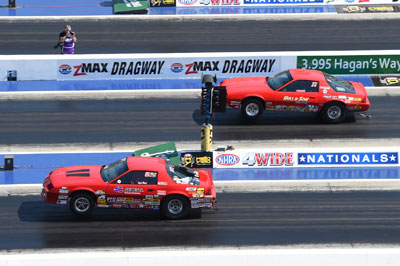 “When I raced my brother last year in the final in Reading, we accomplished the biggest goal we’d ever had in racing,” said Bryan. “We wanted to run in a final for a long time, but this was almost as good.”

zMAX Dragway, commonly known as "the Bellagio of dragstrips," is one of the most luxurious tracks on the NHRA tour, but that’s not why Worner calls it his favorite track. Amazingly, Worner has scored four of his five national event wins in Charlotte; the other three were at the fall event in 2008 and 2013-14. He was also a runner-up at the 2012 four-wide race. All told, 15 NHRA national events have been held at zMAX Dragway since it was built in 2008, and Worner has raced in the final round of five of them.

“Up until now, I feel like I’ve been jinxed at the four-wide,” said Worner. “The first year we ran here, I lost by two-thousandths of a second in the semifinals. I just never had as much luck here as I have had in the fall race. I definitely love this place, though. It’s obviously my favorite track.” 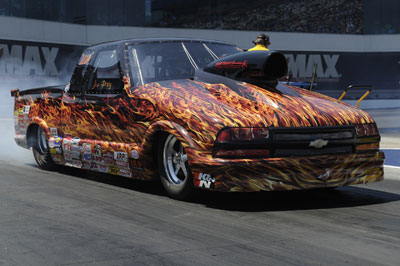 On fire: During his post-race interview, Charlotte Super Gas champ Jim Perry was asked about the unique flamed paint scheme on his Chevy S-10 pickup, and he couldn’t lie about its origin.

“I bought the truck like that,” Perry admitted. “I actually thought about changing it, but everyone seems to like it; I get a lot of questions about it, so I think I’ll keep it.”

Based on his recent success, Perry shouldn’t be changing paint designs or anything else related to his racing program. Not only does his truck look as if it’s on fire, but it also has been red-hot on the racetrack in 2016. Perry, the 2009 Super Comp national champ, is having another memorable season in the 9.90 class. Just a month after winning the Amalie Motor Oil NHRA Gatornationals, he bagged a second national event win at the NHRA Four-Wide Nationals presented by Lowes Foods.

Perry’s driving was very good in Charlotte, but in the final round, his performance bordered on perfection. Perry was .004 on the Tree and finished with a 9.907. He needed to split the atom because opponent Mia Tedesco, the low qualifier in Top Alcohol Dragster, put together a very competitive .019-second package and still finished second by eight-thousandths.

“That round was tough; heck, every round is tough in this class,” said Perry, who was a quarterfinal finisher at the zMAX NHRA Lucas Oil Drag Racing Series event a week earlier and now has the No. 1 ranking in the national standings. “I wish I had done better at a couple of the earlier points meets, but I won’t complain about two national event wins.”

Run of the event: Ray Skillman, grandfather of Pro Stock driver Drew, qualified low in Comp eliminator with a (-.707) 7.563 in his B/Econo Altered ’14 Mustang. Skillman was the only driver to run more than seven-tenths under his index during qualifying and ran quicker than his own 7.57-second NHRA national record, set last October in Las Vegas. 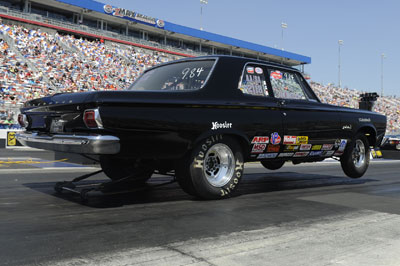 Race of the event: The third round of Stock featured a great heads-up, no-breakout AA/SA class race between former nitro and alcohol racer Jim Bailey (pictured) and Bruce Noland. Bailey, in his clean Hemi-powered ’65 Belvedere, grabbed a huge lead at the start (.076 to .217) against Noland’s equally sanitary ’71 Corvette. The advantage proved to be too much to overcome, and Bailey won by a 9.760 to 9.749 count. It was the second time this year that Bailey and Noland have raced heads-up. They also tangled at the Division 2 NHRA Lucas Oil Drag Racing Series opener in Gainesville with the same result.

In case you missed it: The Lucas Oil classes in Charlotte featured a number of active Pro racers. Pro Stock drivers Bo Butner, Jimmy Alund, and Drew Skillman competed in Stock, and all three were gone after the first round of eliminations. Top Fuel driver Dave Connolly raced his new Chevy Cobalt in Top Sportsman and made it to round two, where he dropped a close race against Jonathan Gibbs.