Not your average Joe 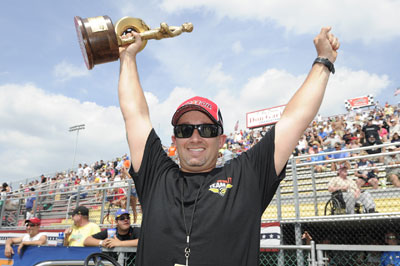 As recently as two weeks ago, Joe Santangelo’s frustration level had reached the point where he was seriously considering taking an extended break from drag racing. Santangelo won the Super Stock title at his home event in Epping for the third straight year, but his luck took a turn for the worse a short time later when he had to withdraw from the NHRA Thunder Valley Nationals at the last minute after his trailer broke on the way to Bristol Dragway.

“It was a real mess,” said Santangelo. “The whole tongue of the trailer almost completely detached on Route 95 in Virginia, so I had to miss Bristol. We had a weldor come up and patch the problem on the highway. I dropped both of my race cars off at a friend’s house nearby to save some weight. Then, on the way to Gold Rush [in Pennsylvania], all of the welds broke, and I had to call another weldor to patch it up again. The whole ordeal probably cost me $5,000. The check trans light came on in my truck, so it wasn't a very fun trip that I couldn’t wait to end.”

As tempting as it may have been to throw in the towel, Santangelo soldiered on and raced at the Summit Racing Equipment NHRA Nationals in Norwalk, an event that he won in 2015 while driving Arnie Martel’s Comp car. This year, Santangelo was racing in Super Stock and Stock, and his perseverance paid off with a win in Stock. Santangelo defeated Craig Marshall in a double-breakout final to claim his 13th victory and his first behind the wheel of good buddy Anthony Bertozzi’s wheelstanding ’69 Camaro. Once again, Santangelo had to face a talent-heavy lineup that included Bo Butner, Kevin Zaskowski, and championship contender Jeff Strickland. 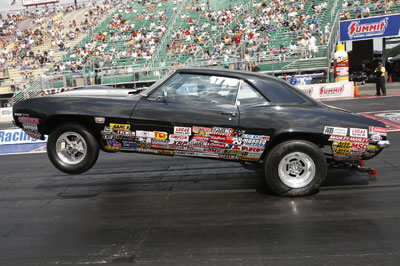 “I haven’t driven Anthony’s Camaro since 2014, but I’ve missed it,” said Santangelo. “This is the same car that I won the championship in in 2011. That year, I drove my own car for most of the season, but we brought this one to Las Vegas at the end of the year, and I won the [Division 7 NHRA Lucas Oil Drag Racing Series event], which clinched the title. This was the first time I’ve won a national event driving for Anthony, and that’s something I’ve wanted to do for a long time. This wasn’t my best driving job, but it was far from my worst.”

The Norwalk win was Santangelo’s first in Stock this season, but he does have a pair of runner-up finishes at Division 2 Lucas Oil Series events in Gainesville and Atlanta, which makes him a contender for the national championship or at least a candidate for a top-10 finish. Santangelo also has a solid season going in Super Stock thanks to his Epping win, but he suffered a setback in Norwalk when he red-lighted by a thousandth of a second in round two.

“I still might take some time off, but I don’t know; sometimes you start to get frustrated, and then you go on a nice little run and win a couple of races,” said Santangelo. “It’s funny how that works. I’m just glad I didn’t take a break before this race.”

Doll’s house: Six months ago, Doug Doll Jr. had no clue that he would be racing in Comp eliminator, but he’s now the hottest driver in the class. Doll forged his reputation as an up-and-coming young hot shot in the Northeast Division after winning the Super Comp title at the 1999 Chevrolet Performance U.S. Nationals. He got a chance to return to Comp this year driving for team owner Charlie Greco, and to suggest that he has made the most of it would be an understatement. In five races behind the wheel of Greco’s straight-six-cylinder-powered dragster, Doll has claimed four wins, including at the national events in Englishtown and Norwalk. Some events have struggled to attract entries in Comp eliminator, but those two races featured very competitive fields. The same could be said for the Division 1 Lucas Oil Series races in Richmond, Va., and Reading, which Doll also won. 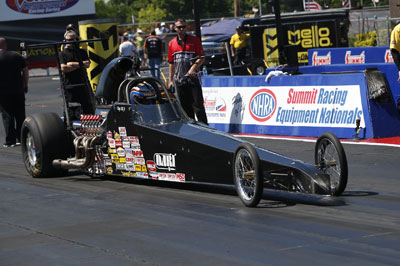 In Norwalk, Doll qualified No. 1 and got a bye run in the first round, which gave him a clean index for his second-round race against Larry Pritchett, who came in at a disadvantage after losing five-hundredths to a CIC penalty. Pritchett took his best shot at Doll with a .006 reaction time, and so did round-three opponent David Rampy, who was just as determined with a .008 light. In both instances, Doll had the power to prevail.

By the time he reached the final round, Doll had lost just .01-second off his index; opponent Frank Cervelli was down just .03-second in his B/DA. Doll finished the job when Cervelli missed the Tree. Doll was noncommittal when asked about his pursuit of the national championship following his Epping win, but there is a good chance that has changed now that he’s halfway to a perfect season and is ranked second in the standings, with far fewer scored events on his docket than leader Rampy.

Race of the event: With his third straight win, David Barton was again the star of the School of Automotive Machinists & Technology NHRA Factory Stock Showdown, but the best race of the weekend came in the semifinals, when Bruno Massel took on Chris Holbrook. The classic Ford vs. Chevy battle began with a lengthy starting-line burndown, but that wasn’t enough to distract either driver. Massel took the early lead with a .008 light in his COPO Camaro, and Holbrook was right behind with a .013 bulb in his Cobra Jet Mustang. At the finish line, the scoreboard lit up with identical 8.578 elapsed times, but based on his quicker light, Massel was .005-second ahead.

Run of the event: There wasn’t much chance of anyone beating Jeremy Demers in the second round of Super Comp because he flirted with an elusive perfect run. Demers defeated Tom Hunter with a package that included a .000 light and an 8.904. Hunter was competitive with a .020 light and an 8.890 breakout.