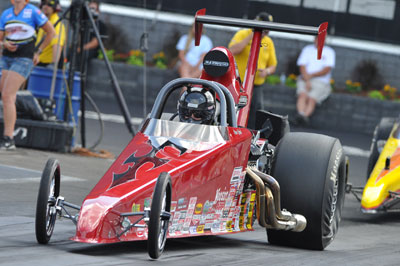 Quick, who is the hottest driver in the NHRA Lucas Oil Drag Racing Series so far in 2016? If you answered with anyone other than Division 2 racer Steven Furr, you’d be wrong. Between Top Dragster and Super Gas, Furr has already appeared in seven final rounds in 2016, and he has opened up a big lead in the battle for the national championship in the Top Dragster presented by Racing RVs class.

In Super Gas, Furr has driven his Camaro to a pair of divisional event wins, in Richmond, Va., and Benson, N.C., but he has done most of the damage with his Top Dragster. In nine Top Dragster races, Furr has three wins and two runner-up finishes, which gives him a lead of more than 100 points over second-ranked Aaron Stanfield. As good as he has been, Furr understands that the calendar still reads June, and he’s not about to think about making banquet plans yet.

“I have been having a great season so far, especially in Top Dragster, but the points don’t count until the end of the year,” said Furr. “I do have a good total, though; I’m not at all disappointed. What happens a lot of times is that you put up a good score, and someone who wasn’t even in the top 30 comes along and puts together a bunch of wins and catches you. We’ll see if that happens this time.”

Furr believes his recent success in Top Dragster can be traced to last season, when he decided to forgo his nitrous-oxide combination in favor of a ProCharger. The addition of a centrifugal supercharger has elevated his performance from 205 to 225 mph and helped make his car more reliable and consistent. 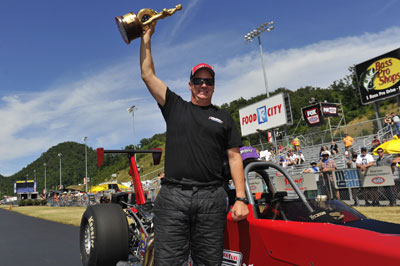 “Scott Duggins at PAR does my engines, and he built this ProCharger combination last year,” said Furr. “I had a chance to go test it along with some new Hoosier tires towards the end of the season, and that was a great learning experience. I had an issue with the engine about three weeks ago, but the guys at PAR stopped what they were doing and got it fixed. This ProCharger deal is amazing. The car goes 225 now and doesn’t tear up stuff. It’s crazy to think we’re bracket racing cars that fast; it’s a long way from where I started racing cars that ran 90 mph in the eighth-mile, but I really enjoy the whole Top Dragster thing. It’s a lot of fun and keeps it exciting. I look forward to driving that car every weekend.”

Furr has a pair of top-five finishes in Super Gas, and he was 14th last season in Top Dragster, the first year that drivers in the class raced for a national championship, so he knows the rigors of a points battle. He also knows the value of having friends at the track, and one of Furr’s biggest supporters is fellow racer and former Super Stock national champ Anthony Bertozzi.

“I wouldn’t be leading the points right now if it wasn’t for Anthony,” said Furr. “Last month, at [the Division 2 NHRA Lucas Oil Drag Racing Series event at GALOT Motorsports Park], I had a problem with my car, and Anthony let me drive his car, which has pretty much the same setup. Anthony wasn’t even entered in the race, but he sent his crew guy, Phil Ivey, with the truck and trailer and race car for me to run. I withdrew my car and reentered the race with Anthony’s car and got to the final round. Otherwise, that would have been a 10-point race. There’s no one that I owe more to than Anthony and, of course, Phil. He was sitting at home taking the weekend off, and he just loaded up the truck and came to Raleigh [N.C.] to bring me a car. That says a lot about those guys.” 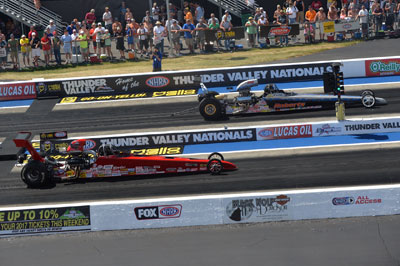 As for the championship battle, Furr has a plan: He'll go to Route 66 Raceway next month for the JEGS Allstars event, then he will take the next two months off to get through the hot summer season.

“When I come back out in the fall, we’ll see if I’m still leading or if someone got hot and passed me,” he said. “If I need to, I can go out West to Las Vegas for the last points meet. We’ve already discussed it, and I can put my car in Anthony’s trailer because he’s already going. I won’t look at the points for a while, but I have two national and two divisional races left to claim, and I could put together one more good race; I’d like to think I’d at least be in contention at the end of the year.”

Last season, eventual champ Marco Abruzzi finished with an even 600 points, and it took a score of 503 to make the top 10. Though there is no guarantee that 600 points will win the title again, Furr's current total of 557 would seem to make him a big midseason favorite.

Strick strikes again: Steven Furr isn’t the only Bristol winner with a legitimate shot to win a national championship. Jeff Strickland, who drove to his second national event title of the season, is climbing the standings in Stock eliminator. Following the Bristol event, Strickland is ranked second, just 18 points behind the driver he beat in the final round, Alabama neighbor and good buddy Adam Davis. 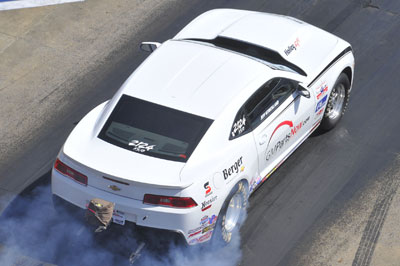 At this point in the season, Strickland’s scorecard is already loaded with late-round finishes. In addition to his two national event wins, he has a pair of semifinal showings at divisional events and a pair of round-four finishes. Strickland has only attended four divisional events, and one of those outings resulted in a first-round loss, so his current total of 508 points is sure to rise significantly. There is no point in even trying to predict how many points it will take to win the title, but if Strickland can bank one more victory, he would almost certainly guarantee himself a coveted top-10 finish.

Though a national championship is huge for any NHRA Sportsman racer, it would represent an enormous accomplishment for Strickland because he drives a COPO Camaro for the Gray Motorsports team. Last year, Kevin Helms became the first driver to land the top spot behind the wheel of a factory race car when he drove the Southland Dodge Drag Pak Challenger to the title. The prospect of Strickland, or anyone else in a COPO Camaro, taking the next championship would certainly be appealing to everyone at General Motors who supports the COPO program.

Race of the event: Rusty Cook cut back-to-back perfect .000 reaction times in the second and third rounds of Super Gas eliminations but had almost nothing to show for it. Cook used his first perfect light to defeat Clint Lindsey, but the second one wasn’t good enough for a win, even when accompanied by an equally impressive 9.909-second elapsed time on the 9.90 index. Cook’s .009-package was just not enough to hold off eventual runner-up Leo Zynda, who was .002-second better with a .003 light and a 9.904.

Run of the event: At least a half-dozen female drivers were in the 32-car Top Dragster field, but none was quicker than Shanna Snyder. The sister of former Top Alcohol Funny Car racer Mick, Shanna drove Troy Stone’s colorful Vintage Trailers dragster to an impressive 6.02 at more than 235 mph to take the top spot in the class. Snyder’s supercharged dragster is capable of running in the five-second zone, but it is detuned slightly because Top Dragster competitors are limited to 6.00 seconds.