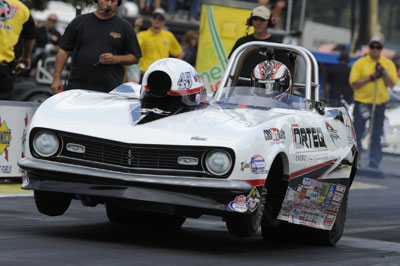 Using Sportsman racing to launch a Pro career is one thing, but there are a number of today’s best-known Pros, including Enders, fellow Pro Stock drivers Jeg Coughlin Jr., Drew Skillman, Bo Butner, Jason Line, and Top Fuel drivers Shawn Langdon and Dave Connolly, who occasionally “double up” by racing both a Pro and Sportsman class at the same event.

Enders won her first NHRA national event title in the Super Gas class in 2004, and when car owners Buddy Wood and Cody Ortowski asked her to drive their Corvette this season, she didn’t need much convincing.

“I jumped at the chance,” Enders said. “It'll be great to get back to my Sportsman roots a little and to visit with and race all my friends that run Super Gas. I'm just going to have some fun with it. The car is good — it can win any race we enter — so I'll do my best to put it in the winner's circle.”

Since her Pro Stock debut more than a decade ago, Enders has raced a Sportsman car only sporadically. She does realize, however, that there are several benefits associated with racing two cars at the same event, even if they require two completely different driving techniques. 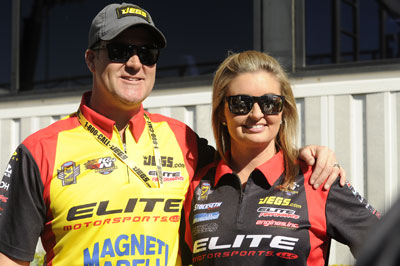 “It won't be easy. The Super Gas category is very tough, and I'm sure my competition will be more than ready for me every race,” Enders said. “My teammate, Jeg Coughlin Jr., has run two cars a number of times in the past, and he said it makes for a busier weekend for sure but that it also allows you a better chance to lock in on the Tree and make a bunch more passes, which keeps you in race mode. By doubling up I'll actually be cutting down on the distractions we all face at national events. I'll be too busy.”

Any racer who drives two cars at the same event (whether two Sportsman entries or one Sportsman and one Pro, per NHRA regulations) wants to achieve the ultimate goal of a double victory. To date, 19 different drivers have combined for 32 doubles, but the only driver to win both a Pro and Sportsman class at the same event is Pat Austin, who claimed the Top Fuel and Top Alcohol Funny Car titles at the 1991 Topeka race and again the following season in Phoenix.

Langdon has nearly duplicated Austin’s feat a couple of times, most notably at the 2010 Chevrolet Performance U.S. Nationals. On drag racing’s biggest stage, Langdon won the Super Gas title, ousting national champ David Tatum III in the final round by less than a hundredth of a second. Competing in Top Fuel with the Lucas Oil team, Langdon made it to the semifinals before losing a competitive battle against Larry Dixon. Langdon also won the Super Gas title at the Sonoma race in 2010, a victory that no doubt helped take the sting out of a round-one loss in Top Fuel.

Coughlin has also come close to a Pro/Sportsman double. At the 2010 St. Louis race, he drove his brother John’s JEGS.com dragster to the win in Top Dragster and then returned a few minutes later for the Pro Stock final against six-time champion Warren Johnson. Coughlin enjoyed a sizable performance advantage over Johnson so a double appeared nothing more than a formality, but Coughlin’s car broke a rear end on the starting line. Coughlin has often stated that it remains one of the most painful losses of his storied career. While his plans are not finalized, Coughlin may well pull double duty at a few events this season either behind the wheel of his Dodge Drag Pak Challenger Stock entry or his Chevy II station wagon, which is set up for the Super Street class. The Chevy II might present the most attractive option for Coughlin because it would allow him a chance to win a national event title in an eighth different eliminator. No other driver has won in more than six classes. 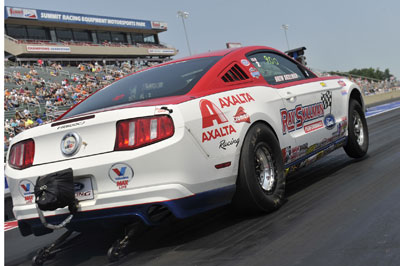 Skillman and Butner are two relative newcomers to professional racing, and when both of them decided to make the leap to Pro Stock — Skillman in 2014 and Butner last season — neither of them was willing to give up their Sportsman ride. Butner continues to race his Cobra Jet Mustang in Stock and also stays busy helping his fiancée, Randi Lyn Shipp, the Stock champ at the recent CARQUEST Auto Parts NHRA Nationals in Phoenix.

Skillman, who won his first two national event titles within minutes of each other when he bagged the Stock and Super Stock classes at the 2012 Atlanta race, continues to pull double duty at select events. In addition to his full-time gig as the driver of the Elite Performance Pro Stock Camaro, Skillman occasionally races his Cobra Jet Mustang, primarily at NHRA Factory Stock Showdown events. Last season, Skillman raced in Stock and Pro Stock at four events. At Summit Racing Equipment Motorsports Park in Norwalk, Skillman was a very busy guy on Sunday when he drove to a runner-up finish to Greg Anderson in Pro Stock and reached the semifinals in Stock, where a heartbreaking -.010 red-light ended his weekend.

“I do think it’s a bit of an advantage to race two cars,” said Skillman. “The way I see it, our team has a bunch of Sportsman cars, so I’d feel silly just letting them sit there. We have room in our trailer so we might as well get out and use them. Racing in Stock, I do get more comfortable before I drive the Pro Stock car. It’s easier to get in a rhythm, and at the end of the day, a race car is a race car. You can have a bad weekend in one car and a good weekend in the other, and you’ll still feel pretty good about it. I really don’t see a downside to racing two cars.” 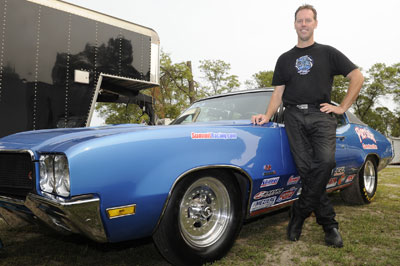 When asked about the possibility of the rare Pro/Sportsman double, Skillman didn’t hesitate.

“I’ll get it one of these days,” he said. “It’s definitely on my list. It will take a lot of luck, but as long as you have two competitive race cars, which we do, it’s always a possibility.”

Finally, there is the story of Jason Line, who made a long-awaited return to Stock last season. With the exception of a one-race stint in the NHRA Mopar Hemi Challenge at Indy, Line, a two-time Pro Stock champion, had not raced a Sportsman car since the 1990s, but he returned to Stock in 2015 at his home event in Brainerd and then Indy behind the wheel of the same D/SA Buick that carried him to the 1992 Stock national championship. For the last several months, Line, who heads the development team at KB Racing, has been busy with the changeover to fuel injection, but it seems entirely likely that the Buick will make another appearance this season.