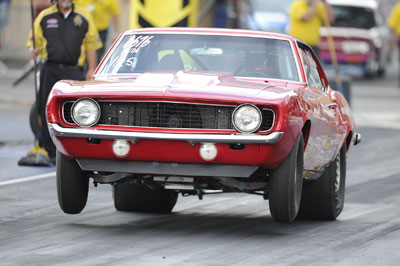 Queen of 'the Mountain': Pro Stock driver Allen Johnson has rightfully earned his place as the king of Denver’s Bandimere Speedway, but Super Stock racer Jackie Alley isn’t far behind. Alley, the 2011 national champion, has won three NHRA national event titles behind the wheel of her classic ’69 Camaro Super Stocker, and all three of them have come in the thin mountain air of Denver.

Alley scored her latest win at the expense of the sport’s best Super Stock racer, Dan Fletcher, who missed out on a chance to claim his 99th win with a frustrating -.003 red-light in the final. Alley doesn’t know why she has had so much success at Bandimere Speedway, and she’s not about to question it.

“I honestly don’t know what it is about this place,” said Alley. “This is the only track where my car runs in the 10s. Maybe I need to slow it down when we go race everywhere else.”

With the exception of the final, where she was late behind Fletcher’s red-light, Alley was solid on the starting line, including a .012 light in the quarterfinals against Craig Gualtiere and a .003 in her semifinal win against Carroll Warling’s vintage Pontiac.

“My car was actually pretty inconsistent this weekend,” Alley said. “We got it done with reaction times.”

When Alley says “we,” she’s referring to her husband and crew chief, Mick, who came into the Denver event on a high note after winning the JEGS Allstars title behind the wheel of his ’69 Camaro Stocker. Mick red-lighted in the first round in Denver and quickly donned his crew chief hat to help his wife the rest of the weekend.

“This has been a good couple of weeks,” she said. “[Mick] was long overdue for a big win, and he finally got it. I have to thank him for this [win]; he does a great job with my car.” 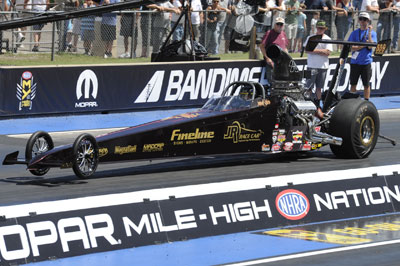 Johnson & Johnson: Super Stock champ Jackie Alley and her husband, Mick, aren’t the only husband-wife duo who have had a lot to celebrate lately. Bandimere regular Steve Johnson is also riding high after his victory in the Top Dragster presented by Racing RVs class. Johnson, no relation to the Pro Stock Motorcycle racer of the same name, was the low qualifier in Denver and won his second national event title in a double-breakout final against Larry Piper. For Johnson, the victory came one year after his wife, Victoria, won the Denver Top Dragster title.

“This was an absolutely huge win for us,” said Johnson. “It’s unbelievable to win up here. I left it short twice in final rounds, but it was nice to follow my wife and bring it home again.”

Johnson’s roots in the Denver racing community run deep. He operates Fineline Graphics, one of the many Denver-based companies run by recently retired Pro Stock driver V. Gaines. Johnson’s low-six-second Bos Racecraft-built dragster was also a crowd favorite in Denver with big wheelstands that often went well past the 60-foot clocks. While it may at times have appeared erratic, the car was quite consistent with several 6.4-second runs in eliminations.

“The big wheelstands; that’s when the car works best,” said Johnson. “In the semifinals, we played with some weight, and the car left with the wheels on the ground, but I didn’t like it. We went back to what worked for the final. Man, is it fun to drive.” 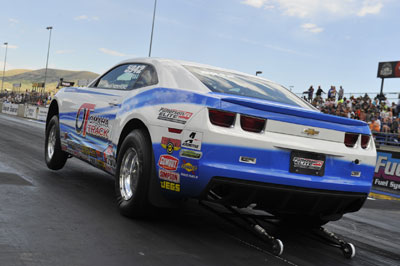 Back to back: Ryan Montford can relate to both the Alley family and the Johnsons after winning the Stock title in Denver for the second straight year. Driving Terry and Holly Peterson’s Omaha Track COPO Camaro, Montford won the final round in a double breakout against Norman Warling, who was a fan favorite with his 13-second vintage ’62 Pontiac Catalina.

“I guess I just love this racetrack,” said the Wichita, Kan.-based Montford. “Denver is turning into a home away from home. This [win] was much smoother than last year; we had no excitement, which is a good thing.”

Montford, who has won 12 straight rounds in Denver, also couldn’t help but notice the near-sellout crowds that packed Bandimere Speedway for all three days of the Mopar Mile-High NHRA Nationals.

“It’s so cool to race in front of a crowd like this,” he said. “We don’t get to do that too often. I think it’s a safe bet that we’ll be back here next year.”

In case you missed it: In addition to the Mopar Mile-High NHRA Nationals, four NHRA Lucas Oil Drag Racing Series events were contested last weekend, in Epping; Columbus; Woodburn, Ore.; and Sonoma, and more than 40 individual event champions were crowned. The biggest winner of them all may have been Division 1 racer Doug Doll Jr., who likely sealed the deal on the 2016 Comp national championship by winning his sixth event in seven starts.

Doll, who began driving for team owner Charlie Greco earlier this season, has won four Lucas Oil Series divisional races and two national event titles this season. The former Chevrolet Performance U.S. Nationals Super Comp champ has a robust score of 592 points, and he still has a full divisional event left to claim on his scorecard. Since the start of the season, Doll is 28-1 in eliminations rounds, with his only loss coming in the quarterfinals of the NHRA Summernationals in Englishtown, where he was outrun by Dave Hughes’ A/Altered.

The highest score possible for a Comp racer is 770 points (including a U.S. Nationals victory), and Doll is on pace to crack the 700-point mark. With nearly a half-season left, Doll has not mathematically locked up the national championship, but there is little doubt at this point that it will take a herculean effort to unseat him from the top spot.