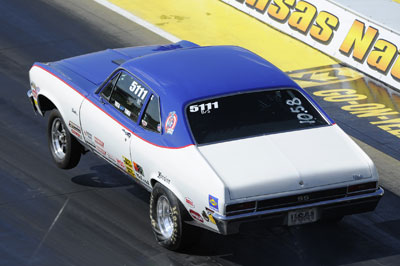 Much has been made about the recent surge in wins by women in the NHRA Mello Yello Drag Racing Series, including Brittany Force’s first Top Fuel wins in Gainesville and Charlotte as well as Funny Car victories by her sister Courtney and Alexis DeJoria in Houston and Las Vegas, respectively. Women have already claimed five Professional wins this season, and with the emergence of rising Top Alcohol Dragster star Megan Meyer and a Stock win by Randi Lyn Shipp in Phoenix, it should not have been a surprise to the fans in Topeka when Trista Fenner and Brenda Grubbs met in the sport’s first all-female Stock final.

Regular readers of NHRA National Dragster are probably familiar with Grubbs thanks to her popular Travels with Brenda column or one of her wins at big events, including the JEGS Allstars and Mopar Mile-High NHRA Nationals. Grubbs is also a past IHRA champion, and her bright red A/SA ’69 Camaro is a fan favorite, particularly when it hangs the front wheels in the air for the first 100 feet of the track, which is a frequent occurrence.

Fenner is perhaps better known by her maiden name, Henderson. She is the daughter of longtime Division 5 class racer Larry Henderson, and her brother, Troy, has also raced a manually shifted Stocker. Last November, she married fellow Division 5 Stock racer Derek Fenner. At the NHRA Kansas Nationals, Fenner defeated Grubbs in the Stock final to win her first NHRA national event Wally. With the victory, Fenner became the 73rd woman to win a national event title and the 10th woman to win in Stock. Perhaps more important, Fenner single-handedly destroyed the notion that it takes a macho man to win in a stick-shift car, although she does acknowledge that her four-speed-equipped B/Stock ’69 Nova is not for the faint of heart. 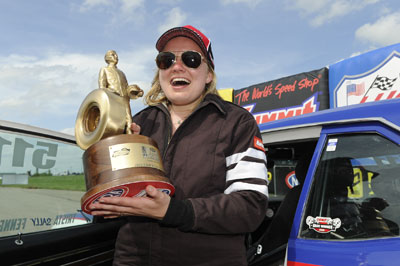 “Growing up around my dad, he’s raced a stick car forever, so when I finally started racing, I wanted to give it a try,” said Fenner. “It’s the most terrifying and exciting thing ever. When I first got in the car, it was really intimidating. I could barely drive it around the pits, and I’m thinking, ‘How do you win a race when you can’t even drive this to the staging lanes?’ [Manual transmissions] are always a battle. Sometimes my arm hurts the next day, but after a while, I’ve gotten used to it.”

Fenner and Grubbs have crossed paths several times, so neither was about to take the other lightly. “Brenda has beat up on me and everyone else in my family at some point,” Fenner said. “She absolutely has my respect.”

The final featured more than just a pair of experienced women drivers; it was also a battle of vintage Chevrolet muscle cars, with Grubbs’ AA/SA 427 Camaro enjoying a slight performance advantage over Fenner’s 402-cid-equipped B/S Nova. Grubbs, appearing in her third national event final, gained a slight edge at the start, but Fenner was first across the finish line with a winning 10.68 on her 10.67 dial.

“We spun the tires in the semi’s, and we made an adjustment for the final, and the car hooked and did a big wheelstand, so I wasn’t sure where I was at,” said Fenner. “It was so cool not just to get a win, but also to be a part of an all-girl final like that. And to win this race in a stick car makes it even more exciting.” 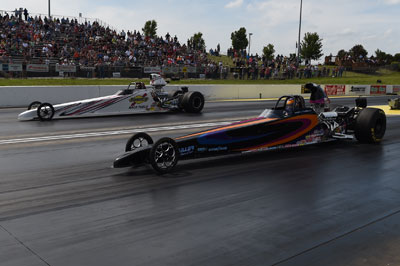 Second chances, part two: In last week’s edition of The Sports Report, I wrote about how Jimmy Hidalgo Jr. quickly overcame the disappointment of losing the Atlanta Stock final and returned a few minutes later to take the win in Super Stock. In Topeka, Austin Williams had a very similar experience when he drove to a semifinal finish in Stock and rallied to earn the win in Super Comp. Williams, the 2014 Stock national champ, made his way through the fields in both classes and found himself entering Sunday’s final rounds with his shot at a double win still intact. In the semifinals of Stock, Williams took his E/SA Duster up against the AA/SA ’69 Camaro of Brenda Grubbs and came up six-thousandths short at the finish line. It was the first time in four years that Williams did not win the Stock title in Topeka.

Down to just one entry, Williams knuckled down and closed the deal in Super Comp. Coming off a bye run in the semifinals, Williams faced Mike Green in the final round and gave himself the best chance to win with a perfect .000 reaction time, but Green followed suit with a .008 light. A split-second decision to hit the brakes worked in Williams’ favor after he turned on the win light with an 8.93, sending Green on to an 8.88 breakout. With the win, Williams is 9-4 in final rounds, four of which have been at Heartland Park Topeka.

Run of the event: Chassis builder and 2015 Topeka Top Sportsman champ Larry Larson returned to Heartland Park Topeka to defend his title and drove his amazing turbocharged Chevy S-10 truck to the No. 1 spot with a 6.144, 239.65. Larson was four-tenths quicker than No. 2 qualifier Rick Wilson.

Race of the event: There is no other way to put this other than to say Bill Dennis might just have been the luckiest racer in Topeka last week. In the second round of Super Comp, Dennis ran into an obvious problem with his dragster. Dennis left the starting line with a 7.67-second reaction time and limped down the track with a 19-second elapsed time. Imagine Dennis’ surprise when he looked up to see his win light on. Mark Moore was solid off the starting line with a .015 light but broke out by six-thousandths at the finish with an 8.894.

In case you missed it: Even though the Division 6 event at Spokane County Raceway was postponed by rain, there was plenty of NHRA Lucas Oil Drag Racing Series divisional action on tap last weekend, including the Division 7 race at Auto Club Dragway at Auto Club Speedway in Fontana, Calif., and the Division 3 event at Summit Racing Equipment Motorsports Park in Norwalk. That race also featured the completion of the rain-delayed Division 3 opener from Lucas Oil Raceway at Indianapolis a few weeks ago.

One of the more notable champions crowned last weekend was four-time national champ Jimmy DeFrank, who won the Super Stock title in Fontana. DeFrank now has a pair of wins on the season, and he’s taken over the top spot in the Lucas Oil Super Stock standings. Interestingly, it was also a big weekend for DeFrank’s crew chief, Jeff Taylor, who was in Norwalk to watch his son, Chad, win the Super Stock title at the Division 3 event.