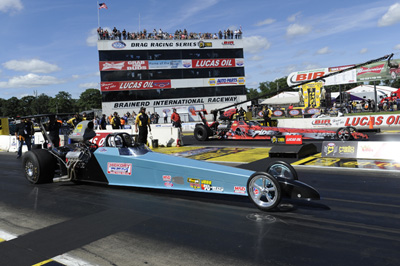 Prior to the 2016 season, NHRA had just one all-female final round, the memorable 1982 Columbus Top Fuel final between Shirley Muldowney and Lucille Lee. This year, there have been three such races: the Phoenix Top Fuel final featuring Leah Pritchett and Brittany Force, the historic Topeka Stock final with Trista Fenner and Brenda Grubbs, and now, the Lucas Oil NHRA Nationals Top Dragster presented by Racing RVs final between Angie Travis and Jenifer White.

North Carolina’s Travis prevailed over Texan White, and the final was typical of the close racing found in the Top Dragster class. Both were excellent off the starting line, with Travis taking a .002 to .014 reaction-time lead, and at the finish, Travis scored with a 6.412 on her 6.39 dial while White was less than two-hundredths behind with a 6.207 on her 6.18 dial.

As much as any other Sportsman category, the Top Dragster class has attracted a large number of competitive female drivers, including Travis and White, as well as Lauren Freer, Melissa Hutson, Shanna Snyder, Ashley Tidrick, Lindsey Barker, and Madison Ellison, all of whom are ranked in the top 50 nationally.

For Travis, whose company, Hickory Enclosed Trailer Sales, is the title-rights sponsor of the Top Dragster class in the Southeast Division, the victory marked her first national event triumph. En route to the final, she defeated both John and J.R. Lobner, two of the toughest competitors in the West Central Division. Travis also drove to a close win over Kent Hagberg, who broke out after a nearly perfect reaction time.

White has a solid résumé that includes a national event victory at the 2011 Bristol race and, more recently, a win at the Division 4 NHRA Lucas Oil Drag Racing Series event at Texas Motorplex earlier this season. White’s car is also one of the quickest in the class, running close to the 6.00 limit.

In a year that has been dominated by women, Travis became the 14th female racer to hoist a Wally this season. In addition to wins by well-known Pros Pritchett, Alexis DeJoria, Angelle Sampey, and Courtney and Brittany Force, the champions list includes Megan Meyer, Mia Tedesco, Heather Fetch, Freer, Jackie Alley, Allison Smyth, Fenner, and Randi Lyn Shipp. Incredibly, two-time Pro Stock world champion Erica Enders is not on the roster, but based on her recent results, including a semifinal showing in Brainerd, that could change soon. 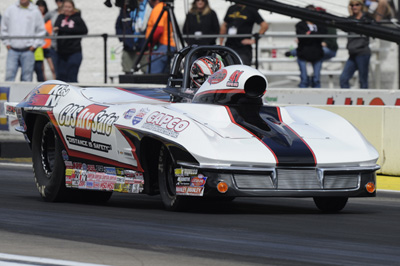 No. 36 for Phillips: After claiming his first Super Stock win this season in Houston, Tommy Phillips returned to his more familiar hunting grounds in Super Gas and claimed a second national event title this year when he stopped fellow hot shot Jason Lynch in the final round. Phillips cut a .010 light in the final and gave up the finish-line stripe, allowing Lynch to cross first with a 9.89 breakout.  For Phillips, the victory was the 36th of his career, one more than Top Fuel legend “Big Daddy” Don Garlits.

“I got a little fortunate there in the final,” said the ever-modest Phillips. “Jason is an awesome driver, and it’s a shame we came all the way to Minnesota to race each other. We’ve been racing each other a long time, and he’s a great champion. I know you can’t win one of these races without a little luck and a real good race car, and we had that today.”

Phillips' comment about having a “real good race car” is noted, and he must be particularly impressed with his CBS ArcSafe Corvette, a new race car that made its debut recently. Both Phillips and the car were rock-solid making their way through a tough Brainerd field that included two-time national champ Luke Bogacki and two-time Indy winner Brian Folk, who both lost to Phillips.

“I love racing here in Brainerd,” said Phillips, who has now won three times in Minnesota. “I’ll keep coming back as long as they have this event.”

Surprisingly, the Lucas Oil NHRA Nationals marked Phillips' first national event appearance of the season in Super Gas, although he is ranked in the top 20 in Super Comp, his other bread-and-butter eliminator. 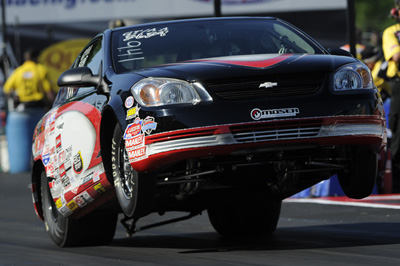 Strong showing for Folk: Nick Folk’s primary goal heading to Brainerd was simply to earn points in his ongoing quest to win the Super Comp national championship. Folk missed that goal when he lost in the first round, but he salvaged the weekend with a runner-up finish in Super Stock, and as a result, he now finds himself involved in two championship battles.

Folk suffered an unexpected round-one loss in Super Comp, but he went to the final in Super Stock, where he lost to three-time national event winner Mario Stephenson. After nearly identical reaction times, Folk came out on the losing end of a close double breakout. Despite the loss, he added 44 points to his score, which puts him in third place, well within striking distance of incoming leader Jimmy DeFrank and second-ranked David Rampy.

Folk has work to do to win a national championship in either class, but he has attended relatively few races in comparison to most of the other contending drivers. In both Super Stock and Super Comp, Folk has attended just four national events and six divisional races, which means he has four opportunities in each class to better his score.

As a side note, had Folk won the Super Stock final, he would have joined the short list of drivers who have won national events in six or more categories, which currently includes seven-class winner Jeg Coughlin Jr. Folk already has national event victories in Stock, Super Comp, Super Gas, Super Street, and Top Dragster, not to mention a host of major E.T. bracket racing titles.