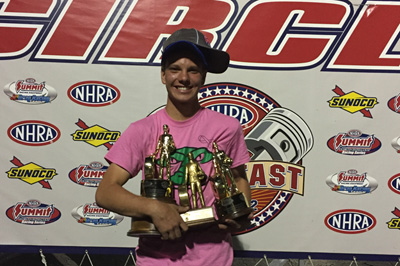 So you’ve never heard of Gage Burch? Stick around a while, you almost certainly will. As a quick introduction, Burch is a 16-year-old drag racing prodigy from Palmetto, Fla., who is in the process of making the jump from the NHRA Summit Racing Jr. Drag Racing League to “big car” bracket racing. The Palmetto High School student made history last weekend when he captured four Wally trophies at the Southeast Division NHRA Summit Racing Series Finals at Atlanta Dragway, including three in one day. On Saturday, Burch drove his Jr. Dragster to the title in the Advanced Class Race of Champions and then returned to win the Sportsman Race of Champions and the High School event, winning 12 straight rounds. To cap it off, Burch jumped back in his Jr. Dragster on Sunday and won six more rounds to claim the Division 2 Advanced Jr. Dragster title for drivers ages 13-17.

“I’ve been lucky and won quite a bit but nothing this prestigious,” said Burch. “I doubled up at an IHRA race at home and won a few other big races, but obviously I’ve never won four Wallys in a weekend. From what they’re telling me, no one has done that. It’s pretty cool to think I’d be the first one to do that.”

Even though Burch is only 16, he’s already got a massive collection of NHRA Wallys thanks to his success in the NHRA Jr. Drag Racing League. Counting the four he brought home from Atlanta, he’s got 22 of the coveted gold statues, and it’s worth noting that he’s yet to compete in an NHRA national or divisional event.

Burch celebrated his 16th birthday last February and immediately started to race in bigger events, and his early results have been impressive. So far in 2016, he’s won a $3,000 first-place prize at the World Footbrake Challenge at Bristol Dragway. A week later, Burch jumped back into his Jr. Dragster at the Eastern Conference Finals in Bristol and demolished a strong 64-car field for an additional $5,000 payday. One can only imagine the thrill of telling your high school friends that you spent your summer vacation winning $8,000 at the dragstrip. 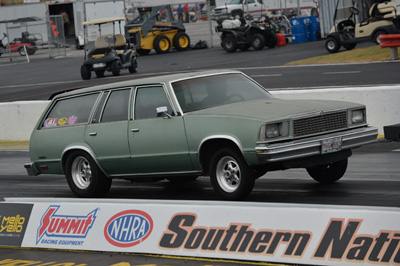 “I’ve made a lot of runs in my Jr. Dragster and that helps, even when I drive a bracket car,” said Burch. “Mostly, I try not to think about the money or the trophy or anything like that. I just try and treat each round the same as the last one. I try to be cool under pressure and usually don’t get too excited, even when I win.”

Burch’s cool demeanor was a big asset in Atlanta, especially during Saturday’s three-win performance. He was able to maintain an even keel throughout the busy day and had little trouble adjusting to three different vehicles. Burch was particularly effective in the High School class, where he won the final round with a .009 reaction time and an 8.208 on his 8.20 dial on the eighth-mile course.

“I thought I was driving pretty well all weekend,” said Burch. “I was just in a groove and didn’t have to do too much thinking. After I won the first race, I was happy, and then when I got the second win, I felt like I was on a roll. I didn’t get nervous at all thinking about whether or not I was going to win all three finals. As far as driving three cars, that doesn’t bother me. Actually, I like it because it keeps you on your toes. You have a separate routine for each car, and you just have to remember which one is which. That’s a lot of fun to me.”

Burch didn’t have much time to celebrate his three-win performance because the next morning he was back in action in the Sportsman and Advanced Jr. Dragster classes. He lost in the second round of Sportsman due to a five-thousandths red-light, but he went the distance in the Jr. Dragster to win his fourth Wally in less than 24 hours. All told, Burch put together an enviable 19-1 record in eliminations rounds during the event, but even with such success, he was able to take it in stride. 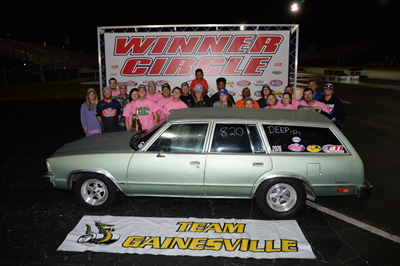 “I’m just really thankful to be in that scenario,” he said. “Not many people ever get an opportunity to win four of these in one weekend. I won’t forget this, ever. After I won the third race, my dad was like, ‘Are you kidding me?’ and my mom was crying, and all my friends were there. It was really cool. I really need to thank my parents [Matt and Diane], B.J. Bianchi, Manny Sosa, the Wick family, Mike and Danielle Mocny, Roy and Candy Hagadorn, Chris and Laura Adams, FTI, and Mickey Thompson tires and wheels.”

So what’s next for Gage Burch? In the short term, he plans to continue his transition to big car racing by competing in more big-money bracket races and local events. He’ll also race his Jr. Dragster until his eligibility runs out next year. Looking ahead, Burch hopes to make his national event debut at the 2018 Gatornationals, which figure to take place about a month after his 18th birthday.

“I’m not too picky, but I’d eventually like to end up in a Professional class,” Burch said. “I love this sport; it’s more than just a hobby to me. Even if I don’t get that car, I want to be a Sportsman racer. I’d love the chance to drive just about anything really, a Super Comp car or a Stocker or whatever. It really doesn’t matter as long as I’m out there competing. I’m not picky at all.”