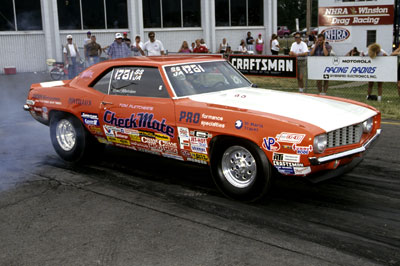 Ask Dan Fletcher about what made him want to become a professional touring racer, and he’s succinct and to the point. One of NHRA’s most recognizable Sportsman drivers, Fletcher said that when it came to chasing his dreams, half the battle was just making the decision to go do it.

“Don’t just stand around and talk about it; get out there and do it,” he said. “I think half the world has unrealized ambitions and dreams. They don’t fulfill themselves. Don’t be afraid to hit the nail with a hammer. What I did back then, I know it seems like a big risk today, but that’s what I was thinking at the time.”

By now, most NHRA fans probably know the story of Fletcher: The guy decided to give up a not-so-glamourous life as a 9-to-5er at Xerox in order to race full time with his matching ’69 Camaro Super Stock and Stock cars. Fletcher won his first national event in Columbus in 1994, and that gave him the revenue to head west for the Western Swing through Denver, Sonoma, and Seattle. Incredibly, he swept all three of those events. Returning to his upstate New York home with upwards of $60,000 — more cash than he’d ever seen in his life — the lightbulb went off. Within two years, Fletcher had left the corporate world and hit the road.

More than 20 years later, Fletcher is still at it. He now has a fleet of six race cars that are all backed by Peak, and his sons, Thomas and Timothy, are also national event winners. Entering 2016, Dan is on the verge of achieving a milestone that few would have ever thought possible. With six more wins, he will join John Force and Frank Manzo as the only drivers to win 100 NHRA national event titles. Acknowledging that patience has never been his strong suit, Fletcher, not surprisingly, wants the next six wins to come sooner rather than later. 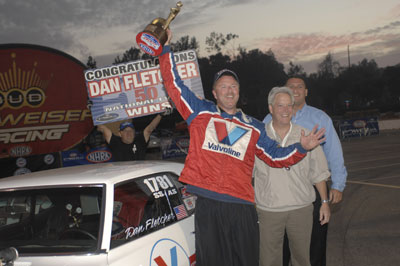 “It better [expletive] happen this year,” Fletcher said. “Clearly, I sucked last year. I had hopes of having an off the chart season and getting there [to 100 wins], but I only won three times. Things just didn’t play out the way they were drawn up. Historically, I think my average has been about six, and maybe that’s not a realistic expectation anymore because God knows these things aren’t easy to win. Still I have a full year ahead of me to do it. I had three wins last year, but I also had three runner-up finishes. If things happen a little differently, I’m even closer.”

Fletcher has never been much of a “numbers guy,” but even he can’t ignore the historical significance of 100 wins, especially when he considers the company he will be keeping. With 94 wins, Fletcher needs three to tie six-time Pro Stock champ Warren Johnson. After that, it’s just Manzo (105) and Force (143), who have also combined to win 33 championships.

“Yes and no, this whole thing has kind of been on my radar for a while,” Fletcher said. “I think that when I got to 86 and passed Bob Glidden, that was when it hit me. I got a call from Bob, and I still think that was the most awesome thing in the world. Then, I sort of went past David Rampy, and that was big. Now I’m so close to 100 that I can’t stop. Even if it takes me five years, I have to stick with it. I also think I can probably catch Frank, but only because he’s retried and that’s a stationary target. Force? Forget it. No way. I’ll never get close to 143 wins, and I don’t think he’s done yet. He’s going to have 150 or more before he’s done.” 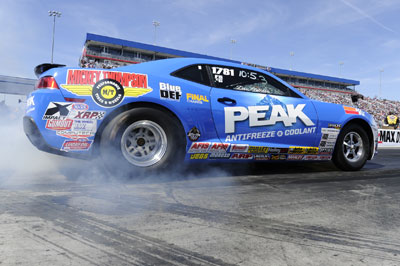 As much as he looks ahead to win No. 100, whenever that is, Fletcher also looks back at the gutsy decision that has allowed him to spend the last 20-plus seasons competing in almost every stop on the NHRA Mello Yello Drag Racing Series tour. Today, it’s easy to label him as a risk-taker, but Fletcher insists that the initial decision wasn’t as hard as it seemed, even though he was a young family man with bills and responsibilities.

“Back then, this was a plausible business model,” he said. “For one thing, I was barely making $40,000 a year at my regular job, but my monthly overhead was probably $2,100. I figured I needed to make between $25,000 and $35,000 to make it work, and back then, that was about two national event wins. Between round money and other races, I thought it won’t take that much to gross $50,000. I know it sounds crazy, especially today when everything costs so much more, but back then, it didn’t seem that far-fetched. I think there was much less risk than if you tried to do it today.

“The sad thing is that none of this would have happened if my dad hadn’t died suddenly in 1994,” Fletcher said. “I mean, the Camaro was his car, not mine, and if I had ever told him that I was going to quit my job to go racing, that would have been laughable. Obviously, this has worked out for me, but I still find it a little crazy that I haven’t had to walk in a door and punch a clock since 1997,” Fletcher said. “I’ve been self-employed for almost two decades. Yeah, I’m the guy who has made a living and supported a family driving around the country in a motorhome with two '69 Camaros. It almost seems like smoke and mirrors now; it’s insane.”

In the midst of reminiscing about his first 94 wins, Fletcher has few regrets, and he admits that even if he had a do-over, there’s not much he would have changed.

“It’s been great,” he said. “I have enjoyed it a lot. I know I complain a lot, but I’d do it again. I wouldn’t change much, but I wish the economy hadn’t hurt us all for the last eight years or so. That’s made it really hard to survive out here. Expenses go up, revenue goes down, but the miles stay the same. It does look like we might get a bit of a break this year with fuel prices, so I guess there’s that.” 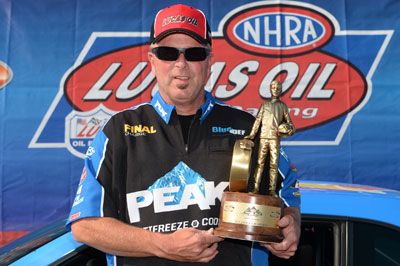 While 100 wins remains his primary target, Fletcher has a few other things on his to-do list, including a long-awaited Super Comp victory. Thus far, he’s won races in Comp, Super Stock, Stock, and Super Gas, but his limited time in the 8.90 class has yet to produce any real dividends.

“Oh, I’m gonna get a Super Comp win," said Fletcher. “I don’t get to race there very often, and when I do, it seems like the car I’m driving is having a bad day, but I’m not giving up. I’m going to run Super Comp at the spring Las Vegas race, so we’ll see what happens. I am definitely not afraid because you’re not going to convince me that Super Comp is any tougher than Stock.”

Fletcher has already won three national championships, two in Super Stock and one in Comp, and he doesn’t actively plan to pursue another, but he does acknowledge that his 2016 schedule has been expanded to include a few more Lucas Oil Series divisional events than normal.

“Whoever is responsible for the trend of putting divisional races on back-to-back weekends with national events deserves a lot of credit,” said Fletcher. “Logistically, it certainly fits my schedule. Early in the year, I can race twice in Phoenix, Gainesville, and Charlotte with a minimal amount of travel. There’s also a back-to-back deal in Brainerd later in the year and a doubleheader [divisional] weekend in Topeka. By then, I should know where I stand.

“The way I see it, I’m good for about another year or two of this. Eventually, I want to cut back some of my deals so I can race maybe eight national events a year or just go race with my kids whenever I want to. It’s kind of like having the guts to go out on the road in the first place; you also need to have the same attitude in order to pull the plug. I basically need to stop talking about it and just do it, but I need to take care of this whole 100 [wins] thing first.”