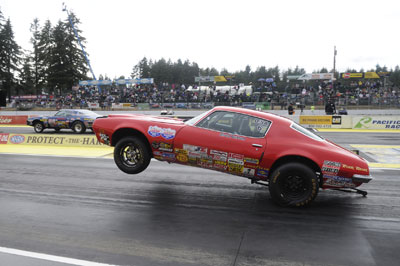 Those who have witnessed either of Brad Burton’s national championship speeches probably already realize that the 2010 and 2012 Stock champion doesn’t mind being the center of attention. With that in mind, it was almost poetic that Burton was the only racer to be crowned in Seattle before the Protect the Harvest NHRA Northwest Nationals presented by Lucas Oil was interrupted by rain and eventually postponed late Sunday. Burton defeated Ryan Warter in the Stock final to claim his seventh career title just before rain hit Pacific Raceways, forcing the remainder of the 12 Professional and Sportsman final rounds to be moved to other events.

“I’ve been fortunate enough to win quite a few races, but I don’t think I’ve ever won one like this,” said Burton. “Had we waited another 30 seconds to run the final, I don’t think it would have happened. The rain was moving in very quickly.”

Burton is a native of Denver but work brought him to the Seattle area six years ago, so he now considers Pacific Raceways to be his home track. As such, the Protect the Harvest NHRA Northwest Nationals title was a big priority.

“Everyone wants to win their home event, and for me, that is now [Pacific Raceways],” Burton noted. “I race there all the time, pretty much every weekend when I’m not traveling, and I’d like to think I have a decent handle on the place. The sun can be a real challenge in the late afternoon because it sets right behind the finish line, so it’s important to know which lane you’re in. A coin toss [for lane choice] might be the difference between winning and losing.”

Eying the big picture, Burton is actively counting points toward what could be a third national championship. Following his Seattle win, he has moved into second place in the Stock standings, although his robust score of 583 points is still well behind current leader Jeff Strickland, who has 656 thanks to a pair of national event wins in the Gray Motorsports COPO Camaro. Burton is still very much in the running for the title, but his success hinges on the upcoming Division 6 NHRA Lucas Oil Drag Racing Series event at Pacific Raceways, an event that will also feature final eliminations from the rain-delayed Division 6 event at Spokane County Raceway last May.

“Basically, we now have three races at my home track, so I need to find a way to perform well,” Burton said. “This [national event win] came in the nick of time, but I still need to win some rounds when we go back in two weeks. I just want to be able to go to the last couple of races in Las Vegas and Pomona with a shot to win the title. That’s about all anyone can ask for.” 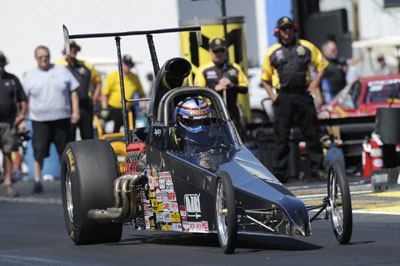 Lucas Oil Series action: Although the remainder of the Seattle final rounds will have to wait for another day, there were plenty of winners crowned last weekend thanks to a pair of Lucas Oil Series events at Atco Dragway and Gateway Motorsports Park in Division 1 and 3, respectively. The results of those two events figure to have strong implications on the ongoing points chases toward national championships.

For only the second time this year, Doug Doll Jr. did not win in Comp but even a quarterfinal loss may not be enough to prevent the former U.S. Nationals Super Comp champ from claiming the national title in Comp. Following the Atco race, Doll has bumped his scored to 644 points and already holds a commanding lead in the class.

I have devoted a fair amount of space in the column recently to Doll and his pursuit of the title, and I feel it’s justified because he’s got the possibility of posting one of the highest scores ever for a Comp driver. At this point in the season, Doll does not have the championship mathematically locked up, but he’s got six wins and still has the possibility of completing a rare perfect season. Right now, second-ranked David Rampy and fourth-ranked Craig Bourgeois, the defending Comp champ, would have to win out just to pass him, and that is assuming that Doll does not add a single point to his total.

Recent St. Louis winner, Troy Galbraith, who is currently third, could only win the title by completing a perfect storm, which includes two Lucas Oil Series wins and two national event wins, including the Chevrolet Performance U.S. Nationals, which offers a 64-car field. Again, that scenario assumes that Doll does not win another round this season, which seems highly unlikely. 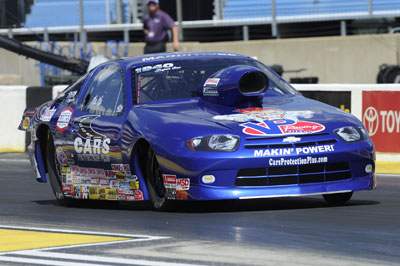 Miss Mia: The short list of female drivers who have won Lucas Oil Sportsman championships includes Amy Faulk and Jackie Alley, who won Super Stock titles in 1979 and 2011, respectively. That club could easily add another member should Mia Tedesco continue her torrid run in Super Gas.

At last weekend’s Division 3 event in St. Louis, Tedesco drove the Hirata family’s CARS Protection Plus entry to the Top Alcohol Dragster title and then finished off a late night with a semifinal finish in her Super Gas Cavalier. Thanks to a successful summer that included both a national and divisional event win at Chicago’s Route 66 Raceway, Tedesco has taken the lead in Super Gas with 611 points. Tedesco will have a chance to improve her score at her next national event appearance, where she will be looking to better a round-two finish. She also has two shots to add points on the divisional level but would need to win at least four rounds at each of them in order for that to happen.

Oftentimes, it takes a score approaching 700 to win a Lucas Oil Series Sportsman title, but it’s worth noting that Jacob Elrod won last year’s Super Gas title with 621 points. Interestingly, Division 1 ace Mike Sawyer finished second with 614 points, and Sawyer is again ranked No. 2 with a current score of 548 and multiple chances to improve.