They say that the measure of a champion is not how they deal with success, but how they deal with adversity, and Steve Torrence and the crew of the now three-time champion Capco Contractors team are evidence of that.
30 Dec 2020
Phil Burgess, NHRA National Dragster Editor
2020 world champion profile 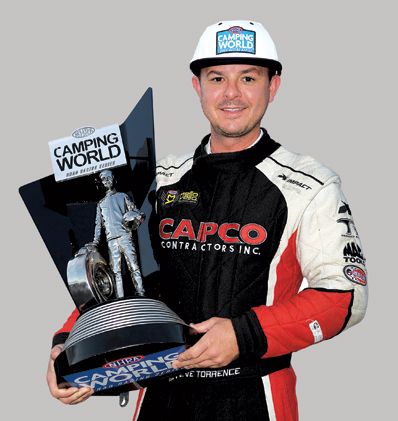 After skipping the season opener in Pomona, the team had wasted no time making up the lost ground by winning in their season debut at the NHRA Arizona Nationals before racing was shut down for four months due to the pandemic.

During the hiatus, Torrence married his longtime love Natalie, and once racing resumed in early July, he continued to make up for lost opportunities, deftly climbing up the standings like Spiderman. On Aug. 9, Torrence and “dem Capco boys” won the Dodge NHRA Indy Nationals, the third straight event of the season at Lucas Oil Raceway at Indianapolis, defeating Terry McMillen in the final.

While the Torrences headed home to Texas, the Indy-based crew soaked in the glory of the win that had carried them to the No. 2 spot in the standings. Then, the unthinkable happened. Team member Dom Lagana, chassis builder Richie Crampton, and crewmember Jake Sanders were involved in a highway accident later that night that left Lagana in a coma with a life-threatening head injury and catastrophic burns.

“It took us to our knees,” recalled Torrence. “We got the call the next morning that there had been an accident and everybody’s in the hospital, and it’s just so bad, and we’re like, ‘Man, I just left those guys.’ [Crew chief Richard] Hogan said it best, ‘You know, 12 hours ago we were on top of the world, and now everything is a ****show.’

“The doctors were saying it’s not good, and that it’s a very, very slim chance that Dom comes out of this at all, let alone normal. We’re all like family; it was just terrible.” 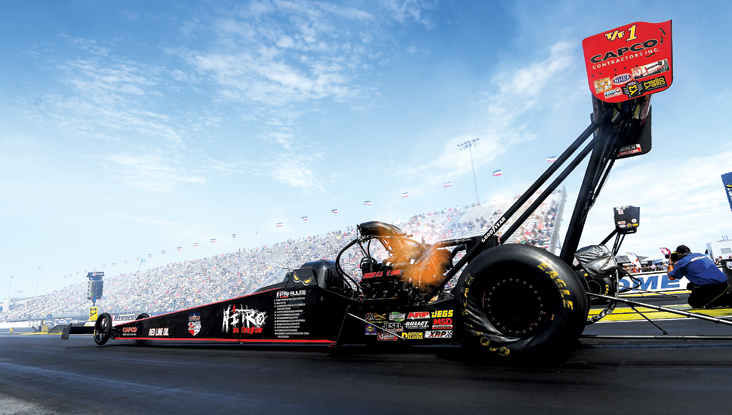 There was a month between that event and the next event, the Denso Spark Plugs NHRA U.S. Nationals, and the crew, led by Dom’s remarkably rock-steady brother, Bobby, prepared with Dom in mind. Torrence himself came up with what he later called “one of the best and worst ideas I’ve ever had,” directing the team to take the Nitro Ninja body panels off of Dom’s personal Top Fueler and put them on the Capco flagship as a tribute. When they unloaded the car in Indy, there wasn’t a dry eye in the pit area.

“Dom is such a huge part of our team and everyone has rallied around him, and the prayers and support in not only our camp but other race teams and fans was amazing. It was very humbling to see so many people were wearing the #LaganaStrong shirts and how everyone came together.

“It’s just so heavy on your mind, and I drove like crap that whole day and got beat by Leah [Pruett] on a holeshot in the semifinals. It wasn’t the best weekend, it wasn’t the worst, but it was a get-healthy weekend for all of us because when we left there, everyone got together, and we said a prayer and talked, and said, ‘Let’s go racing,’ and we’re going to do the best we can, and we’re gonna trust in the Good Lord, and go on, and we did, for Dom and ourselves. It was very emotional, but it redirected our focus.”

From that moment on, the team never looked back. They were in the final round of the season’s last five races, winning two of them, including the next event, the Amalie Motor Oil NHRA Gatornationals, where Torrence beat his father, Billy, in the final round, as he did two races later in an emotional home-state victory in Dallas. By this time, the team was getting an emotional boost that Dom was awake, alert, and FaceTiming the team from his hospital bed, asking to see the tune-up data after each run.

Torrence’s victory at the Gatornationals put him in the points lead he would never relinquish, especially as his main rival, Doug Kalitta, who had led the points since his win in Pomona, began to falter a bit. Kalitta had not lost in the first round all year until he did so in Gainesville and then again at the season finale in Las Vegas, which ultimately sealed Kalitta’s fate and relegated him to his fifth career (and second straight) No. 2 finish.

“They’ve done so well the last few years, and I’m a Doug Kalitta fan,” said Torrence. “I want Doug Kalitta to be a champion; he is a champion, he’s just never been able to get it done, and you feel for him. When he lost in the second round in Houston, he declined the [TV] interview, and I’ve been where he was at, and you just have sympathy for what he’s going through right then, but, on the other hand, I don’t want to be the guy who loses to him either.”

Kalitta’s second-round loss at the penultimate event in Houston, combined with Torrence’s runner-up to Tony Schumacher, meant that Torrence needed to win just one round in Las Vegas, but even that became moot when Kalitta lost ahead of him. 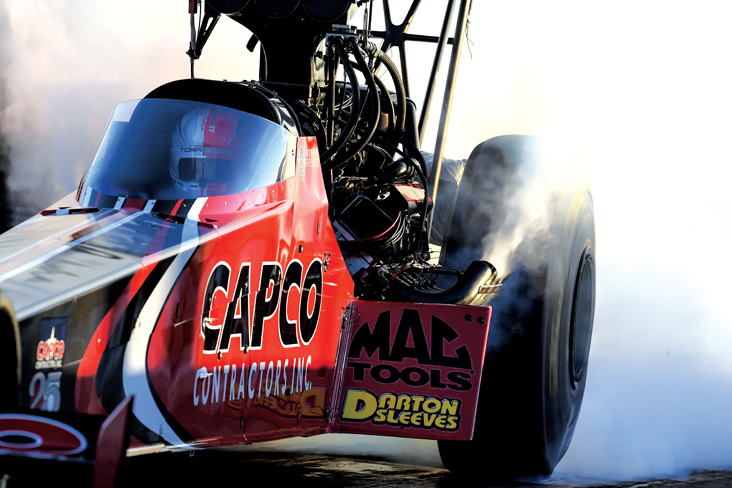 “I slept terrible Saturday night,” Torrence admitted. “I was more nervous than I’ve been all year because that car is very capable of going out and winning the race. If we lost first round and they win the race, they’re the champs. After we won the championship, that was great, but we said, ‘OK, we’re good, but let’s go win the race now.’ ”

Unfortunately for Torrence, he lost the final round on a holeshot to good friend Antron Brown — who had beaten Billy in the semifinals, which also denied the family a 1-2 championship finish.

“I hate losing on a holeshot, but I’m not that upset about it because AB hadn’t won in a really long time,” he said. “But we look back to skipping Pomona — once NHRA announced that there was no Countdown [to the Championship], we were worried that might come back and bite us in the butt, and it could have — because even if you lose first round there, you get 30 points, which would have meant we would have been the champ without going to Vegas and Billy would have been second in points. That would have been pretty damn awesome. 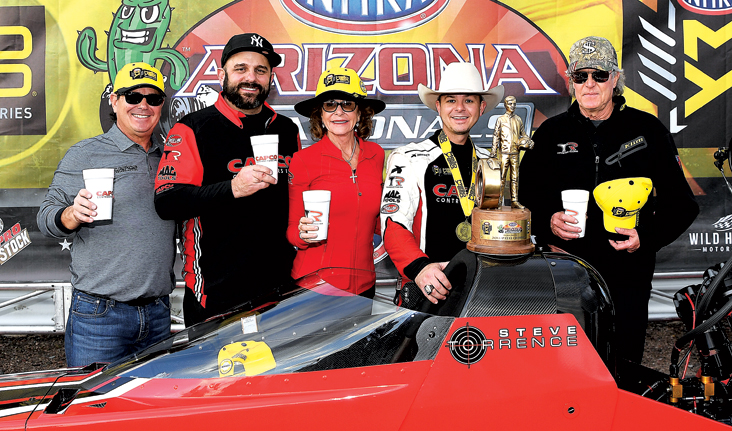 “Still, it all worked out, and I’m proud of this championship. It wasn’t a full season, but it was 11 races, and whoever accrued the most points won. You took every race, every qualifying run, every round, every point — everything counted — and that made it more gratifying that you get to keep that hard work and keep all the stuff that you did all throughout the year, and it’s not gonna just get thrown away and your championship decided on 25% of your season, like we would do in the Countdown. It was a great year, and I’m proud to be the champion again.”

Torrence thanked his parents, “Momma Kay” and Billy Torrence; wife Natalie; Richard Hogan, Bobby Lagana, Justin Crosslin, Mike Wingo, Gary Pritchett, Mike Cleaver, Mike Giaffino, Cale Hood, Kris Martin, and “all of the families of the CAPCO Boys”; Red Line Oil; Mac Tools; Darton Sleeves; and “all of the employees of CAPCO Contractors in Henderson, Texas, that support what we do day in and out.”