The way that Randal Andras explains it, the biggest hurdle for any rider in NHRA’s Top Fuel Harley class is not just that you’re straddling a 1,500-hp, nitro-burning rocket that, for safety reasons, you’re not even allowed to sit on until the engine is running and requires that you wear the racing equivalent of a flak jacket under your leathers. It’s not the fact that the front tire doesn’t touch down until you’re 1,000 feet or more into the quarter-mile run at more than 200 mph, steering and willing the bike with body English to keep it pointed straight.

No, it’s all about “the mojo” that allows you to overcome all of those things and keep the throttle twisted wide open even when your brain is screaming at you to let off. 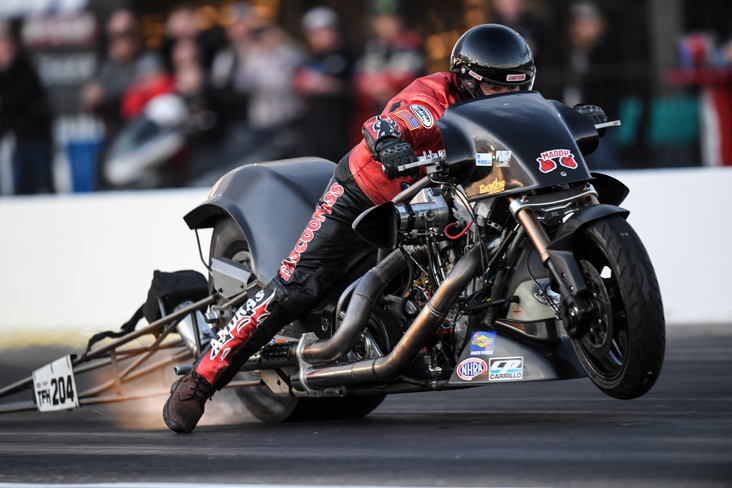 For years, Andras had the mojo and then lost it after terrifying top-end crashes during American Motorcycle Racing Association competition in 2017 and 2018. In 2017, at Beech Bend Raceway Park, the front forks collapsed on touchdown, pitching him off the bike. A year later, at Rockingham Dragway, he looked down for the parachute release on an unfamiliar bike and clobbered the guardwall, again sending him tumbling down the tarmac and, with it, his mojo.

“It was enough to mess with my head and it got to where I was turning out [shutting off] too early on every run, and all the other riders knew that I would turn out early,” he admitted. “It was messing with me bad. Finally, I got to the point where I started saying to myself, ‘Hey man, if you can’t do this, pass the torch.’

“In 2018 and most of 2019, my riding abilities weren’t there, so I started to look at all the things I did wrong, and got back to just watching the light, staying in my lane, and getting to the end first. Once my riding came back, I was able to start drilling the light and racing my own race.”

Andras reached his first final round in more than a year at last year’s Seattle event. Then he won the Top Fuel Harley season-ending U.S. Nationals, where Jay Turner Racing teammate Tii Tharpe also clinched his second straight championship and third in a row for team owner Jay Turner, who won the inaugural title in 2017.

“At Indy, I felt like I had it back: The taste, the feeling, the mojo,” he said. “We always had a decent motorcycle and once I had my mojo back, I knew there was no stopping me.”

And in 2020, there was practically no stopping him. Andras carried that 2019 Indy mojo into 2020 and won the season opener in Pomona and ended up winning six of the eight events in the Mickey Thompson Tires Top Fuel Harley Series, losing only to team boss Turner in Phoenix, where Andras smoked the tires in the semifinals, and at the season finale in Las Vegas, where a broken wrist pin forced him to sit out the semifinals against Turner.

Other than Turner, the only thing to slow down Andras was when racing was halted from March through July due to the pandemic, but he used the time off to good advantage.

“It gave us time to rethink, reboot, and refit, not only in a race frame of mind but a life frame of mind,” he said. “We had to revisit everything, and sure appreciate the people who let us go back and race in those states. NHRA, Mello Yello, Camping World, Mickey Thompson — all of those people have done great things in such a tough time. They made it happen and so my hat’s off to all those guys.”

Once racing resumed, so did Andras’ relentless attack on the championship, winning all three races at Lucas Oil Raceway at Indianapolis — the Lucas Oil NHRA Summernationals, the Dodge NHRA Nationals, and, the granddaddy again, the Denso Spark Plugs NHRA U.S. Nationals — to go 9-0 at Indy, 12-0 dating back to 2019.

He added his fifth season win at the Amalie Motor Oil NHRA Gatornationals to build a pretty much insurmountable lead over his closest rival, team boss Turner.

“In Florida, we felt that the momentum was there to win the championship,” he said. “Our attitude was set, our mojo was back in place, and the motorcycle was performing. It was just like, ‘Get up beside me and we’ll skull drag you.’ Then we go to Ennis [the AAA Texas NHRA FallNationals], at the track where I first started riding for Jay back in 2007 and win the race and the championship. It was just a phenomenal year.

“I had such a great team. Jay is the team captain, but everyone works together. Rex Harris is our tuner and tunes all the bikes and does an exceptional job, along with Mark Connors, and we have different people to help us in different places in the country.”

And, obviously, with a pair of world champs as teammates, the intra-camp competition drove him, too.

“It’s like an old Western shootout — the last one standing wins,” he said. “There’s nobody giving nothing up. There’s nobody that can be bought there. They go for it like a bad habit.” 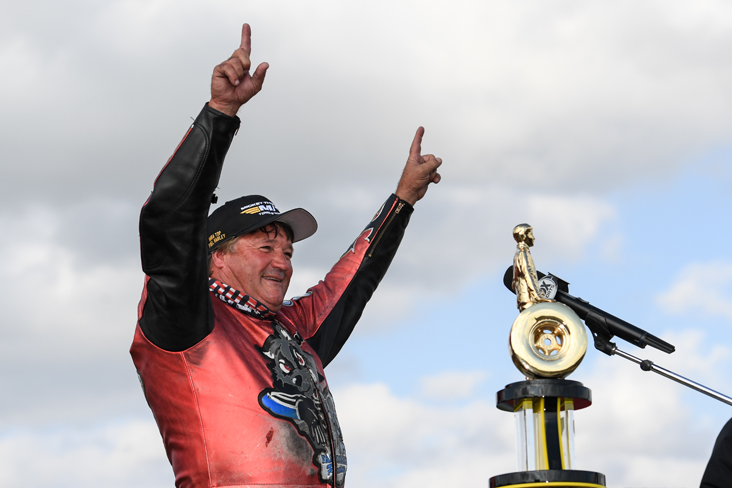 Winning is the habit he wants to continue in 2021, and he’ll have a new bike to do it on in pursuit of the class’ first five-second pass, a milestone that crept into view when Bob Malloy ran 6.09 at the U.S. Nationals and Andras ran 6.15.

“That’s the goal right there: First in the fives,” he stated. “We’ll start 2021 with a brand new scooter and some new parts because we always want to lower the number. We’re heading for a five-second run sometime soon, maybe mid-year or late next year when the conditions are right. We’d love to win a second championship and be the first in the fives. That’s the goal.”

In addition to his teammates, Andras also heaped thanks upon his backers: from Rock Holdings, Joey Carboneal and Teche Towing, and James Bohanna with Time Energy.