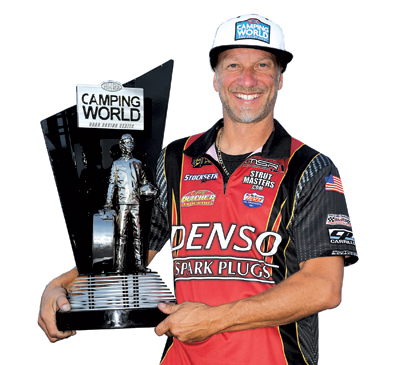 After a disappointing finish in 2019, where he lost the championship largely due to a mechanical failure on the last day of the season in Pomona, Matt Smith entered 2020 with a lengthy to-do list, and by the time it was over, he’d checked off all of the appropriate boxes. Smith’s first priority was to win the championship for the fourth time in his career, and he just did that with a campaign that included two wins and a runner-up finish.

Personal goals aside, Smith also made it clear that he wanted to put both of his teammates, wife Angie and Scotty Pollacheck, into the winner’s circle. He also made that happen despite just eight races in a COVID-19 shortened season. For good measure, Smith also provided the power and the tuning knowledge for Angie and Pollacheck to each earn a spot in the Denso Spark Plugs 200-mph Club. As if that wasn’t enough, Smith also knocked off a $25,000 win in the Mickey Thompson Tires Pro Bike Battle held during the Denso Spark Plugs NHRA U.S. Nationals in Indy.

“We got done everything we wanted to do,” said Smith. “The main goal was to win the championship, but I really wanted to get Angie and Scotty a win. She hadn’t been there in a while, and he’d never won a race, so that was important. Thankfully, we got that done, and then we had the added bonus of putting both of them into the 200-mph Club, so yeah, it was a great year for the entire team. We also put all three bikes into the top five in the points, which I think was also really cool.”

Smith’s Denso EBR has been arguably the best bike in the class for the last couple of years but reliability has sometimes been an issue. His 2019 campaign ended when a mechanical failure cost him the championship in Pomona. Due to the COVID-19 pandemic, the Pro Stock Motorcycle class didn’t hit the track until July at the E3 Spark Plugs NHRA Nationals in Indianapolis, and Smith was in the thick of the fight. After qualifying No. 2, he went to the final round. After a hurried thrash in the pits to replace an engine, Smith’s bike wouldn’t shift in the final, and he coasted across the finish line while up-and-coming Ryan Oehler collected his first win.

“I’m not saying it’s not reliable, but we still have these little stupid problems, and it seems like it’s always my bike and never Angie’s or Scotty’s,” said Smith. “What happened at the first race in Indy was a combination of two things. We broke a rocker arm in the semi’s, and we had 25 minutes to fix the problem. I made the executive decision to swap engines. The problem is the transmission was geared for Gainesville weather and not Indy weather, so it bogged and wouldn’t shift into second gear. That was pretty much my own stupidity, but it was also just Ryan’s race to win.” 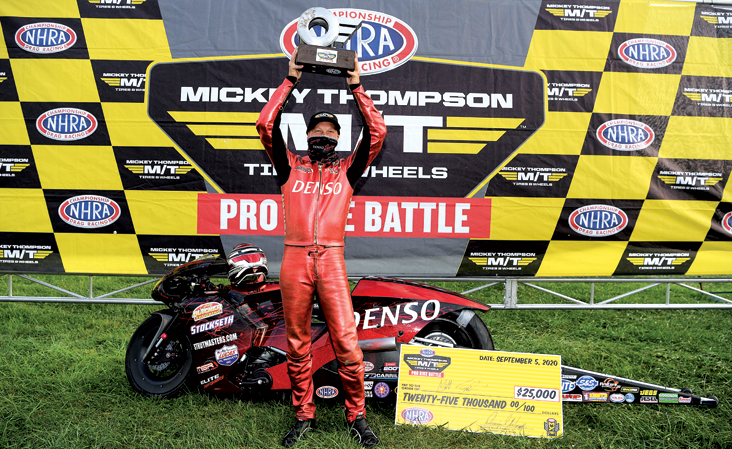 A return trip to Indy a few weeks later for the Denso Spark Plugs NHRA U.S. Nationals resulted in mixed results. Smith again dominated in qualifying and won Saturday’s Mickey Thompson Tires Pro Bike Battle for the second time in the last three years. On Sunday, his shot at a double-up ended in round two against Andrew Hines, but there was still a massive winner’s circle celebration in the Smith pit after Pollacheck earned his long-awaited first victory. By this point, Smith was ranked No. 4 in the standings. His biggest concern was the schedule, which consisted of just five more events.

Smith found the consistency he’d been looking for with back-to-back wins in Gainesville and St. Louis, which was completed in Dallas. He dominated both events by qualifying No. 1, earning the majority of the qualifying bonus points, and setting low e.t. at each race. After winning eight straight rounds, Smith had the upper hand in the championship battle. The outcome became far less certain when Smith got beat by Michael Phillips in the opening round in Dallas. He’d qualified No. 1 for the third straight race but suffered another mechanical issue on the starting line.

“In Dallas, the battery shorted out. That’s a freak thing that’s only happened to me twice,” Smith said. “I thought, if this comes back to haunt me, I’m going to be very upset. Then, in Houston, I ran that 6.72, and I figured we’d be fine. I didn’t need good luck, just no bad luck. In Houston, we broke a toggle switch in the semi’s, and I had that round won. Honestly, I think our team should have won seven of the eight races we had this year. The only race we should have lost is the Indy race that Angelle [Sampey] won. For whatever reason, we weren’t prepared, and it showed.”

By the time he arrived in Las Vegas for the Dodge NHRA Finals, Smith held a generous lead of 78 points over Pollacheck and Harley-Davidson’s Eddie Krawiec, who were tied for second place. Even though the final event of the season featured a points-and-a-half bonus structure, Smith’s lead was more than two rounds, a comfortable, if not insurmountable, margin. The rival Vance & Hines team put forth their best effort to try and stop Smith, including arranging a round-one race between Smith and Sampey. None of it mattered as Smith defeated Sampey and Hines to lock up his fourth title. 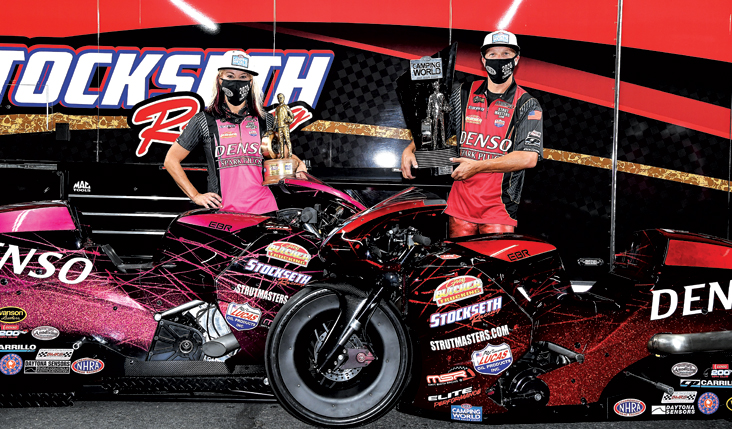 “We felt really good about our chances,” said Smith. “They [Vance & Hines] played the game in qualifying, and it worked because I had to run Angelle in the first round, but it worked out in our favor. I wanted to beat the Harley team, and I beat her and then Andrew to legit win the championship.

“We had a lot of great moments this year even though we only got half the races in,” Smith said. “From a money standpoint, it was great to win the Mickey Thompson Pro Bike Battle, but it was also great to win in Gainesville with Dad. I don’t know how many more times we’ll have a chance to do that. I really owe a lot of thanks to Denso, Mark Stockseth, Lucas Oil, Greg Butcher Trucking, and Strutmasters. They made it happen for our team this year.”