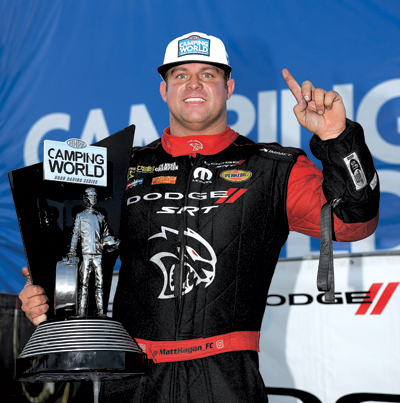 As a guy who rides a tractor when he’s not wheeling his 11,000-hp Mopar Funny Car, the farmer in Matt Hagan is very familiar with the old encouragement to “Make hay while the sun shines.” So, when the two-race-old NHRA racing season resumed in July after a four-month hiatus due to the pandemic, with no idea how much racing would comprise a season that seemed at risk with every new developing COVID-19 headline, Hagan took the old saw to heart.

“You never knew when the season was going to stop, so you had to hustle at every race,” he said. “You had to show up every round and get every point, and you knew that if you lost a race it could be the difference between winning the championship or not, and there was going to be no restart, no do-overs.”

Hagan’s advantage was crew chief Dickie Venables, who had spent the offseason developing a new combination that some of his rival crew chiefs under the Don Schumacher Racing umbrella said would never work. But when they opened the season with a pair of No. 1 qualifying efforts in Pomona and Phoenix, and later showed uncanny consistency, the proof was there as plain as the three Wallys he won in the 11-race season and the third career championship trophy that Hagan hoisted at the season finale in Las Vegas. 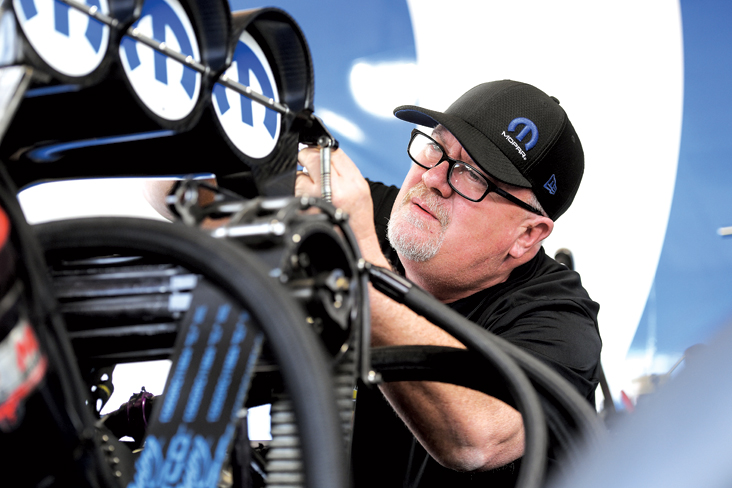 “This is really Dickie’s championship,” Hagan said humbly. “I mean, I dedicated it to my brother, Kyle, who I lost three years ago, but it was also a big win for Dickie. My hat’s off to that guy. We had an advantage pretty much all season long because he came up with a formula that really worked well. We didn’t smoke the tires a bunch and were going down the racetrack and running fast.

“The guy knows how to race on Sundays, and that’s why he’s won so many championships. He’ll come to me and say, ‘Hey, look, man, I know I can run this [e.t.], but if you can leave on this guy with a couple of hundredths or whatever, we’ll go down the track and win this round.’ And we did that a lot.”

The key stat? The Mopar Dodge Charger SRT Hellcat Redeye went down the track in the three-second zone in 25 of its 35 eliminations rounds, including in three of the eight rounds it lost. Hagan lost just once in round one, and that was only because he crossed the centerline while leading Jeff Diehl in Phoenix, a miscue that Hagan owned and had to live with for the four-month racing break until he won in the Return to Racing event in Indy.

Hagan won three times, including twice in the four Indianapolis events, and runner-upped twice as part of a four-car DSR effort that swept all 11 Wallys on the table, an accomplishment no doubt made easier because the championship-winning John Force Racing cars did not return to the fray after the pandemic break, but in Hagan’s eyes, that took nothing away from his individual team or the group’s accomplishments.

“I had a guy reach out and comment that this [championship] shouldn’t count because [John] Force and Robert [Hight] weren’t racing, and I’m like, ‘Show some respect to Kalitta [Motorsports and driver J.R. Todd] and Alexis [DeJoria] and all these other people who showed up and spent their money and time and energy and went through all this stuff in a pandemic to put on a show for these people.’

“To me, this was the most challenging year I’ve been involved in, period, because you have the waivers and you’re getting your temperature taken and you have to be there earlier just to get in the gate, and the masks, and you’ve got 10 [crew] guys sweating and can’t breathe and they’re still wrenching on the cars,” he said. “Even without the Force cars, there’s probably 12 or 14 cars in every field who can win. You take some of these guys lightly and they’ll humble you. I think people lose sight of that sometimes.

“Plus, only having two runs to qualify was super challenging. That [first] run on Saturday was so important and could make or break your weekend because if you didn’t go down the racetrack, you’re backing up trying to get in the field, and basically on Sunday morning you’re running a really hard car.”

His own teammates — Tommy Johnson Jr., Jack Beckman, and Ron Capps — provided his steepest competition, and as the season wore down, it was just the four of them in the dogfight. By the time the season got down to the final two events, in Houston and Las Vegas, Capps’ hopes for a second championship had begun to fade as Johnson and Beckman traded wins and Hagan continued to consistently go rounds, if not to the winner’s circle.

It was Capps who drove a stake into Beckman’s hopes when the No. 16 qualifier defeated the No. 1 qualifier in the first round in Houston, earning a huge top-end hug from a grateful Hagan. Until the last runs of qualifying, Hagan had led the field and was going to have to race Capps in round one, but Beckman took the No. 1 spot from him, much to Hagan’s relief. 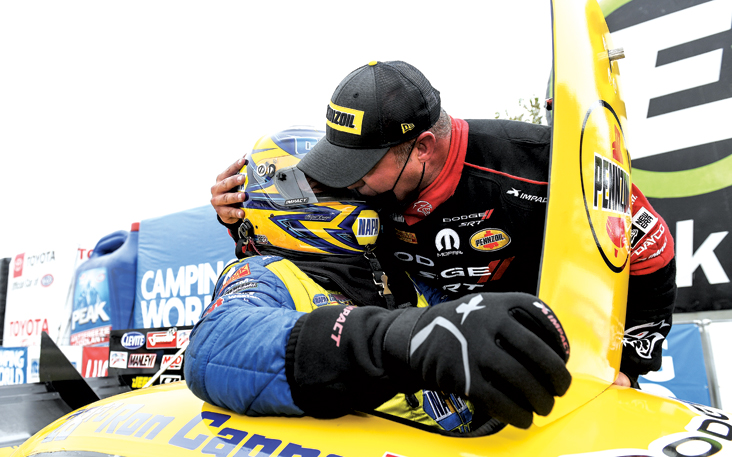 “They did it right in front of us, and I was really glad to see that,” he said. “I’m not sure it was the best move for them to make at the time because we all know how tough [crew chief Rahn] Tobler and Capps can be on race day. So, when Capps beat Beckman, I was just really grateful. Capps was doing Capps for Capps, not for me, but I was so proud and thankful for him doing the job his team expected him to do and being the racer he is.”

Johnson went on to win the race, beating Hagan in the semi’s and Capps in the final, trimming Hagan’s lead to just 42 points entering the season finale in Las Vegas, where bonus points were available, and Hagan was feeling the heat.

“We were leading, but it was points and a half, so we’re really only up one round,” he said. “The first night in Vegas I ordered this expensive filet, and me, I don’t miss no meals, but I couldn’t even choke this beautiful steak down. I was so knotted up in my stomach thinking about it too much.” 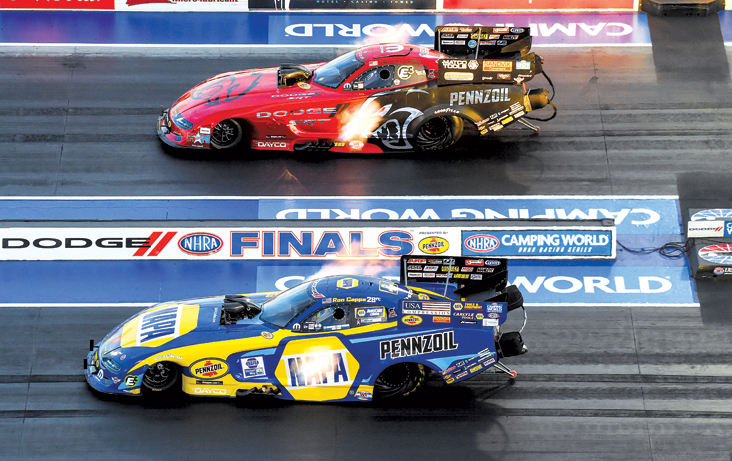 On Championship Sunday, Beckman again lost in round one, narrowing it to a two-horse race, but again it was Capps who rode to the rescue, beating Johnson in the semifinals to secure the championship for Hagan, who put the cherry on top by beating Capps in the final round.

“I’ve been very blessed to be in the hunt every year with Dickie and the team underneath me,” he said. “Any time you’re sitting in the race car that you have a chance to win with on Sunday and a chance to win the championship, how do you ask for anything more? 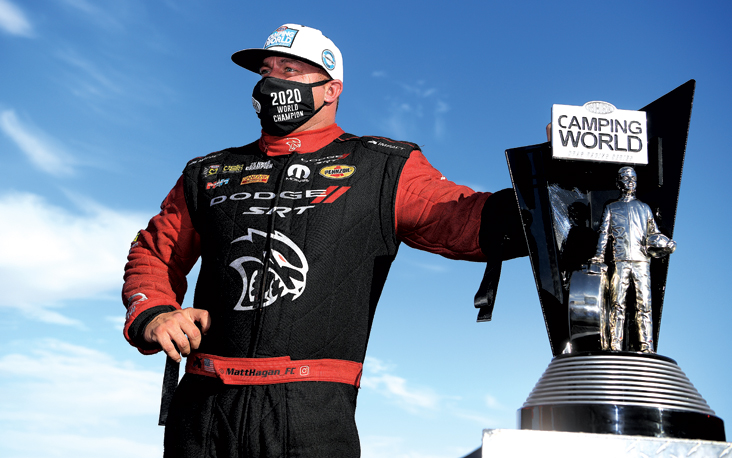 “What I really liked about this year was it was like old-school points system — you show up and good or bad you accumulate the points and then you go home. It showed me how competitive Funny Car still really is; nobody ran away with it.

“Even if we hadn’t won the championship, I was just happy to be out there racing. We made a lot of headway in motorsports because we had fans in the stands and showed we could do it safely and nobody got sick. It showed other motorsports it could be done.”