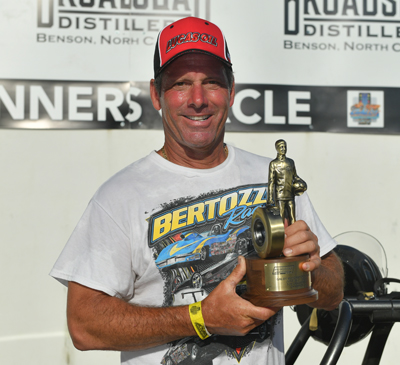 By the time he arrived in Las Vegas for the final events of the 2020 season, Anthony Bertozzi almost certainly felt like a marked man. Entering the homestretch as the points leader in Top Dragster presented by Vortech Superchargers, Bertozzi was forced to dodge one bullet after another as some of the class’ best drivers put forth their best efforts in a late-season bid to overtake him.

Reigning champ Danny Nelson, Art Hoover, and Bradley Johnson were the three drivers who applied maximum pressure but none of them hit the mark. Johnson,  specifically, went on a late-season tear with 16 wins out of 17 possible rounds, but he ultimately came two points short of the title in one of the closest finishes in the history of the class.

“I’ve won championships before. This is my second in NHRA, and I’ve won 16 in IHRA, and I’ve been in some tight points battles before, but I’ve never been in one this close,” said Bertozzi. “Before this, I had never even heard of Bradley Johnson, but he gave it a hell of a run. What he did in Las Vegas was amazing.
“This [championship] was a little bittersweet,” Bertozzi said. “The sweet part is that I’ve got two grandchildren now, and they’ve never been to the races when I’ve done well. Now, my daughter, Brittney, and grandkids come to the races with me and my fiancée, Kathy, and her girls. It’s much more of a family thing. The bitter part is that because of this whole COVID-19 thing this year, some guys didn’t get a fair shot at the championship. I know my score of 546 points normally wouldn’t have been enough to get the job done.” 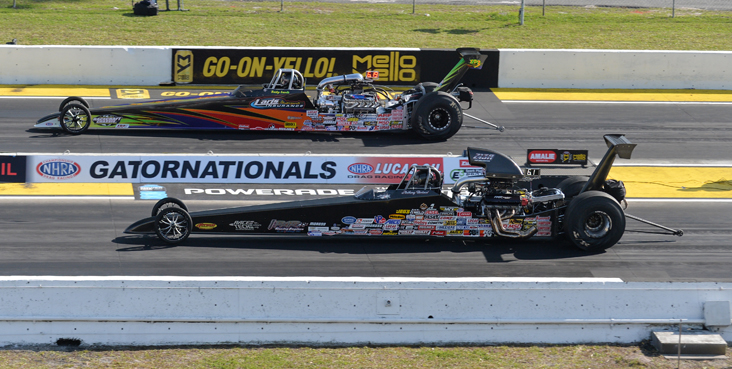 Ironically, Bertozzi wasn’t even in Las Vegas when the title was decided in his favor. Instead, he was boarding a plane to fly from his home in Virginia to Florida when he found out that Johnson lost in the final round of the JEGS NHRA SPORTSnationals.

“When they ran the finals in Las Vegas, I wasn’t going to watch live timing on NHRA.com,” Bertozzi said. “I figured someone would call me no matter what happened. I boarded the plane and decided to look at my phone. They ran all the finals except for Top Dragster when we took off. We got to 10,000 feet and my phone rang. It was [Top Alcohol Dragster racer] Jackie Fricke. She yelled, ‘You won,’ and then the phone cut off. If I didn’t catch that call in mid-air, I’d have to wait two hours to find out whether or not I’d won.”

Bertozzi won the NHRA Lucas Oil Drag Racing Series race at GALOT Motorsports Park and then cemented his status as a championship favorite after he visited National Trail Raceway for the doubleheader weekend that included the Division 3 race and JEGS SPORTSnationals. In Columbus, he won nine of 10 possible rounds with a runner-up. Bertozzi left Columbus as the points leader and made up his mind to see the battle to the finish. 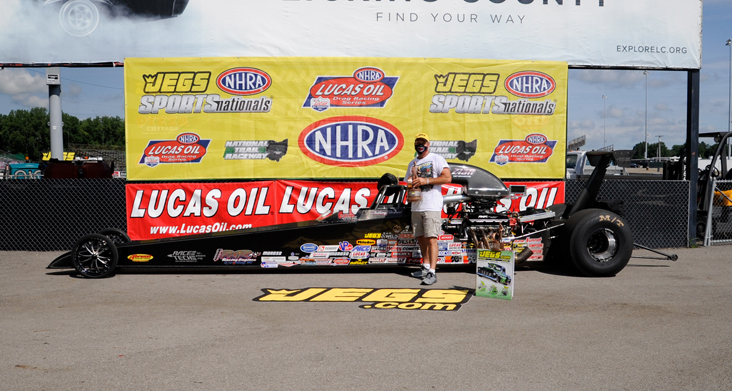 “I felt good about the championship after GALOT, but Columbus was definitely the turning point,” Bertozzi said. “I wasn’t event going to Columbus, but after COVID hit, I knew I had to get my races in wherever and whenever I could. I told myself I was going to be there every time they opened the gate.”

While his ProCharger-equipped dragster was nearly flawless in 2020 with consistent 6.1-second runs at more than 230 mph, the same couldn’t be said for his motorhome, which broke down at midseason, nearly causing him to abandon the title chase.

“I really have to thank Jeff Pittman at Hickory Trailer Sales because he bailed me out of a tough spot,” said Bertozzi. “The transmission in my motorhome went out in June, and Jeff loaned me a new motorhome until he fixed mine. It turned out to be a much bigger deal than we first thought, and I used a borrowed rig to go to Epping, Columbus, Indy, and all the way to Vegas. I almost gave up on the season, but I’m glad I didn’t. It worked out for Jeff, too, because I just ordered a new motorhome from him.” 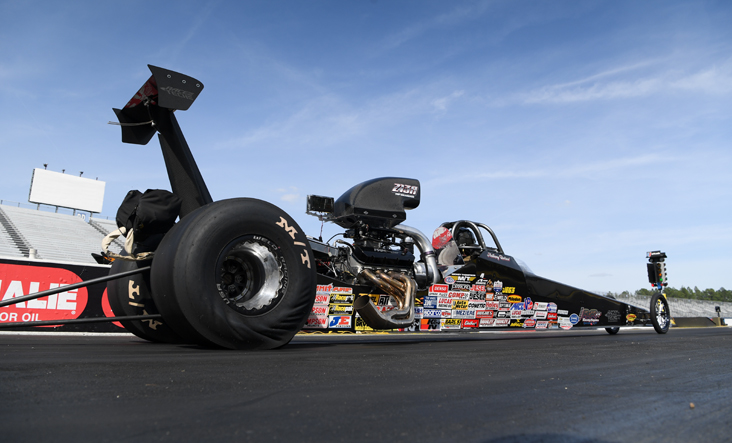 With a second title now secure, Bertozzi has the added comfort of knowing that he can race in any NHRA national event in both Top Dragster and Super Stock, regardless of his grade-point status. That gives him greater flexibility to pick and choose the races he attends.

“I’ll still run some of the points meets early in the season and then see where I’m at in the points,” he said. “I used to race three days a week when I was younger, but I can’t do that anymore. The lack of seat time hurts me a little bit, but I’ve got a good balance in my life between racing and my family. I have to thank my crewman, Phil Ivey, he does a great job; and my teammate, John Labbous Jr.; as well as my daughter, Brittney; grandkids, Eva and Stella; my fiancée, Kathy; as well as Scott Duggins, Mickey Thompson, RaceTech Chassis, and Biondo Race Products.”