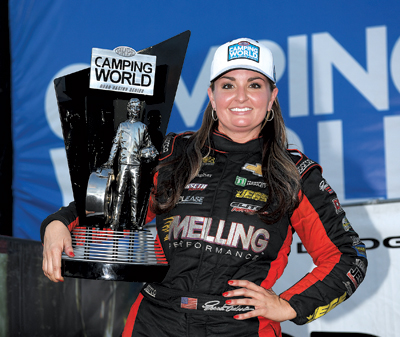 The list is fairly impressive, and it includes Bob Glidden, Warren Johnson, Jeg Coughlin Jr., Lee Shepherd, Greg Anderson, and now, Erica Enders. Those are the only NHRA drivers who have won four or more world titles in Pro Stock. Enders became the latest to earn that honor when she successfully defended her 2019 title. She has also won more NHRA titles than any other female racer, breaking the tie that existed with three-time champions Shirley Muldowney and Angelle Sampey.

Enders maintains that her 2020 season was far from perfect, but that narrative only goes so far. Statistically, it may actually have been one of her best campaigns. In a season shortened to just 10 races due to the COVID-19 pandemic, Enders went to four final rounds and won all of them. She also tacked on three semifinal finishes and, perhaps more importantly, didn’t suffer a single round-one loss. In a season that did not include a six-race Countdown to the Championship, that sort of consistency played a key role in her championship effort.

“I believe I did struggle,” said Enders. “I’ve just had a hard time being the same person I was in 2015 when I felt 10 feet tall and bulletproof. It’s been a work in progress to get back to that point. I’m certainly not trying to be negative because we accomplished a lot this year, but we’re better than we showed. Deep down, I want to be the best ever. In high-pressure situations, I feel that my team and I are great together. My guys always rise to the occasion, and when they do, I also want to rise to the occasion.” 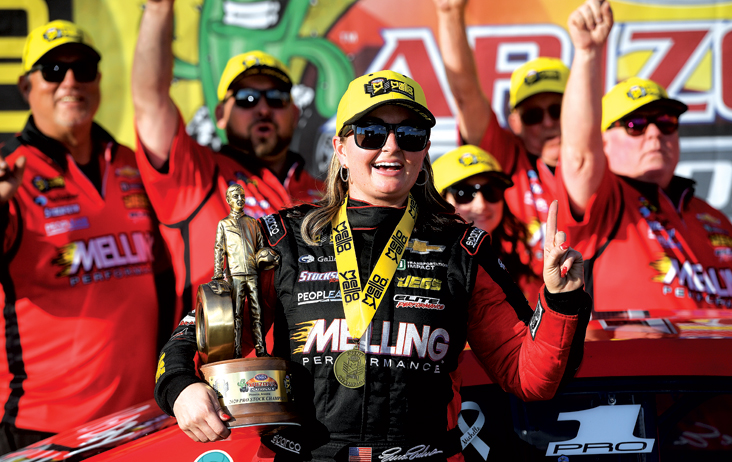 Carrying the No. 1 on her Melling Camaro, Enders rolled into Auto Club Raceway at Pomona for the first event of the 2020 season and came away with a semifinal finish. Two weeks later, she hit the pay window in Phoenix. From that point forward, she was never ranked lower than third in the points standings. Momentum for everyone in the sport slowed in March when the NHRA season was paused due to the pandemic. With no Professional racing for the better part of four months, Enders and her Elite team managed to stay busy working in their shop and testing whenever possible.

“Even at the start [of the pandemic], work at the shop was the same,” said Enders. “We worked not only on the race program, but just to maintain the business and keep all the balls bouncing. Thankfully, Richard [Freeman, team owner] is a great leader, and everyone on our team pulled their own weight. We did do a lot of testing, and I got to run the Comp car, which was enough to hold me over until we got back to racing.” 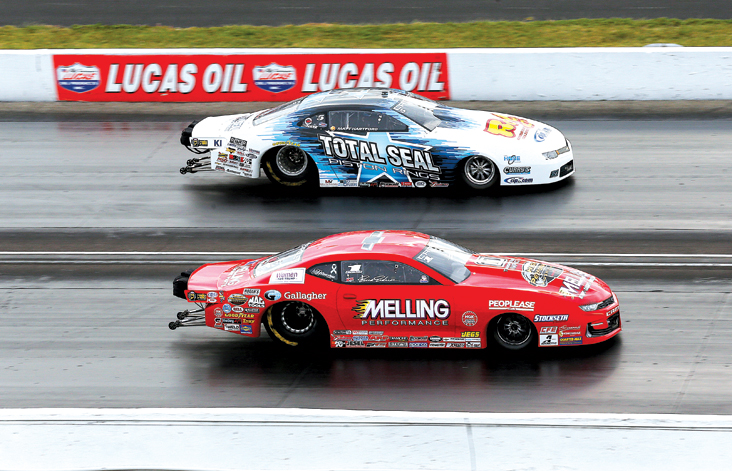 When NHRA resumed, the schedule for Pro Stock included three events in Indianapolis. Following a semifinal and a quarterfinal, the third time was the charm for Enders when she won the Denso Spark Plugs NHRA U.S. Nationals. Any win in Indy is big, but this one was special. A year earlier, Enders lost the Indy final to teammate Alex Laughlin when she suffered a mechanical failure. That loss put a chip on her shoulder, and she committed herself to redemption in 2020. That became a reality when she beat Matt Hartford in the final round. The win was not just good for the soul, but also moved her from third to first in the hunt for the title.

“The Indy win was definitely huge, not just for redemption from what happened in final in 2019, but also being able to win the U.S. Nationals for a second time,” said Enders. “That means a lot to me. I’m thankful for the fact that we got 10 races in, and it was cool to be able to race in Indy a few times. When we came back for the U.S. Nationals, I wasn’t sure if it would feel the same, but it was still the special event that we all know it to be.” 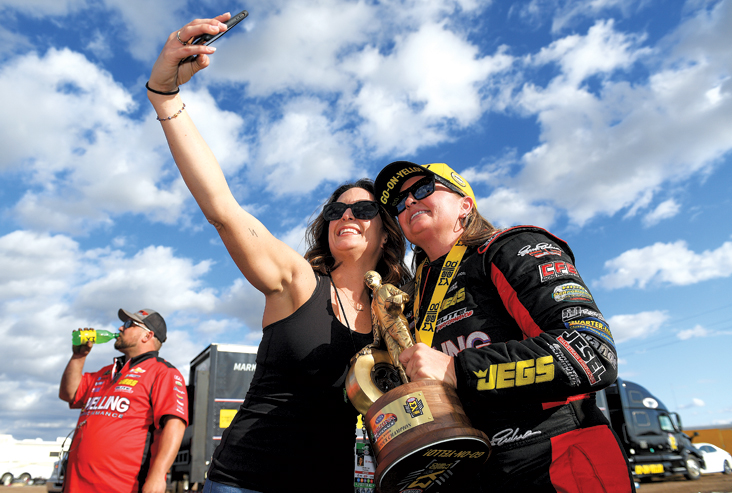 Enders took over the points lead for good following her win at the Mopar Express Lane NHRA Midwest Nationals in St. Louis, an event that was moved to Dallas for weather-related issues. There, she defeated KB Racing rivals Anderson and Jason Line in the final two rounds to seal the victory with three events remaining in the season.

Heading into the Dodge NHRA Finals in Las Vegas, Enders held the lead, but a fourth championship was far from a given because her teammate Coughlin and Line were in the hunt. The bitter fight to the finish that many had expected never materialized. In a truly shocking development, Coughlin dropped his round-one match against rising star Aaron Stanfield. Line also sustained a rare early loss when he fell victim to Cristian Cuadra’s nearly perfect .002 light. Enders watched in disbelief as the events unfolded in front of her.

“When I saw Jeg get beat on a holeshot, my jaw hit the floor,” Enders said. “Then my sister [Courtney Enders] opened the door and stuck her head in the car and said, ‘This is gonna happen right now.’ I try to always be positive and optimistic, but I thought there was way no way the stars were going to line up. I was thinking I’d have to race Jeg in the semi’s, and maybe Jason in the final, and we’d have to scratch and claw until the bitter end. It was surprising to have that weight off my shoulders.”

With a fourth title secure, the list of things Enders hasn’t done in racing is far shorter than her vast catalog of achievements. Of course, a fifth title would be the goal in 2021, but she has already secured her spot as one of the class’s all-time greats. When NHRA does return to action in March, the Pro Stock class will also look dramatically different. Coughlin and Line, along with 2017 champ Bo Butner, have left, leaving Enders as one of the class’ veterans with nearly 300 starts. At the same time, an influx of new blood, including Stanfield, Troy Coughlin Jr., Mason McGaha, Cristian Cuadra and Fernando Cuadra Jr., and Kyle Koretsky, are prepared to take the class into the future.

“We’ve accomplished everything we set out to do and more,” said Enders. “I would like to become the most successful female, but Angelle has set that bar pretty high with 43 wins, and I’m sitting on 29. It’s OK if I don’t get there, I’ve had a blessed career. For now, we’re going to keep rolling. We’re fortunate to have support from Melling and Gallagher, so we plan to just keep winning races and winning championships. As a team, we clearly have some work to do in horsepower department, especially after getting our butts kicked by five-hundredths in Las Vegas by the KB guys, but I feel like everything is on course.”