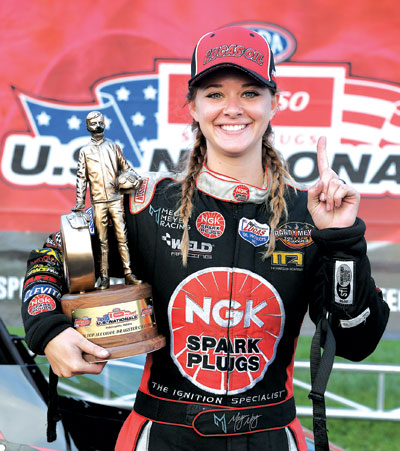 As hard as it is to believe, the second straight world championship that she could claim by lighting the win light in the final round of the season-ending Dodge NHRA Finals in Las Vegas was not even the last thing on Megan Meyer’s mind as she staged. In fact, it wasn’t on her mind at all.

Even though more than a year had passed since she had privately decided to retire from driving at the end of 2020 — although the official announcement did not come until this September, she made her decision after her July 2019 engagement — the thought of staging her NGK A/Fuel Dragster for her last ride got to her as she prepared to take on former four-time world champ Joey Severance with the fate of her final season in the balance.

“I honestly was just trying not to cry,” she admitted. “I was thinking, ‘Oh my gosh, this is the last run I’m gonna make in this car, and I have no idea if I’ll ever be back,’ and I kinda got out of my routine. I staged early while Joey was still revving it up, and it gave me some time to think, and I was just looking around at the racetrack and the finish line and thinking, ‘Oh my gosh, this is it,’ and then I heard him leave, and I was like, ‘Oh crap, I should probably go.’ ” 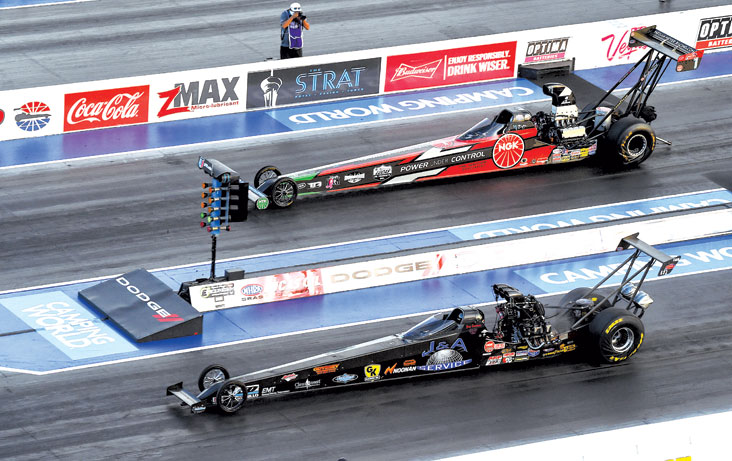 You could probably excuse Meyer’s state of mind after a whirlwind three weeks in which she won the AAA Texas NHRA FallNationals in Dallas to take the points lead, then got married the next weekend — flying home to her wedding only after qualifying for the field in Houston Friday to earn 31 valuable points — and then flying to Vegas where she had to win the event to prevent Shawn Cowie from taking the crown from her.

Cowie, who had won the Houston event in Meyer’s absence to take her points lead, had lost to Severance in the semifinals in Las Vegas, but if Severance could beat Meyer, Cowie still had the chance to retake the lead at the Las Vegas regional event the following weekend, so he offered his engine to the Severance team, who had blown up their engine in beating him. Meyer’s crew — per her traditional request — didn’t burden her with that championship drama before she raced Severance.

For a while, it looked like Cowie’s plan might work. While Meyer was distractedly late with a .176 reaction, Severance shot from the gate with a phenomenal .015 light, but Severance’s mount quit before half-track, and Meyer screamed past to take the victory, not yet comprehending that she’d also won the championship.

“I saw him way out there, and I was just like, ‘I just screwed everything up. I just ruined it, and I’m gonna end my career on this, and everyone’s gonna remember it, and I’m never gonna live it down.’ I started chasing him and then he just disappeared.

“As soon as my win light came on, I pulled the parachutes and started crying,” she said. ”The [top-end official] told me, ‘OK, go over to the stage and Glen [Cromwell, NHRA president] will hand you your Wally,’ and I said, ‘I already have the Wally,’ and I was like, ‘Wait, what are you talking about?’ And he said, ‘He’s going to shake your hand and give you the other trophy,’ and I was like, ‘Wait. You mean we won both?’ It was incredible.” 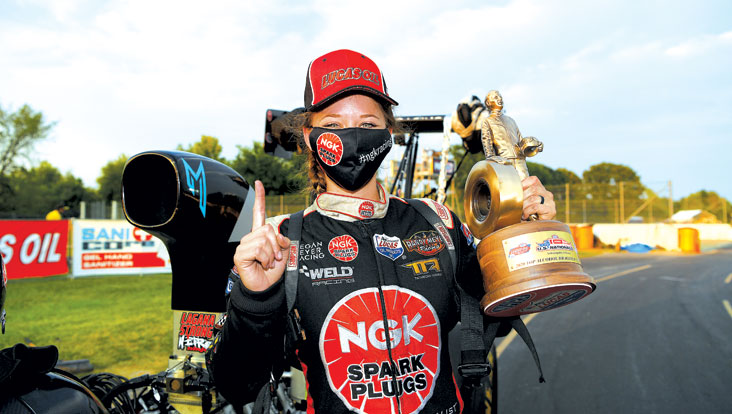 Meyer had put herself into position for the championship with a pair of regional wins early in the season, and won the Denso Spark Plugs NHRA U.S. Nationals in her national event debut, winning the sport’s biggest event for the second straight year and making the two quickest passes in class history, 5.097 and 5.090, to set the national record.

“It’s amazing to win Indy and then to break the record at the same race is just unheard-of,” she said. “I don’t even think the conditions were perfect for us to be able to run that fast, but the car was just happy, and everything was just going right.”

The season was not without struggles as offseason development work gave them more power than some tracks could hold, resulting in a season-long too hot/too cold/just right battle. After testing during the pandemic break, they won the Texas Motorplex Central Region event and the North Central Region event at National Trail Raceway, then won the U.S. Nationals and the FallNationals in her return to Texas Motorplex in mid-October.

Then there was the matter of her wedding, originally scheduled for April but moved to late October because of the pandemic. At the time she booked Oct. 25 on her calendar, the Houston event had not been put back on the schedule after being postponed from its original April date, and the entire schedule was in a constant state of flux.

But after her win at the FallNationals put her into the lead and the prospects of a repeat championship became real, she knew she had to at least qualify for the Houston event to earn some points. 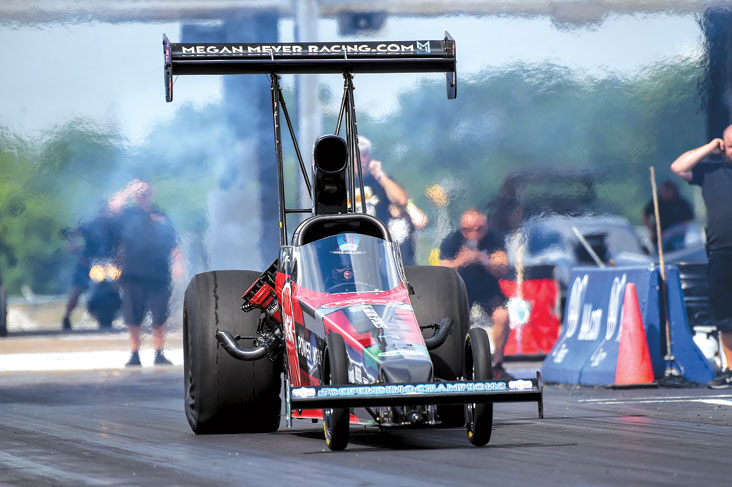 “I was only supposed to be there for a few hours to make the one qualifying run to get the 30 points and then fly home Friday night, but it rained and I missed my flight,” she said. “We made the run late Friday and got the first flight home Saturday morning just in time to go to the rehearsal, got married on Sunday, and then went to Vegas the next week, won the race and the championship. It was just crazy.”

Meyer’s mic-drop win cuts short one of the most meteoric careers in recent memory, but she rides off into the sunset to face new adventures with husband Adam.

“I’m going to focus on my other hobbies ­— hunting and fishing, hiking, and mountain biking — and we’re trying to start a family,” she said. “I might do a little bracket racing in my sister’s Super Comp car until we’re pregnant.

“I’m excited to be back on the crew side where I spent my life watching my dad drive and just helping him out and to be on the starting line, celebrating with the crew. I miss that part of it. I will be doing social media stuff for our team and a couple of other racers, too, so you’ll still see me around at some races.”