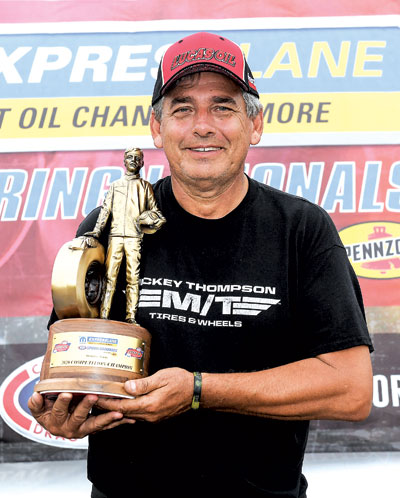 The spring of 2020 was not kind to Craig Bourgeois. After finishing second behind Frank Aragona Jr. in 2019, falling just short of winning what would have been his second NHRA Comp world championship, the Louisiana veteran opened his 2020 campaign in his home state with a devastating first-round loss the first week of March at the Division 4 NHRA Lucas Oil Drag Racing Series event at No Problem Raceway Park.

Far from being “no problem,” his vaunted B/Nostalgia Dragster was seriously down on the horsepower.

“It was terrible; we had no power, and we qualified in the bottom half of the field,” he said. “There was something seriously wrong with the motor, and I didn’t know what.”

With his local dyno down, Bourgeois loaded up and headed to see Jim Evans at RCE in Missouri to use his dyno. After a weekend working together, experimenting with manifolds and nozzling, by the time he headed home, they’d found nearly 50 hp.

Then Bourgeois faced his toughest opponent of the season: COVID-19. Racing had already been halted by the pandemic, and Bourgeois nearly became one of its other victims.

“I got COVID sometime in April; I was down for about 13 days,” he said. “I had a mild fever for 10 or 11 days, and there were a couple of days that were so bad that I had to go to the hospital to get an IV because I was so weak. If there was a good time to get it, it was then, because there was no racing. If that happened later in the year, I might not be the champion.”

Bourgeois and his blue digger were both back at full strength when Division 4 resumed at Tulsa Raceway Park in early June, and Bourgeois collected the win, his first of four divisional wins. By the time he ran his first national event of the season, the NHRA U.S. Nationals in early September, he’d added another Division 4 win at Alamo City Motorplex, and then had a spectacular weekend in Indy. 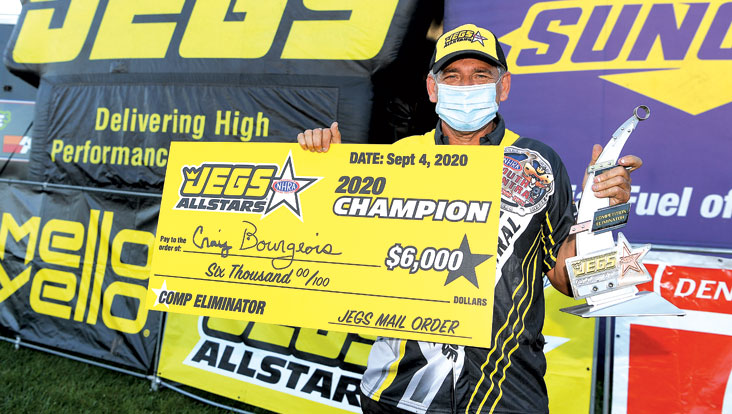 It started with a “bucket list win” in the JEGS Allstars competition on Friday and almost ended up with another celebration Sunday, but a .66-under pass to get by Terry Smith in round three proved his undoing. A fortunate quarterfinal red-light by past Indy champ Greg Kamplain and a semifinal bye got him to the final round, but he didn’t have enough index left to beat Jason Coan.

The .66-under pass crippled the B/ND index, forcing him to switch to A/Nostalgia Dragster even though his A/ND engine — which benefits from a different cylinder head and intake manifold — was not ready. Despite running his B engine in the A class, he doubled up at the Texas Motorplex Division 4 event to boost his world championship hopes, although threats still loomed from reigning champ Aragona and Doug Engels.

“Doug Engels really looked like the guy who was going be impossible to beat: Good driver, good car, just a lot going for him, but he made a little mistake in St. Louis and crashed his car,” said Bourgeois.

Although he and everyone else didn’t realize it at the time, Bourgeois clinched the championship with that victory.

“We were surprised we beat Frankie in the final; he had a pretty good performance advantage on me,” he remembered. “We had actually penciled ourselves in as runner-up, and if we had lost the final, with a little success in Las Vegas, Dougie could have easily passed us, but we won the race instead.

“We didn’t know we had won the championship. I didn’t know if we should turn east and go home or turn west and go to Las Vegas. My statistician, Gregory Shenk, was trying to run all of the numbers and possibilities as we were driving home and told me, ‘I don’t think anyone can catch you; I think you just won the championship.’ I was driving the rig and couldn’t wait to get home and do the math myself, and once I did, I knew we had it.

“It was a great year; we were just so blessed. We had our fair share of luck and, believe me, you need it to win championships, and you need good people, which I definitely had. I want to thank Mickey Thompson Tires, A-1 Performance, Federal-Mogul, Fel-Pro, Rolla Competition Engines, Stanfield Racing, Elite Motorsports, Hayden Wheels, Total Seal, Just-N-Time, Lucas Oil, and Haase Race Cars, and the people who have been a constant help throughout my career: Marv Ripes, Joe Martino, Chuck Haase, Kevin Duet, Barbara Noto, Kelly and Mark Jones, Kirk Bienvenu, Paul Kimble, and my crew chiefs Greg Schenck and Jimmy Dunn, and also my family: Jennifer, Danielle, and Dominique, and my wife, Cathy. I would also like to dedicate this championship to JoJo Sherrill and Tippy Mistric.”