For the last six years, Doug Gordons has been in the Top Alcohol Funny Car championship discussion but never won the title. That all changed in 2020.
24 Dec 2020
Phil Burgess, NHRA National Dragster Editor
2020 world champion profile 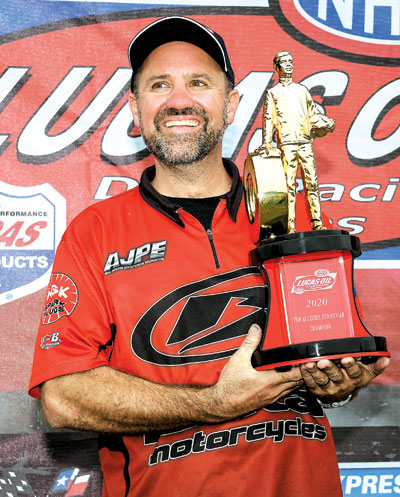 The last place that Doug Gordon and his father, Mike, wanted to be at the late-season Mopar Express Lane NHRA SpringNationals in Houston was at the top end, with TV cameras trained on them as they waited to see whether points rival Sean Bellemeur and the two-time and reigning world champ Bartone Bros. team could win their semifinal race. Doug was already out of competition, and they needed a Bellemeur loss to clinch their first championship.

For the last six years, the Gordons have been in the championship discussion but never won the title, finishing second and third on numerous occasions, drawing inevitable comparisons to Top Fuel’s perennial bridesmaid, Doug Kalitta.

So, with vivid television memories of a crestfallen Kalitta after Tony Schumacher lowered the boom on his championship hopes with “The Run” in 2006 in Pomona, you can understand their reluctance to be on camera.

Recalls Mike, “My dad didn’t even want to go down there; he said, ‘We’re just gonna look like idiots.’ We ended up going down there, but we didn’t feel great about it.”

But when Steve Boggs and Bartone crew shockingly couldn’t get the usually consistent mount to fire against Chris Marshall, the Gordons were glad to have made the trip. Within minutes, Doug was hoisting the championship check and celebrating a long overdue first championship with his family.

“We had all those runner-ups for the last few years, and for whatever reason, this year, things went our way when we needed them to,” he said. “I felt bad for Sean and didn’t want to go down like that, but at the same time it was just huge; we were all crying.”

The end of the 2020 season was a 180-degree turn for the Gordons from the way 2019 ended, which was with a scrap-metal collection of a race car after Doug lost the handle on a qualifying run in Las Vegas — “Just a bad driving job by me,” he admits — and destroyed the car in a top-end flip. They quickly commissioned Jonnie Lindberg to build them a replacement for 2020.

The team also was buoyed by the pre-crash signing of Beta Motorcycles as a new sponsor for the 2020 and 2021 seasons. Beta produces motorcycles in Italy but ships them in the U.S. through a distribution center in the Gordons’ Paso Robles, Calif., hometown. Tim Pilg, the head of Beta USA, had taken note of the success of his neighbors and, seeing the prolific TV coverage, thought that NHRA might be a way to build better brand awareness for Beta. 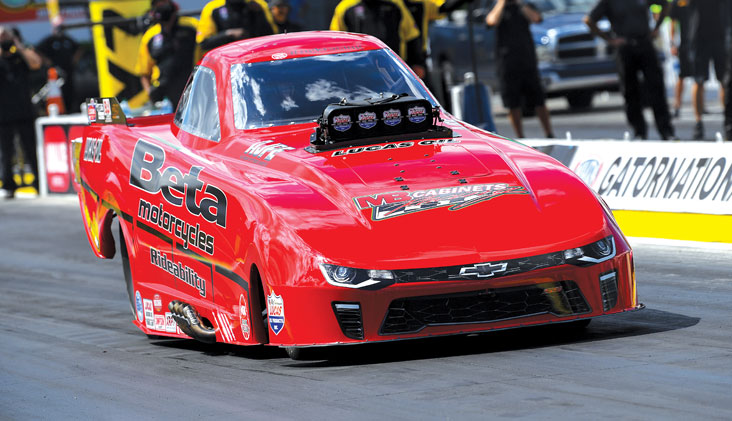 They did just that immediately, opening the year with a runner-up at the nationally televised Winternationals then drove cross-country to compete at the Amalie Motor Oil NHRA Gatornationals in Florida and the regional event the week prior. They won the regional, but the Gatornationals and the season were put on hold by the COVID-19 pandemic, sending them home.

“We knew we had a good car, and we wanted to race and wanted to get more coverage for Beta, but there really was no racing on the West Coast, so we knew we’d have to travel, to go wherever the races were at,” Doug said.

That included winning trips to regional events in Denver and Topeka to go with a “home” win in Sonoma, that earned them the West Region championship before the Top Alcohol Funny Car national event schedule resumed at the Denso Spark Plugs NHRA U.S Nationals in September.

“It always seemed achievable for us to win a regional championship, but the national championship has always been more of a dream goal,” he admitted. “Once we had the region locked down, we were watching points every day, and I’m waking up in the middle the night trying to recalculate points so, yeah, we definitely began thinking about [the world championship] while trying not to let it overwhelm us.” 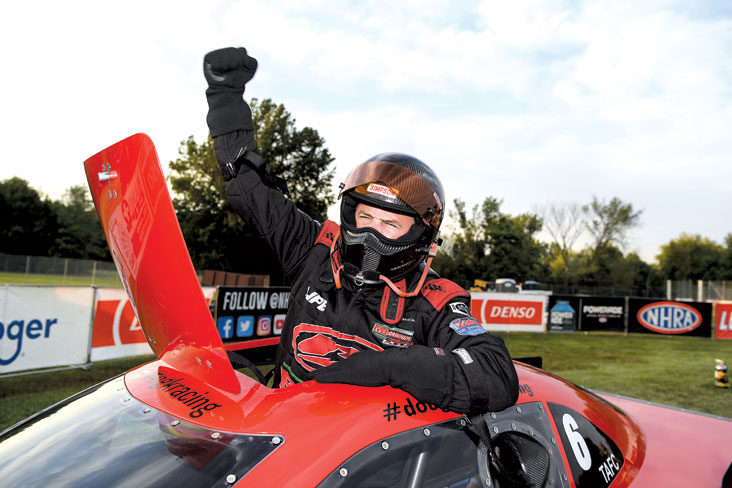 The Gordons’ first national event outing since February was a huge success not only because they won Indy for the first time, defeating championship rival Brian Hough in the final, but because Sean Bellemeur was upset in round one by Lindberg. And, because alcohol racers could claim points at only six of the seven national events in this shortened season, and Bellemeur did not attend the Winternationals, he had to eat the first-round loss.

“We felt like we had a pretty good advantage because he had to claim every national event he ran, and we could still use one drop if we needed it,” said Gordon. “As soon as Sean lost, my legs started shaking. I was thinking, ‘Oh my gosh, this is so huge. Don’t screw this up. If you’re going make this happen, this has gotta be the start of it,’ and we ended up winning the race.”

Gordon reached the final of the Amalie Motor Oil NHRA Gatornationals, too, but lost there to Bellemeur, and the two locked horns again in the final of the AAA Texas NHRA Finals in Dallas, where Gordon scored a huge win.

“In my opinion, Dallas was the clinching point. We beat Hough in the semifinals to knock him out of the championship and then Sean in the final. Honestly, that final felt five times bigger than winning Indy. That was one of the most emotional and biggest round-wins in our careers and put us in the major driving seat.”

Bellemeur still had an outside chance but needed to win the final two events of the year and stop Gordon from reaching the final of either. He got half his wish when Gordon had to shut off in round one in Houston when his car got out of shape.

The Gordons watched anxiously from the sidelines as Bellemeur continued to go rounds until being stopped by breakage — a broken mag rotor tip – sealing the title and allowing the Gordons to go to the season finale in Las Vegas with no pressure and a lot of celebrating.

“We didn’t realize how many people were rooting for us or just were so happy for us,” he said. “Being ‘home’ and with no pressure, we had the chance to really enjoy it and even had champagne Friday night to celebrate.”

In addition to his parents, Mike and Cheryl, Gordon praised the help and support of his wife, Christina, daughters Maddi and Macie, and car chief and clutch man Rick Wilkinson, as well as sponsors Beta Motorcycles, Lucas Oil, NGK, and the family business, Morro Bay Cabinets, and the technical help of AJPE, Bullet Cams, and B&J Transmissions. 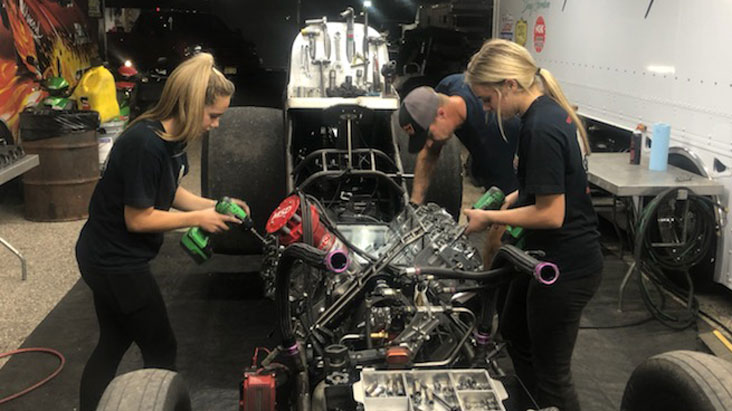 “It’s really something for a small team like ours to beat Bellemeur and those guys. Sean’s probably the best driver out there, Boggs is definitely the best tuner, and they have an owner with a lot of money. We’re just a little cabinetmaker family that brings their two daughters to do the motor work and it’s Mike and Doug basically doing the tuning with Rick as our mediator.

“I can’t wait to see a number one on the car. We’re working on some new tricks over the winter and trying to make some more power and see if it could be a little bit faster and maybe even be a little bit better.”