Forged from the Southeast’s grudge-racing world, Stevie “Fast” Jackson’s mixture of performance, self-promotion, and maniacal work ethic have produced back-to-back championships in the E3 Spark Plugs NHRA Pro Mod Series presented by J&A Service. History will remember his 2019 championship for how dominant his effort proved to be, while 2020’s title will be seen as testing his mettle. With only seven races in the condensed season, a series of unexpected struggles, and five other racers with a viable shot at the title going into the final race of the year, it was Jackson and his larger-than-life personality who still managed to rise above them all. 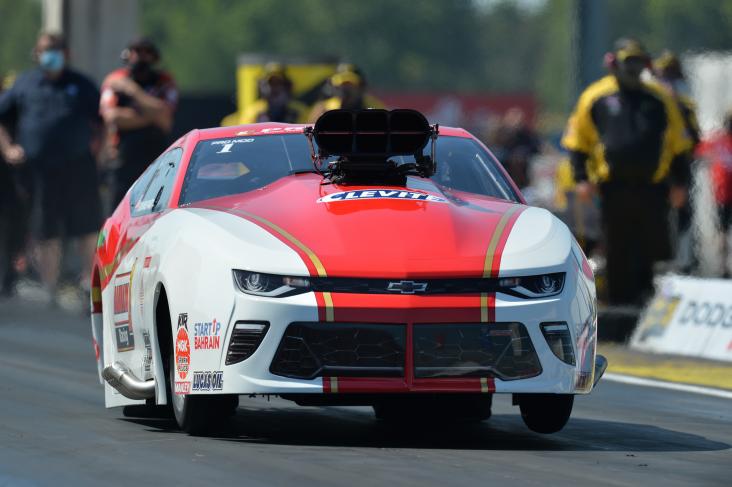 Looking past Jackson’s noise and fury you can see he brings a level of determination to drag racing that’s admirable by anyone’s standards. “Every time I think I’ve got it all figured out,” he says, “[racing] just shows me how much there is to learn and how stupid I really am.” Clearly, he’s willing to put in whatever it takes to run out front. “I don’t care about other things,” he says. “We’re judged on how much we win. If people tell you, ‘It’s not how much you win, but how you play the game,’ those people don’t win a lot.” 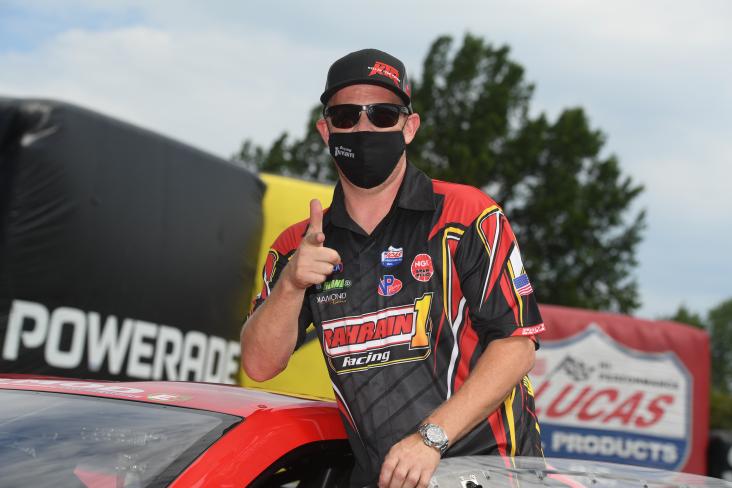 Jackson touts that 90% of winning comes from the work at the shop. “When you grow up grudge racing to put food on the table,” says Jackson, “you realize quickly that the way to beat people is to outwork them.” Of course his hard work doesn’t mean Jackson always wins. Days before the scheduled running of March’s Amalie Motor Oil NHRA Gatornationals, Jackson and his 2019 Pro Mod championship winning Camaro crashed at almost 250 mph during the World Doorslammer Nationals.

“If people tell you, ‘It’s not how much you win, but how you play the game,’ those people don’t win a lot.”

The Bahrain 1 Pro Mod team planned to assault the Gators with four Pro Mod cars (each car with a different power adder) because as Jackson tells it, “we had no idea what was going to happen with parity.” But with the crash, and no time to fix his Roots-blown car, Jackson’s backup plan was to drive Jeffrey Barker’s nitrous car. But then COVID-19 hit and Jackson’s race effort went from wide-open to full-stop quick enough to peg his personal G meter. “[COVID-19] really changed how we’d race in 2020,” said Jackson. “You didn’t see a whole lot of those moonshot runs like what we had in 2019. A lot of that was just our inability to tear the thing up. If you go out there and you blow it up in Q1, and you’ve only got two rounds to qualify, you’re behind the eight ball. 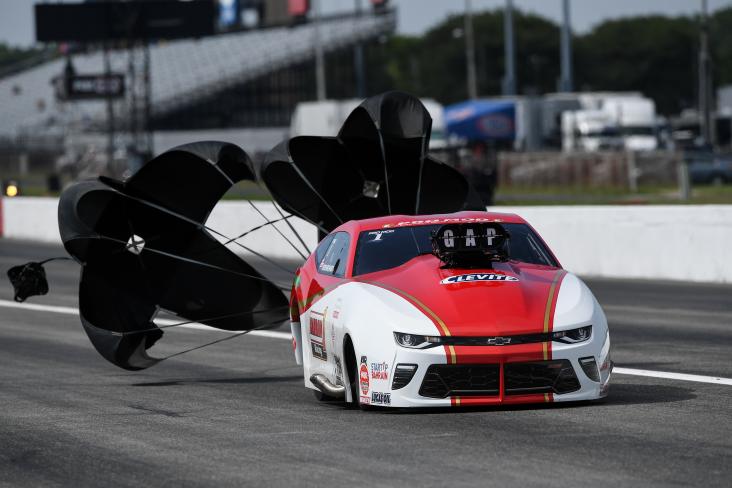 “Fast” qualified in 12th place with a 5.909-second run at 242.89 mph when Pro Mod racing relaunched at the Lucas Oil NHRA Summernationals at Indianapolis, and was put out in round one by Brandon Snider. Two weekends later his qualifying improved to No. 3 at the Dodge NHRA Indy Nationals, but after a starting-line burndown with Kris Thorne, Jackson’s holeshot couldn’t hold him off at the finish line. It wasn’t till the U.S. Nationals that Jackson’s team was able to put together the package to defeat the field and beat Clint Satterfield, Khalid alBalooshi, Snider, and Todd Tutterow to bring home the U.S. Nationals Wally. 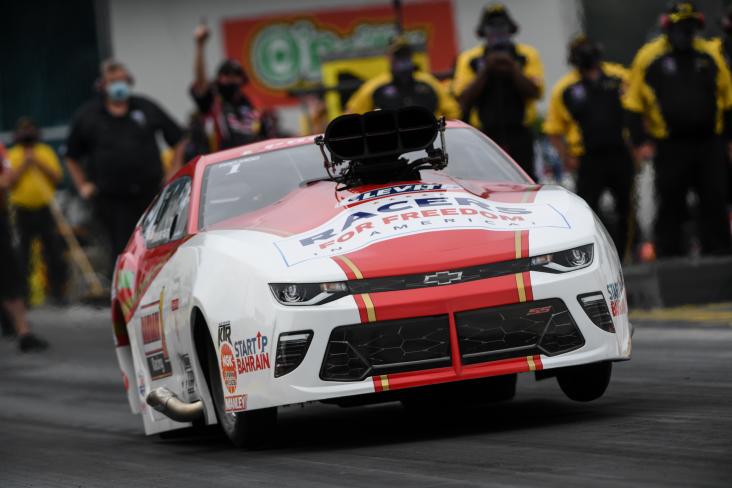 But then at Gainesville, a race that still eludes Jackson, he was third quickest in qualifying and got knocked out of competition by teammate alBalooshi in round two. By the time Pro Mod was at AAA Texas NHRA FallNationals it became clear to Jackson that Snider was the one who could close the door on his hopes for a second championship. With the same power under the hood, Snider’s reaction time advantage (.025 to Jackson’s .037) was enough to beat Jackson’s quicker and faster run in their first final round together. Jackson’s runner-up finish did allow him to regain the points lead over Snider, only to give it back after a surprising first-round loss to Alex Laughlin in Houston.

Jackson says the highlight of 2020 was, “sitting opposite of the points leader (Snider) in Vegas and having my destiny in my own hands. Our race was the only head-to-head championship-deciding matchup of the entire organization. To be able to do that for the fans and be able to soak in that moment…that’s what it’s all about.” Jackson concedes Snider is a tremendous competitor and that he’s “been crushed by him as much as [Snider] has been crushed by me. We were swinging at each other all year, and I know how disheartening it is to lose. I had just lost to him two events earlier by two-thousandths of a second. But being able to bask in that do-or-die moment was definitely the highlight of the 2020 racing season for me. That’s the type of stuff that goes into my scrapbook.”

Jackson’s 2021 goal is to not take his foot off the gas. “It’s really hard to win two of these championships. Everybody’s got their sights on me, and they feel like they have nothing to lose. So we’re trying to focus on being efficient. We have to be able to do this while still maintaining a program that’s capable of hitting the long ball. We’re working on some new stuff to make more power in 2021, you may see some new faces coming in and out next year. We’ve got a brand new racecar being built with some really exciting technology and some stuff that we’ve been working on for a long time. When we unload it in Gainesville it’ll be ready to race. My offseason began the moment they handed me that Wally in Vegas and we were pushing our car back to the pit. I looked around at my guys, and I said, ‘All right boys, 2021 begins right now. Let’s get started on it.’ “ 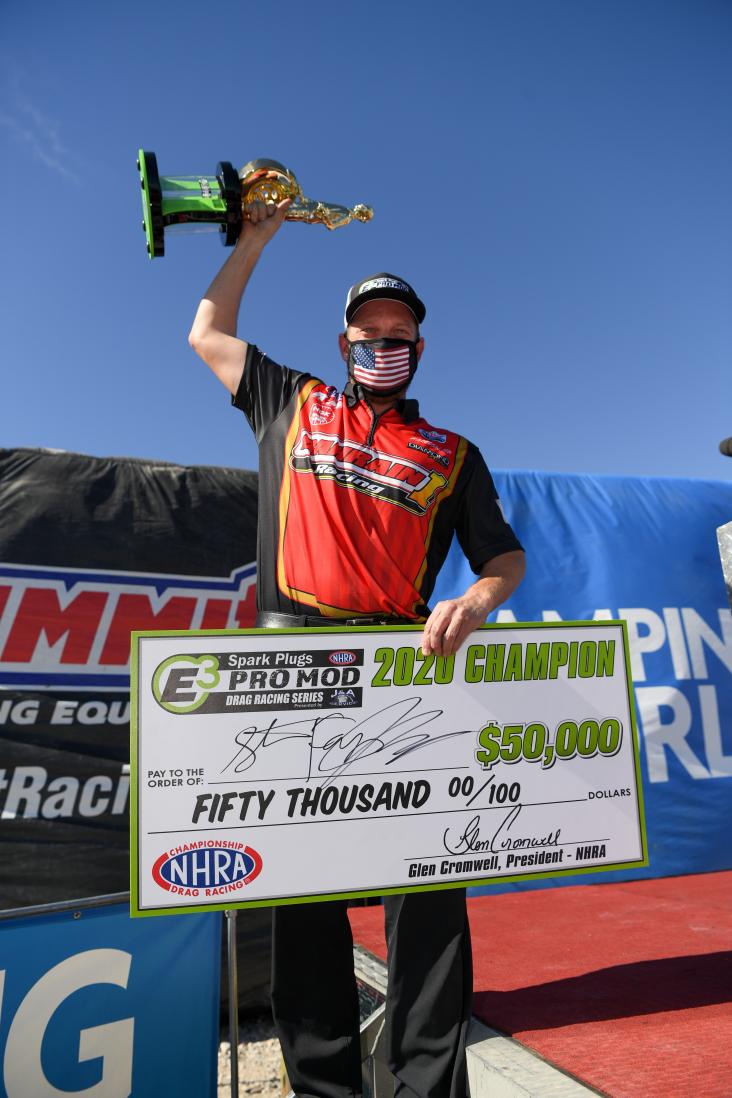