Back from another thrilling Gatornationals weekend – how ‘bout that Jonnie Lindberg making it to the Funny Car final in his debut? – with just enough time to catch my breath and do some scribbling for National Dragster before heading for Las Vegas next week. I’m on a whirlwind tour for the first half of the season, and trying to keep tabs on everything, so this week’s column’s going to be a little bit of this and a little bit of that.

First, thanks to all who heeded my plea for helping tracking down errant links in the newly archived Insider columns of yore, especially good ol’ Robert Nielsen, who went as far as to create an Excel spreadsheet for me. Thanks, pal. I haven’t gotten a chance to begin to address those nor to pull over more archives, but it’s all on my list. I’m very eager to have the columns restored to their glory for all to continue to enjoy. (If you've got one -- or a thread -- you'd like to see restored ahead of schedule, drop me a line.) 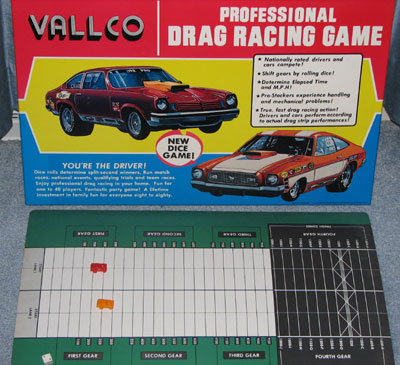 Longtime fans of the sport may remember the Vallco Drag Racing board game created by Greg Zyla back in the 1970s. Back before computers, smart phones, and gaming systems, this was how we played drag racing (when we weren’t playing with our Hot Wheels). I wrote a column about it a number of years ago that you can find here: Racing on the cardboard quarter-mile. I jumped ahead in the archiving to be able to get this one over, and Greg dropped me a line the other day to say that he still has some copies to sell.

It’s not the completedboxed game – he long ago ran out of those – but all of the parts and pieces are there to have your own retro national event. You can't have more fun of the unplugged variety. 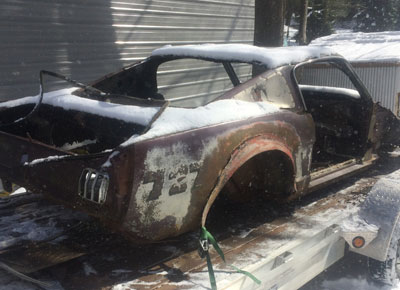 Michael Miller sent me along the photo here that he believed to former Funny Car racer (and sometime Insider contributor) Jeff Foulk`s 65 fastback Mustang B/FXer. He found it in an abandoned salvage yard in Pennsylvania, a facility that hasn`t been open since the ‘70s. He asked if I could put him in touch with Foulk, which I did, and Foulk was able to confirm that it was his car.

“Yes, that indeed is my car. In the form it last raced, it was my '66 C/XS car. The wheelbase had been altered 3.5 percent, and the engine set back 17 percent. It ran my original 348-inch small-block Ford stroker engine, that eventually migrated into The Finagler Cougar injected nitro Funny Car, in 1967. The car did start out as a '65 B/FX Mustang 2+2 Fastback.

“I readily recognize the car, based on three things: my 727 number [ pre- NHRA permanent numbers], the rear fender flares. and the riveted aluminum covers, where the stock Mustang rear louvers were. Further identification would be a roll bar [not cage], and no cowl [due to the engine setback]. The hood [ f it is still there] was one piece fiberglas, with a unique rear extension, that replaced the cowl. Also. the front shock towers were held together with a cross bar, that bolted to the shock towers, because the original support struts had been removed in the engine setback. From what I see in the picture, I am sure this is my car.

“I always wondered what became of it. I don't think it ever raced again. We still had it sitting in our yard, in late 1968. The entire driveline had been cannibalized to build the Cougar. Two guys, who were partners, went to Atco with us in November '68, to watch us run the Cougar. They had been interested in the Mustang, and were impressed enough with the Funny Car scene, that they bought the car. I heard they had a falling out, never got the car running, and I never heard of it again. I figured it was in some barn.”

Mel Bashore, who runs the informative and well documented (if a little maudlin) website, Drag Strip Deaths, has a new project of a more earthbound nature, Drag Strip List. He touts it as “the most comprehensive encyclopedia of historic U.S. drag strips ever compiled.” The site includes histories of all the dragstrips that opened at least 50 years ago, and also includes a section where readers can submit their memories (and photos) of old strips where they either raced or watched. You can find it here.

“Growing up in New Jersey, I was a fan of Youngblood’s work in magazines,” he wrote. “On a trip to California, my dad somehow met the people putting together the Wonder Bread deal and gave me some autographed Youngblood prints. I was 14 and wanted to be the next Youngblood. Somehow I found his address and started writing him. He’d send back large envelopes with small illustrations and comments on how I could improve my work. Then I became aware of Circus Custom Paint just five miles from my house. So again I wrote [Bob] Gerdes and Mr. J [Julian Braet ] a letter. They invited me to visit Circus, and to design a paint scheme for Swensen & Lani’s ‘74 Vega Funny Car. I’m barely 15 years old. The scheme was used on the car until it burned at Englishtown one night.

I ended up befriending Bill Leavitt, he allowed me to design his ‘75 Mustang and ‘76 Monza Funny cars. Besides designing paint schemes, I was also doing illustrations of my favorite cars to take to events with the hopes that the driver(s) would buy them…which they did! I’d come home from a national event with a few hundred bucks! As a 16-year-old, it was dynamite. From there it kept snowballing, meeting more drivers, etc. I would usually do three schemes for the drivers to choose from, so two of the three always were rejected. Sadly, I don’t have nearly the documentation I wished I had for all the work I did between 1974 and 1984. Suffice to say I was doing work for drivers across the country. It was a thrill to get to know them, and see my work streaking down the track.”

At right you can see some of his teenage work for Leavitt’s car, and the final outcome at the bottom. Cool stuff! 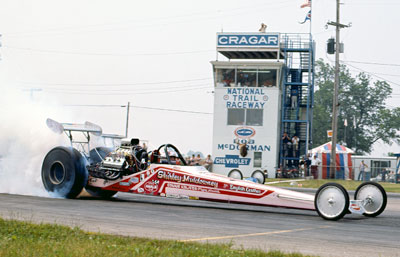 Speaking of the mid-1970s, if you’re an NHRA All Access subscriber, you’ll definitely want to head on over there to see this week’s Flashback Friday, which is the 1976 Springnationals from Columbus, Ohio. The historians among you will already know that this was the scene of Shirley Muldowney’s historic first win in Top Fuel, the first time that a woman had ever won in an NHRA pro class. Plus, a classic "Snake" vs."Mongoose" Funny car final. Who could ask for more?

It’s the fourth installment of oldies-but-goodies on the site, which previous events being the 1961 Winternationals and 1984 and ’92 Gatornationals.

And, speaking of good old video, my Canadian Insider pen pal, Don O'Byrne, dropped me a link to this YouTube video from the 1973 Popular Hot Rodding Championships. I’m pretty sure that I’ve shown it before here, but Don was pretty thrilled by its contents. “Shirley, driving her Funny Car and I was surprised to see that she got the car all crossed up during the backup after the burnout.  Instead she turned it around and drove the car back to the starting line. this is about the six-minute mark.

“More interesting was the Top Fuel Car that blew over at the 300-foot mark..  This one was pretty bad.   I could not figure out whose car that was.” [It’s Paul Longenecker, in one of the wildest blowover you’ll see, with the car dancing on the rear tires while spinning. It’s at about the 7:30 mark – Phil]

“Last item is the Jungle Jim' Burnout Show. The video shows more of “Jungle Pam” backing up  than Jungle's burnouts. Says how much she influence the drag racing world back then.”

Thanks for note, Don. I always love seeing this clip.

A couple of more losses to our world, especially to those who have been around a long time: 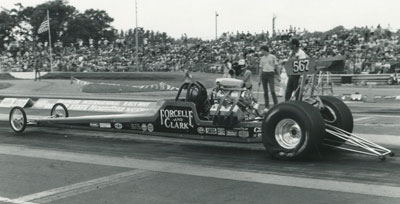 Former Top Fuel and Alcohol Dragster racer Dennis Forcelle passed away recently. He won four national events in Alcohol Dragster -- including his homestate Brainerd event twice (1983 and ’86) -- before moving to Top Fuel later in the decade with sponsorships from Cable Value Network and Simpatico beer. The car ran well enough to qualify in the top half of the field and made two finals in 1988 – at the Mid-South Nationals and World Finals.

Lonnie Denison, part of the team that fielded the Midwest-famous Denison Arlasky & Knox altered, also passed away recently. Again, I haven’t found any info online but longtime Insider readers may remember be dropping the name of this car as the chassis that sat beneath Ron Pellegrini’s Super Mustang (possibly the first Funny Car ever built, depending on your definition. I also took the liberty of migrating that column – which tells of Pellegrini’s role in the class’ history – here: The Johnny Appleseed of the Fiberglass Forest.

OK, that catches me up for the week. Thanks for all of the correspondence, help, and submissions. Keep ‘em coming!