Of the Big Three, Ford has been in this arena the longest. It’s the only Detroit automaker that’s continuously produced a ponycar from ’64 ½ to ’20. It launched its Cobra Jet Mustang drag car (based on the Ford FR500C Grand Am road race car) a year before the ’09 Dodge Drag Pak Challenger, and four years before the ’12 COPO Camaro. That momentum only helps a racing program that’s based on a production car.

Now, 12-years later, the 760-hp GT500 Mustang street car and Cobra Jet Mustang competition car retain striking similarities. But when we talk about what the Cobra Jet Mustang is, we’ve typically only shared the features you can see, who’s behind the wheel, what the elapsed times and trap speeds are, and the connection Tasca Ford has to the legacy of the Cobra Jet. To rectify that, we present a deep dive into the specs that make a supercharged Cobra Jet Mustang capable of competing with the best from Chevy and Dodge on the quarter-mile in the SAMTech.edu NHRA Factory Stock Showdown. 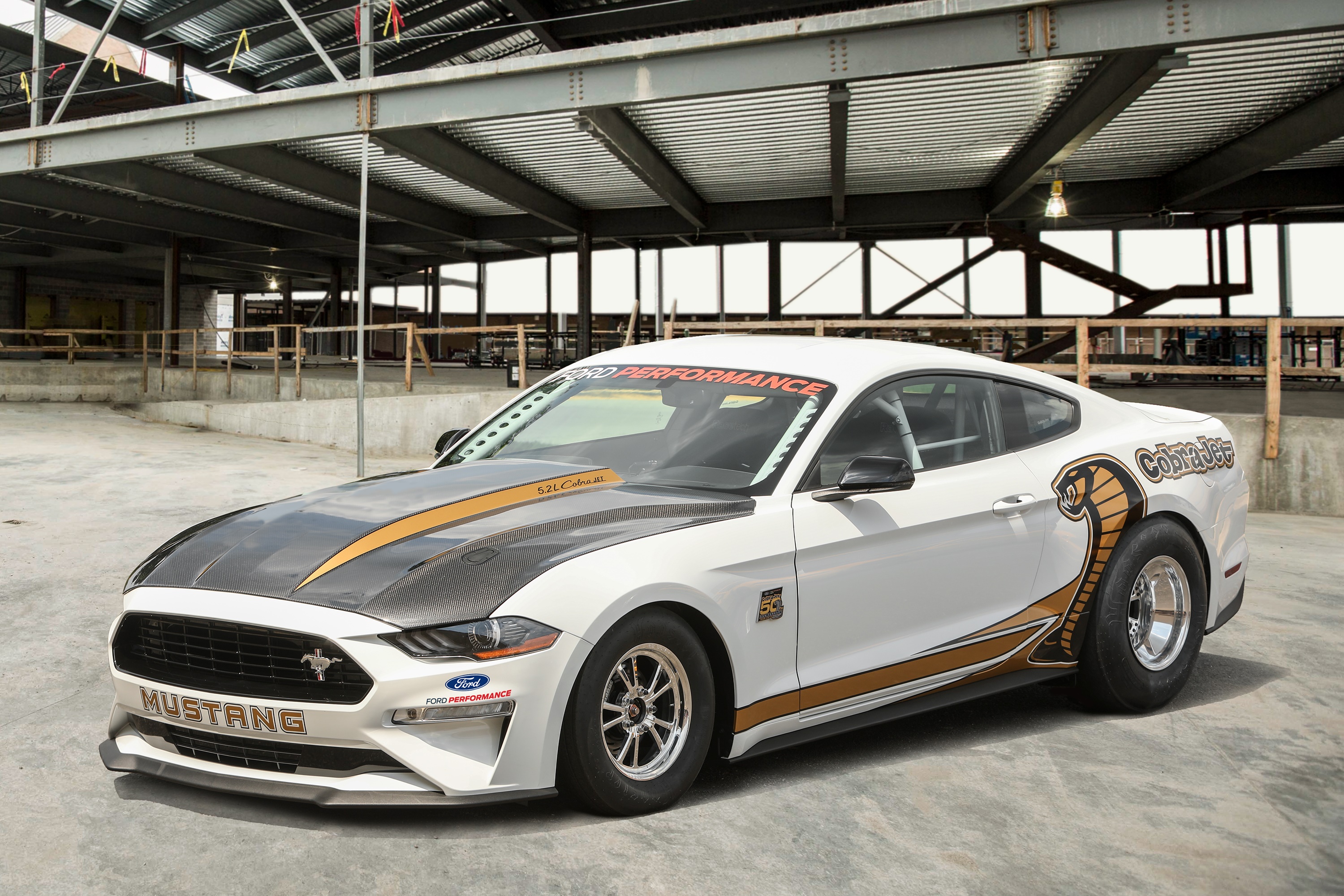 Manufacturer’s goal when racing in SAMTech.edu NHRA Factory Stock Showdown: The goal is to showcase the talent of the Ford team, to demonstrate the capability of the Ford Mustang Cobra Jet, deepen Ford customers’ brand loyalty, and win races that are important to the Ford Motor Company. Fans love seeing the Detroit manufacturers competing at a high level on the track with their factory-based vehicles.

Model year car(s) scheduled to be raced this year: 2019

Car build location: The car starts life as a bare Mustang body at Ford’s Flat Rock Assembly Plant (FRAP) in Flat Rock, Mich. The bodies are transported to Watson Racing, in Brownstown, Mich., which is only a few miles from the plant. There, the body is modified to accept the solid rear axle (the production cars have an independent rear suspension) and to add the safety cage. The body then returns to FRAP to be painted on the production paint line. It then returns to Watson for final body and chassis modifications before being fully assembled on site.

Retail price to buy: The retail price for the current Cobra Jet Mustang is $130,000 before options.

Where customers buy one: Cobra Jet Mustangs can be purchased from any Ford dealer. 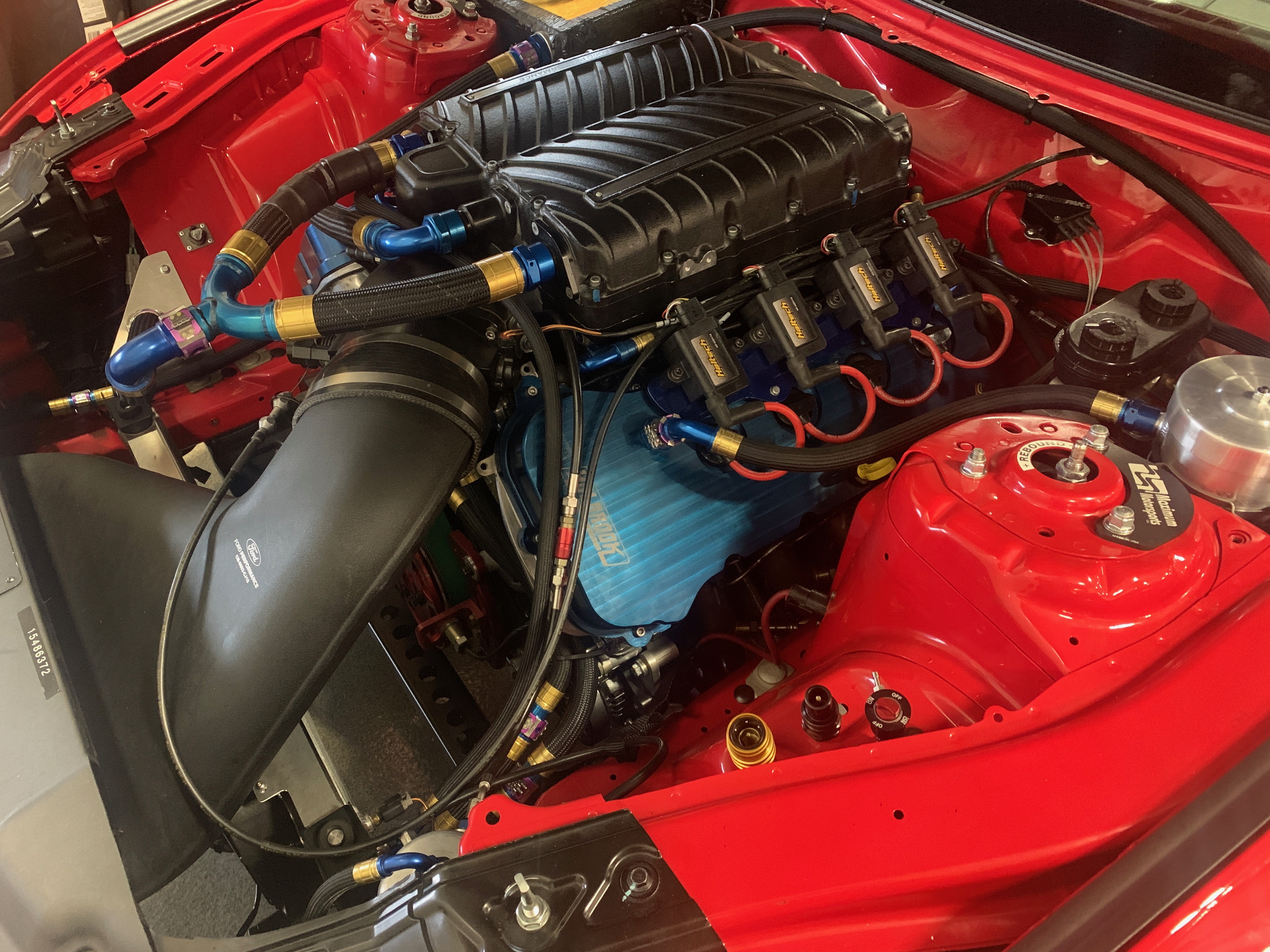 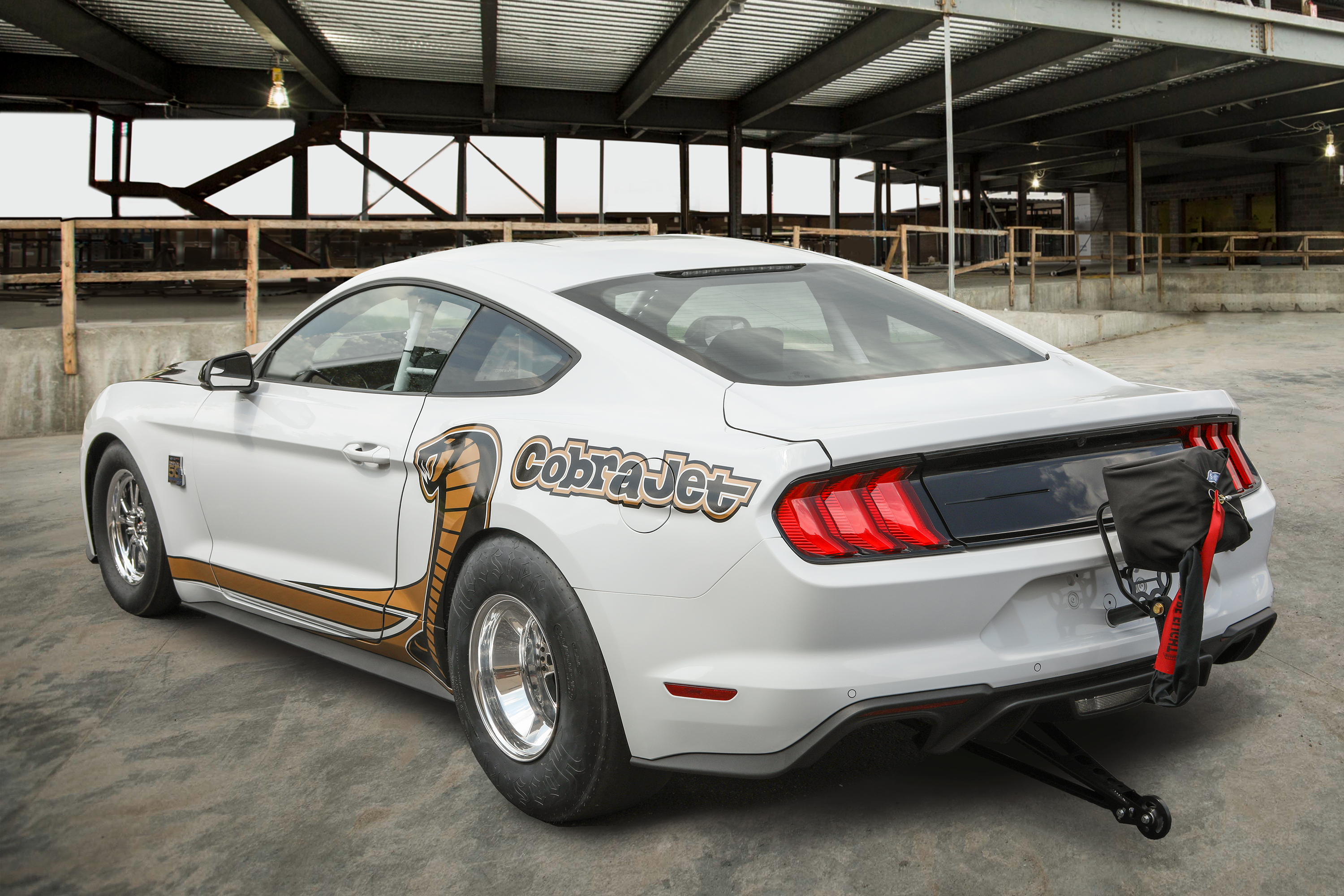 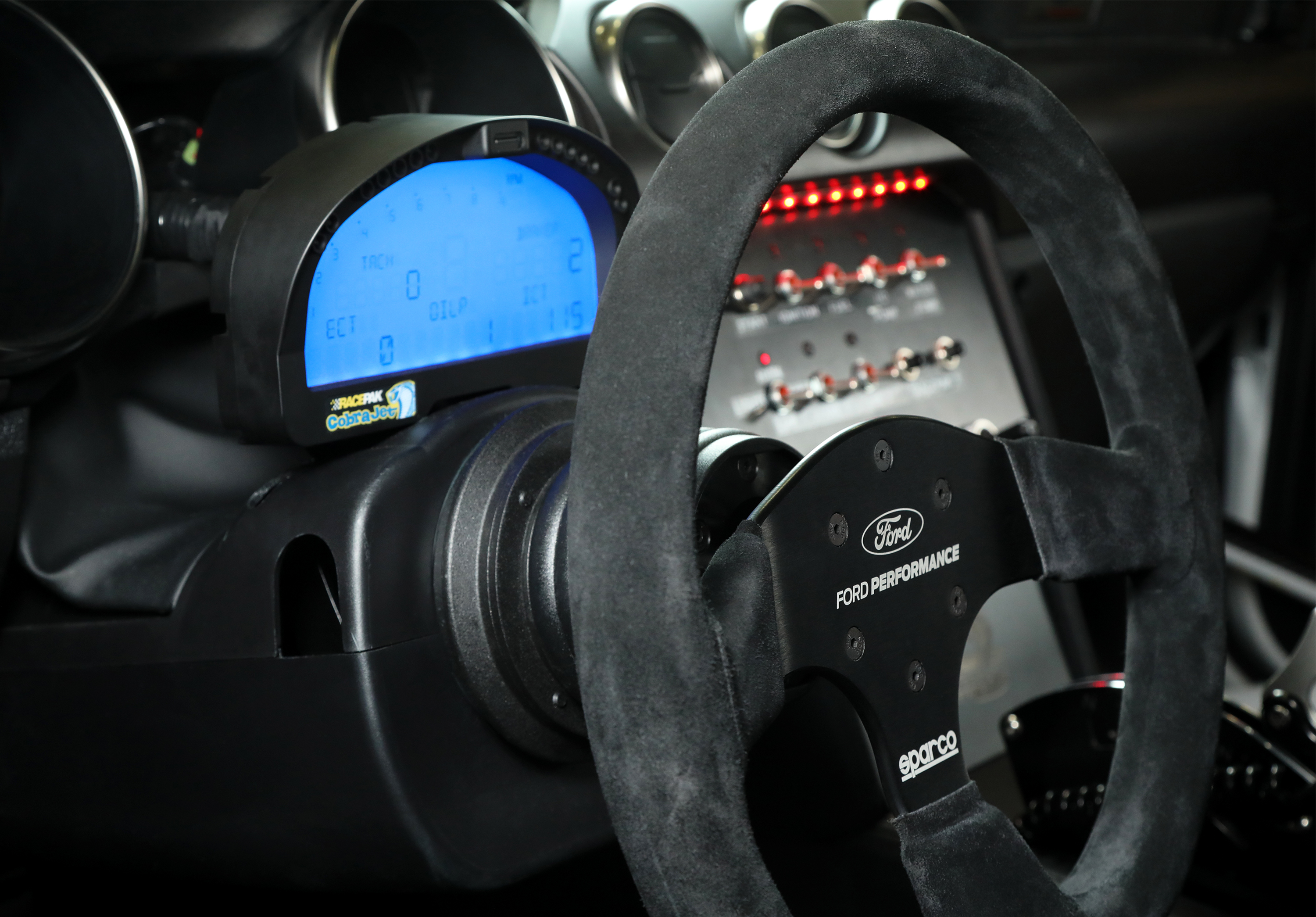 How much of the car is raced “as delivered?” Racers at the SAMTech.edu NHRA Factory Stock Showdown class level generally make significant modifications to the vehicle to be competitive in this class.

How is the current car an improvement over the ’16 version? The current car is an evolution of the previous car with many significant upgrades. Ford focused on improving the power for more exciting passes with faster e.t.’s. Major changes included larger engine displacement, increased compression, improved cylinder heads and valvetrain, larger diameter exhaust headers, and an all-new larger and more efficient Whipple supercharger. To handle the additional power, Ford provided an improved chassis, and the first factory car with an SFI 25.5 spec (7.50-second legal) cage in all Cobra Jet Mustangs. Ford also included, for the first time, a parachute, as required for cars capable of passes at more than 150 mph.

Performance features from the production car carried over into the race car: The body in white from the Mustang has improved significantly with the ’15-to-current version providing an excellent platform to build a race car. The body is very stiff which translates to consistent and repeatable power delivery. The front suspension uses many of the production car parts and provides a great handling vehicle for its purpose. The engine also uses a significant amount of production parts. The cylinder heads, cylinder block, crankshaft, and camshafts are production, or slightly modified production parts.

Exotic materials are used on the car: The Cobra Jet Mustang hood is made of carbon fiber. 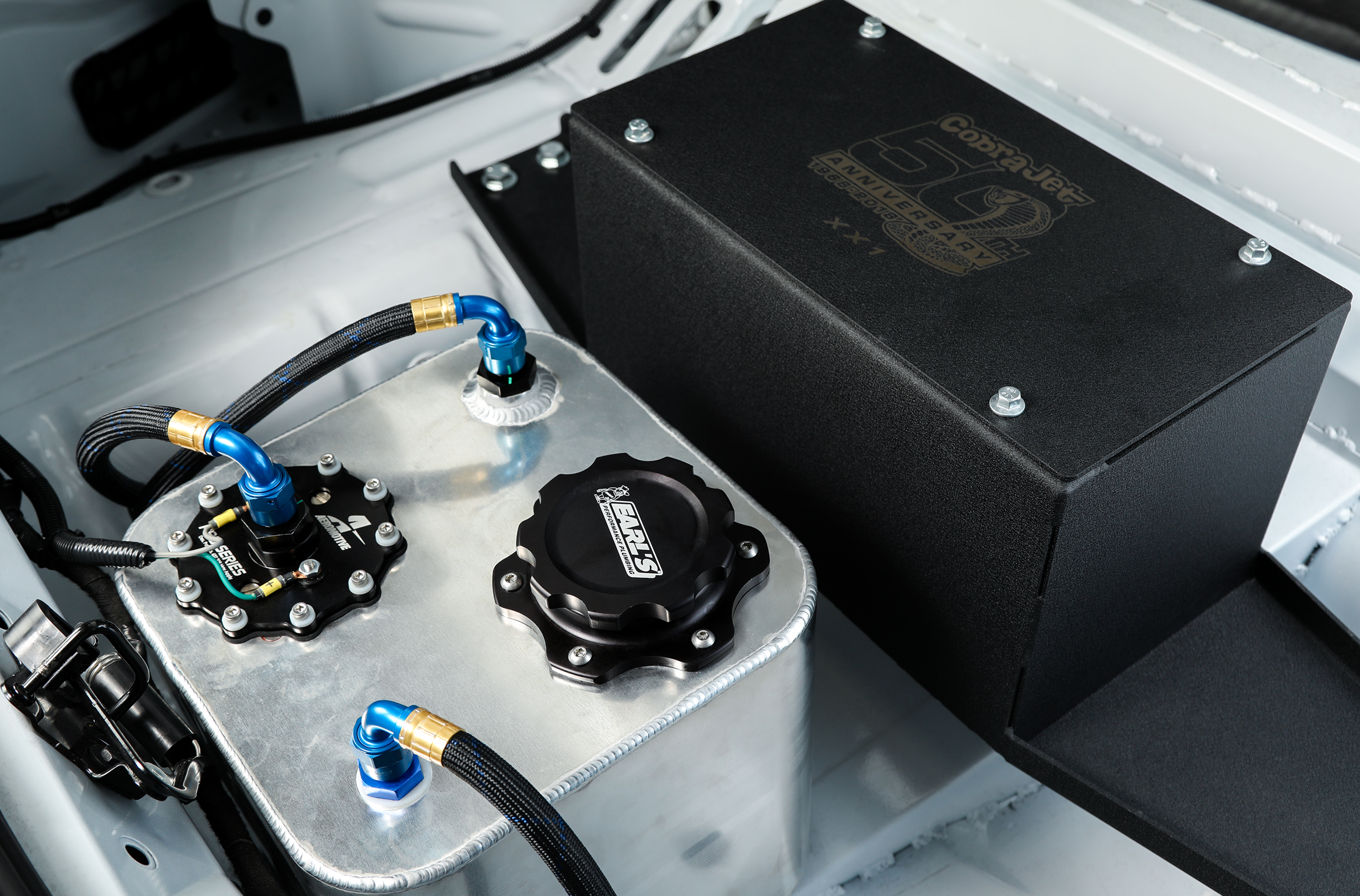 To print out your own copy of the 50th Anniversary Cobra Jet owner’s manual. Click here.